But that's mostly because every time he speaks it's so irksome that I feel like signing up for the Red Lanterns. 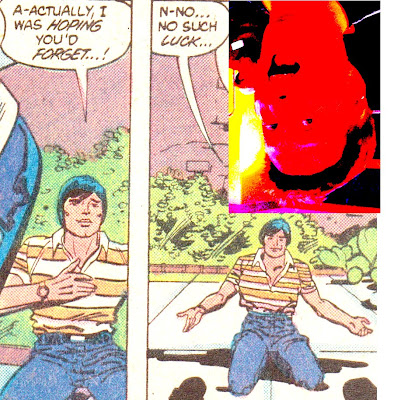 Yeah, I wish I could forget about you, too, Actor John Ostrander!

And he speaks SO DARNED MUCH.

Because he's an actor, you know. 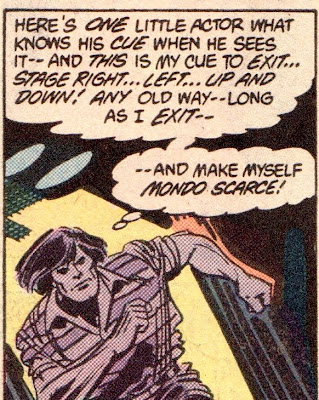 He's a confluence of character cliches and verbal ticks that are all among the Sure Signs of Bad Comic Book Writing, including the Wacky Neighbor, the Comic Relief Victim, the Person Who Is His Profession, the Mouthpiece of False Street Talk, etc. The character Actor John Ostrander would be high on the list of anti-character witnesses in the Trial of Paul Kupperberg for Crimes Against Prose and the Comic Book Reading Public. Although I'm sure Paul is a wonderful person. Who works for Archie, now, by the way. Not that there's anything wrong with being a minion of the red-headed devil who destroyed America's original patriotism-themed superhero, the Shield.

Anyway, fair play dictates that credit must be given where credit is due. Even when it's to an odious toad like actor-neighbor John Ostrander.

And you have to give credit to a supporting character who, even though his life is threatened, manages to use his fear-induced stutter as a means for sputtering out ... 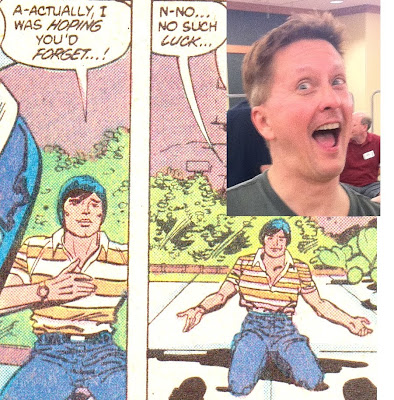 Didn't notice it the first time, did you?

What haiku can YOU compose to damn or praise John Ostrander or Paul Kupperburg?

Hapless thespian,
Still your stammering tongue now
We all want you dead.

As we all know, DC was such a poorly-written mess by 1984 or so that it seemed like a good idea to get rid of Supergirl (drawn by Carmine Infantino), Barry Allen (drawn by Carmine Infantino), and the multiverse and try to rebuild it all Marvel-style. Which was the wrong cure based on a misdiagnosis; all that was needed were some actual good writers to write good stories about DC characters.

Infantino's art:
The kiss of death come Crisis.
Blockheads get the axe.

Then again, nothing sees print without the editor's approval, so I shouldn't blame just the writer. Editorial incompetence at DC doomed the multiverse.

Poor, struggling, actor-neighbor John Ostrander. All he wants is a good role, to have some drinks with Linda, and maybe stare at Mesmer's geometrically-impossible third nipple for a while. Sadly, the reboot may erase him from DC lore forever. Therefore, I offer up Ostrander's farewell haiku:

Of course, since John didn't survive the last four or five reboots, I'm betting on his chances for this one. Unless it's as comic relief for Static. Actually, I'm hoping angry new Supergirl will beat the crap out of him for being a pushy sexist blabbermouth.