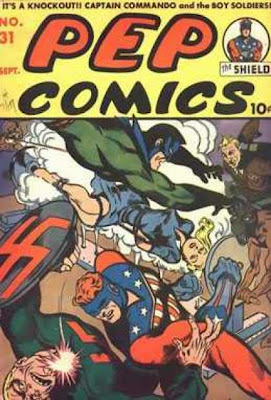 "Today ve are cooking Madonna-kabob. Many vould broil Madonna-kabob, but ze Nazi vay is to cooking it by STEAMING it. Zis leaves in all ze natural vitamins und preserves ze flavor... provided you do not steam too long, ja?

When, oh when will I learn not to drink Dr. Pepper while reading the Absorbascon?? Scratch another monitor....

I see Dusty's still not back from "camp."

The idea of a Nazi cooking show doesn't faze me. Nazi Germany actually had television broadcasting before most of the rest of the world, IIRC.

What I don't understand is Captain Nazi from Fawcett Comics hosting the show in the Pep Comics universe! This was long before both cultures were assimilated by the multiversal Borg that is DC Comics...;

Yeah, that Max Schmeling grill gag was great. And you are correct that steaming generally produces better results when cooking than broiling.

Oddly enough, my German Grandmother DID have this habit of pressure-cooking just about everything. So you hit THAT nail right on the head.

And yes, where oh where is doughty young Dusty?

Oh, Sally, my stomach grew up knowing only two kinds of cooking: German and Chinese.

My stomach knows more about German cooking than it wants to.

I can't remember who it was, but I seem to remember seeing a stand-up comedian who also grew up on German cuisine, theorize that the real reason Germany was always invading other countries is that they were looking for decent food.

(Speaking as someone of partial Russian descent, if that is the case they sure got on the wrong train by invading Russia.)