Well, Riggley, the owner of the Badgers has been felled by a poison blow-dart before revealing the identity of the Black Toad. Suddenly, his men (dressed fabulously in traditional villain colors, I note) pop out of nowhere with machine guns and stand therefor.

Jeepers creepers, what the heck is that shield made outta? [That's a rhetorical question. I know what it's made out of. Do not tell me. Geek.]

Fortunately it simply doesn't occur to them to shoot Cap in the leg. Why doesn't anyone in comics ever think of shooting people in the leg?

This being the Golden Age and all, Bucky saves Cap's leg in the most amusing and ironic way possible: hitting the goons in the face with baseballs. 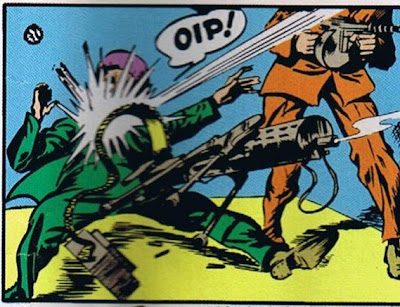 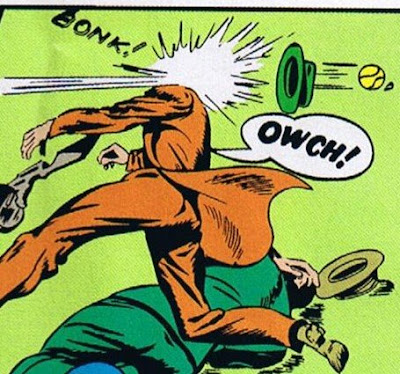 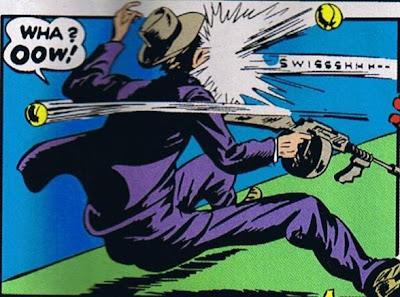 Give that fan a contract! 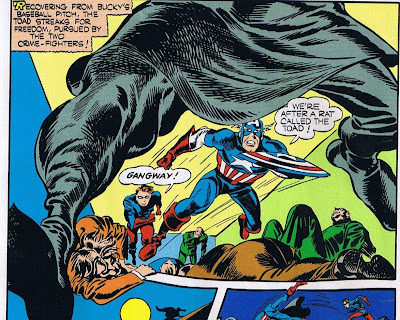 Perhaps "Black Beaver" might have been a more appropriate nom du crime.

Well, I might not like ant-cam shots, but Cap seems to, as he roughly pins the Black Toad to the ground beneath him, and orders him to take off his clothes: 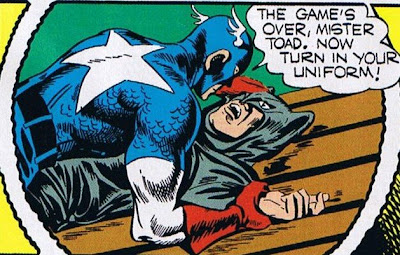 And the Black Toad turns out to be.... SOMEONE WE'VE NEVER HEARD OF!

"And I would have gotten away with it, too, if hadn't been you snoopy kids ... and yer dog!"

Chuck McArthur, the team's manager, was the guy we saw shadowed in the first panel of the story, making insinutations on the safety of the team's star players. This tells us: Riggley was asking for it. He pretty much deserved to die. I mean... would you hire a manager with sharkteeth?

So, as you'd expect the Black Toad gets imprisoned.

Guess that explains why we haven't seen the Black Toad again..
Posted by Scipio at 8:22 PM

Well, of course you know what Captain America's shield is made of. Something that impervious and resistant to damage could only be made of one thing.

Well, that certainly made for one HECK of a day at the ol' ballpark! Sadly, the Badgers couldn't maintain the level of gratuitous violence at their next game, and attendance fell off..drastically.

You've got that right, Sally. At this point, I think we're about two years away from "X-Treme Baseball" to lure today's citizens back into the ballparks.

A couple of years ago they built a brand-new ballpark in nearby Philadelphia. I've never been, but I've heard about it from folks who have. They say it's a great place to take the kids, because they have bounce huts and a Build-A-Bear station and lots of other stuff.

Why would they need all that, if the kids are watching the game? Short answer is, they aren't.

Build-a-Bear stations? At a ballpark?! This is why I can't stand the majors anymore.

Sheesh, bring those kids to a AA game for some real baseball.

The parallels between this story and the 2009 season of the Washington Nationals are uncanny.

Wrong.
Cap's shield is made from the hanging chad of a giant Florida voting ballot. Impervious to bullets AND public scrutiny.

Why doesn't anyone in comics ever think of shooting people in the leg?

You know, I had the same question when I read the "classic" Amazing Spider-Man Annual #15.