Captain America Week! Day Four: Where's the Anthill Mob when you need them?

When last we left "Death Loads the Bases", Captain America had deduced that a thrown baseball, was in fact, a bomb. 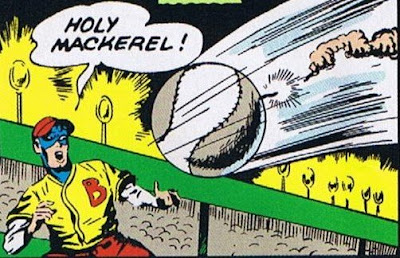 The hissing fuse was probably his first clue. So, exactly who do you hire to replace a pitcher's ball with a bomb, without anybody noticing? Abra Kadabra?!

Anyway, Cap explodes the basebomb with his America-vision, or something. Which has (what I found to be) the very amusing effect (for no apparent reason) of causing the Black Toad to run out into and back and forth in the stadium... 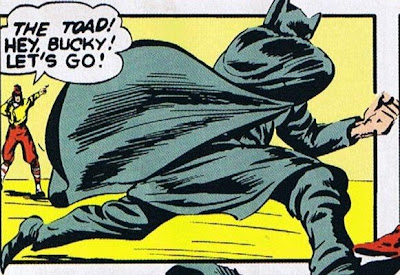 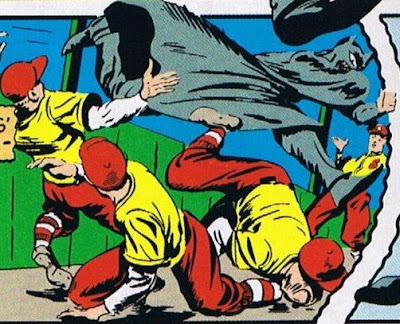 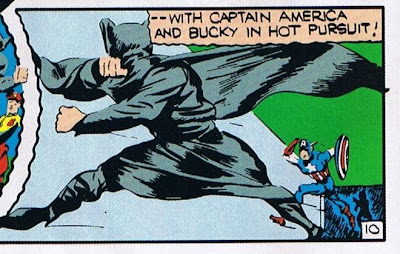 ...looking for all the world like the Hooded Claw chasing Penelope Pitstop.

Cap and Bucky give chase (to the tune of old timey peye-ano playin'), and eventually corner the Toad in a room. But he hits the light switch, plunging the place into darkness! Then, in a scene familiar to anyone who's ever seen a Scooby Doo episode on television, when the lights come on, they've grabbed...


... NOT the Black Toad. It's Riggley, the owner of the Badgers team. Very unfortunate for Riggley, since he's figured out the Black Toad's identity and rather than announcing it, he announces that he's about to announce it.

As anyone who's ever seen a thriller or mystery movie on TV knows, announcing that you're about to announce who the killer is is the surest to get yourself killed. Sadly, this is 1941, and television hasn't been invented yet, so Riggley has no idea he's dooming himself.

Sure enough, he's blow-gunned down and falls dead faster than Angela Lansbury as Salome Audubon in Agatha Christie's Death on the Nile (1978).

But much more vocally.

The moral of this section? Watch more television, kids.
Posted by Scipio at 5:15 PM

Do not even get me started on the Hooded Claw.

Ostensibly, he wants to kill Penelope Pittstop because under the mask he's her guardian, Sylvester Sneakley, and if she dies and it doesn't seem like he did it, he'll inherit all her money. Okay. I buy that part.

But the Hooded Claw captured her at least twice per episode, and instead of just putting a bullet through her candyfloss-filled skull, he put her in death traps so elaborate, over-conceived, and downright silly, Rube Goldberg would have pulled him aside and said "Sparky, we've got to talk."

Paul Lynde, whose voice was very effete, did have a very menacing laugh though!

I want to see the Toad inhale instead of exhale with his handy dandy little blow gun.

This is certainly a more exciting baseball game than the LAST one that I saw.

I'm just reminded of the Simpsons episode where Homer tries to give up drinking for a month. He's at a baseball game, and he's the only one without a beer. He cries, "I never realized how boring this game is!"