Why Magnus is Better than the Majority of Americans 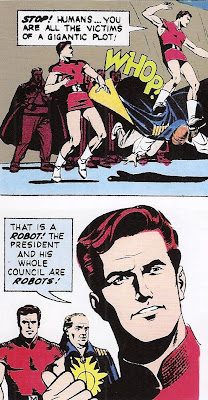 Because Magnus was not fooled by the Bush Administration.

If ONLY Bush was an evil robot instead of an evil puppet instead!

I must beg to differ. The majority of Americans weren't fooled by GWB either. He's only using the toilet at 1600 PA Ave because nine guys in black robes got to vote twice.

The guy he's jumping on is clearly a Supreme Court justice, and the gold braids (plus the hand-stitched design in front) make me think it's Rehnquist.

Then again, the "whop" sound when Magnus lands on him points to Scalia.

TT "He's only using the toilet at 1600 PA Ave because nine guys in black robes got to vote twice."

If Clark Kent were in the room, he wouldn't let this stand. So I must live down to my screen-name, and, uh, interlope, in a way that shall likely be accursed.
Regrettable as the outcome is, the truth is, to tediously quote Wiki, that "The National Opinion Research Center at the University of Chicago, sponsored by a consortium of major United States news organizations, conducted a Florida Ballot Project comprehensive review of all ballots uncounted (by machine) in the Florida 2000 presidential election, both undervotes and overvotes, with the main research aim being to report how different ballot layouts correlate with voter mistakes. The total number of undervotes and overvotes in Florida amounted to 3% of all votes cast in the state. The findings of the review were reported by the media during the week after November 12, 2001."
. Shorter version: the votes were counted, and the bad guys won. They actually won.
. It's understandable and fair to cry about it for eight years. But the thing you did in that comment, TotalToyz, only rhymes with "cry."

This will not truly have success, I consider so.
installed updates | restaurants in Indianapolis | best cookie recipes