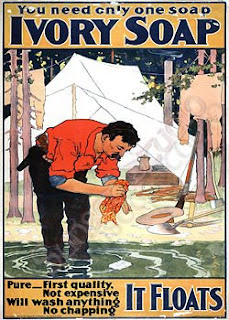 Today, I want to talk about Ivory Soap, politics, and comic books.

Ivory Soap is, of course, the greatest triumph that advertising has ever had. Even greater than the transinframetatextual product placement in Eureka (which is so stunningly bald that you have to consider it a PLUS rather than a negative, particularly since it means lots of Sheriff Carter shirtless *swoon*).

Ivory Soap is the greatest triumph of advertising -- and will always remain so -- because its makers took the product's overwhelmingly damning defect and made it the very selling point of the product. "So pure, it floats."

If you think about for even two seconds, it will hit you; soap isn't supposed to float. For soap to float it has to be less dense than water, and for it to be less dense than water, it has to be ... full of air. Which, of course, Ivory Soap is. That's why a bar of Ivory Soap the size of a miniature Dachshund disappears after about one week of shower usage. Not only have you been convinced to buy AIR, you been convinced to buy Ivory Soap precisely because it's full of air.

This takes a special kind of Harold Hill-ian chutzpah. Oh, perhaps, there was a time (say, 1891) when there actually was a great utility to the floating function, because most people took baths instead of showers. Even then, two seconds of thought could undo that advantage, but, of course, advertising's goal is not to allow you to think that long, anyway. You aren't supposed to think about the product, just feel about it, and feel good.

This takes a little cleverness: "Ivory Soap: it's full of air!" is not a particularly good slogan. "It floats!", however, is 99 44/100% genius, and had Proctor & Gamble cleaning up for decades. It's BS so pure it floats.

Once you recognize the principle, you can recognize it everywhere in salesmanship. The aforementioned Harold Hill sells band uniforms will the promise that there's no extra charge for the four weeks of anticipation that it takes for them to arrive. I "sell" Things That Made Me Happy by touting that it doesn't give you information you want.

And in politics the principle is in full swing. Inexperienced candidates are "fresh outsiders". George Bush isn't dull-witted, he's "a man of the people" or "not elitist". Instead of being a guest on Jerry Springer, Sarah Palin becomes an example of middle-class family values, precisely because her underage daughter got pregnant and now has to marry the baby-daddy.

Selling its candidates on the virtue of their flaws is more a Republican tactic, I think. The Democratic Party simply denies that its candidate have flaws at all, or pushes the idea that those flaws are private and utterly unrelated to their function as our representatives. In short, in this regard, the Republican Party is Marvel, and the Democratic Party is DC. There; that'll give you something to argue about at the comic shop today!

Armed with the Ivory Soap Principle, how would you sell some of DC's characters?
Posted by Scipio at 6:38 AM

3 Legions for the price of one!

So, Hal Jordan is the Bill Clinton of the DCU? -->

Batman--now with eight titles a month!

DC Classics collection Batman: The Annuals--we're not afraid to reprint the reprints!

Martian Manhunter: A common weakness for the common man!

The entire Republican about-face about "moral values" in light of Sarah Palin's daughter's teenaged, unwed pregnancy just has me convulsed. Funny...those same pundits who are now bloviating about how it is only the family's business were sure full of wrath when Britney Spear's little sister got knocked up.

Wonder Woman:
Strong like a man, made by a woman!

Aquaman:
Never the same character in any series!"

Jonah Hex:
Scarred for your pleasure!

Green Arrow:
Being a dickhead isn't just for Republicans anymore!

Superman:
So pure, he floats!

Allen those were great...those would so totally work...I loved

Wonder Woman:
Strong like a man, made by a woman!

Okay here are some of mine.

Booster Gold: What's done is done and then redone again.

Donna Troy: We have no clue what to do with her so we'll just add her as a bonus.

Okay these are bad I know...

The Aquaman slogan should be the much less awkward:

A different character in every series!

Superhero Comics: The Stories You Love, Told Again and Again!

Power Girl: "So busty, she floats!"

Pantha: She lifts and separates!

Nightwing: Not just Superman in Batdrag!

Um, Dale? You're doing it again. You can stop it now.

OBSIDIAN - with 100% more "man to man liplocks" than the leading competitor!

"Wonder-Dog: Now with extra surprise inside! (Hint: It's Wendy.)"

Um, Dale? You're doing it again. You can stop it now.

Another example of the Ivory Soap Principle: Kentucky Fried Chicken. Oh, it's not "incredibly greasy". No, it's "finger-lickin' good"!

By the way, thanks for the link to the microwaved Ivory soap trick. Now I have to figure out a way to trick a co-worker into microwaving a bar of Ivory soap. (I already convinced one of my colleagues that the best way to get coffee stains out of their mug was to put about an inch of baking soda in it, then add half a cup of lemon juice.)

Geo-Force: When You're Tired of Excitement

More Action, Per Degaton, Than Any Villain Ever!

Doctor Sivana: The Villain So Puny Even You Could Beat Up, and So Obnoxious You'll Want To.

With my friend's approval...I am adding this one to the bunch.

The TRUE origin of Donna Troy -collect ‘em all!

Wendy and Marvin: So Important ONLY ONE COMIC could contain their story.

Supergirl: Too Powerful for one writer to handle.

I swear to God, I just had a conversation about Ivory Soap at the check-out counter yesterday, based partially on my having taken note of stupid Ivory at Target the day before (while buying Dial.) I even quoted that slogan as part of the awkward, obligatory dialogue. Freakin' weird, man...

My father ran a sewage treatment plant. Whenevr I think of Ivory Soap I remember him saying that if what his plant produced was only 99.44% pure, we'd all be in trouble.

Gosh! I've been wracking my brain trying to come up with a slogan half as entertaining as many of the ones I've read here. Some are hilarious.

Find the new Inferior Five- every month in Infinity Incorporated!

I had one about Tor and it's lack of dialogue, but I just couldn't form it right without being really snarky about Joe Kubert, and I didn't feel like going there.

Flash comics since OYL: "See what happens when the Fastest Man Alive... is forced to a screeching halt!"

Benes on JLA: "See the World's Greatest Heroes! Their powers, their courage, their values, and their anatomy are like nothing humanity has ever known!"

I'm an advertising major and I freaking LOVE that Ivory Soap story. God, I remember how my prof used to relate that to us and make us realize what exactly we're doing!

Anyway...let's see if we can come up with a good slogan...

Slightly on topic: the origin of a soft drink popular even today.

The drink began as "Bibb-Label Lithiated Lemon-Lime Soda". That's right, "lithiated". It had lithium in it, and they advertised it as having lithium in it; back in the 20s, lithium was believed to have tranquilizing effects. "Takes the ouch out of grouch" was a popular slogan.

But they soon realized that "Bibb-Label Lithiated Lemon-Lime Soda" was a bit exhaustive to order at a drugstore soda fountain; they needed a shorter name. So they took the atomic weight of lithium, which is 6.93, and rounded it UP to 7.

I know this is a bit late, but I had to add a couple that came to mind.

"DC: The only place for Judd Winick."