Sims 4: Ollie, Eye of the Storm 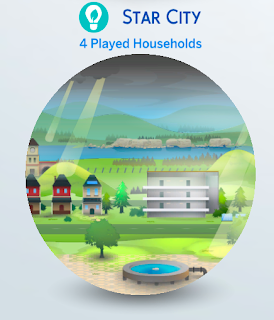 As chaotic as the Sims can be (answer: VERY), you'd imagine that Oliver Queen, center of the Arrowverse, man of a thousand supporting casts, notable hothead, renegade, and rabble-rouser would be one of the most chaotic of all.

In fact: no.  In what is apparently a Sims version of comic book irony, no matter what happens Ollie is NOT chaotic. Ollie himself always seems... pretty mellow, no matter what chaos is going on around him, which is good since ALL IS CHAOS AROUND HIM.  Ollie isn't chaotic; he's some kind of chaos generator, like maybe his mother was a Mandelbrot.

I set him up in a nice big industrial style residence (a 'converted former factory'), and for roommates gave him Roy Harper, Dinah Lance, and Rene "Wild Dog" Ramirez, because I like Wild Dog.

Pool in the back, gym in the basement. Rene to friend/cook, Roy to sidekick/student, Dinah to girlfriend/garden. This is O.G. Dinah; Golden Age Dinah, the florist, which made her the main household breadwinner. You see, flowers (and flower arrangements) in the Sims are extremely profitable; they are practically money trees. I mean, they aren't literally money trees, because there ARE literal money trees in the Sims. But one doesn't use those because those are considered tacky and unrealistic.

Meanwhile Ollie was supposed to rise up the corporate tree as a rich business person; you know, Ollie of Queen Consolidated Whatever.  Instead of Ollie the Tech Entrepreneur. Or Ollie the public relations expert. Or Ollie the anthropologist of native american cultures. Or anti-establishment Ollie. Or... face it, there are a lot of Ollies to choose from.

A Downloaded Diggle and one-out-of-30 Felicities also lived in "Star City', which was my rebrand of the Sims Evergreen Harbor, the center of the game's eco-living gameplay.  It gave Ollie a port city he could literally help clean up! It was perfect. What could possibly go wrong?  But this is Ollie we're talking about...

The job didn't work out almost immediately.   Ollie got a chance card about whether he should confront unethical practices among the higher ups at his workplace, which, being Ollie, I could not let him ignore. It would be like Clark kicking a puppy. So the fat-cats fired Ollie, who I then entered into politics, because, hey, that's a thing he does.  Rene wasn't doing anything other cook, so he joined the career, too, just like on the TV show, to keep Ollie company at work!

That's when things really started to fall apart.  Dinah found about, um, That Thing between Ollie and Roy that was happening when I wasn't looking.

Apparently EVERYONE finds Ollie irresistible and he's too polite to say no.

Their relationship was always pretty forced (they had nothing in common, other than a love of the treadmill); he was a loner by nature and she was strongly independent, so she broke up with him but stayed in the house. Awkward.  That's when she changed her hair from natural black to bottle blonde and got that sweet custom motorcycle I had to search the entire internet for.

So I quickly fixed her up with the FIRST townie who came along to keep her engaged so she didn't wander off and, I dunno, shack up with Alfred or something.  That turned out to be Eco-master Knox Greenburg (the skinny goofy NPC who bores everyone talking about recycling and water collectors and grub farming).

They both like nature and plants and (unlike Oliver) Knox, being an NPC, had no outside interests (other than grubs). She'd seemed happier than I'd ever seen her (off the treadmill). Plus, Dinah was also great for Knox, making him get a decent job (civil designer, green technology expert) and sending him to the gym (and the barber), which turned out way way way way way way better than you'd imagine.

Apparently he's also dynamite in the sack because they kept each other VERY busy.  SO busy, that one time when starting the game after a re-fresh, I forgot to throw a necessary default switch, and, well, Dinah was suddenly eating for two. A shotgun wedding was held pronto, because no way would I let a superhero have an illegitimate child!

Except for Barry, of course. More on that later.

Well, that wedding was a utter disaster in 100 ways that I'm still in therapy for, but all you need to know is that the deadline on the event ALMOST ran out without Knox and Dinah (who was very visibly pregnant in her white wedding dress) getting married because when I needed her at the altar she was RUNNING on the treadmill.  Sometimes a Sim will get obsessed with a particular activity for no discernible reason; she's an active type, and no matter what happened, the second I wasn't watching her, she'd head for the treadmill.

Meanwhile, Ollie and Rene were spending all their time campaigning together and Rene's whole function in the game was supporting Ollie, who was lonely and irresistible and... well.  So now Ollie and Rene are sharing a bedroom (and then some), Knox and Dinah have one baby (Stamen) with another in the oven), and Roy is hanging out at the hookah bar. Oh, and Ollie's campaign is a shambles because, well, Ollie's just not very NICE.  He simply lacks the patience for campaigning.

But Rene's popularity is soaring; he's getting votes, rallying crowds, passing ordinances; the town is transforming overnight into a high-tech eco-mecca thanks to him (and Knox); he surpasses Ollie easily as a natural celebrity and is obviously headed for city hall and maybe the White House.

So I let Oliver quit and become an Internet Personality, figuring maybe being a cantankerous jerk can be profitable that way.  That, naturally, didn't work out, because he didn't have the patience for all the upkeep of posting and editing (and he kept doing dumb stuff that lost followers), so he quit and did nothing around the house, while Rene did everything for him, the household, and the city. The Greenburgs moved out to open up a flower shop, but as the kids grew, Dinah clearly resented being stuck as a mother and the arguing with Knox got worse and worse... and after What Barry Did there was no turning back.

She divorced Knox, leaving him alone to run the flower shop and raise three boys (if you count the clone).  Or a least it would have been alone if a disenchanted Rene hadn't autonomously stopped by to visit his old, lonely housemate Knox one rainy evening, and... well.

Two of the boys are in college, one's a professional ballplayer, Knox's brother runs the flower shop, Rene married Knox, got a star on the Walk of Fame and they retired having made so much money that they very easily live on investment income (as do all the children, who don't really have to work, and Knox's mothers and sisters).

Meanwhile, Roy's still in school because I didn't have the heart to age him up for fear he'd abandon Ollie, who's renting out rooms at the factory-house and still doing the only thing he really seems to enjoy.

But I still have hope. Through it all, Oliver seems unfazed, and his latest career should be perfect for a man like him: secret agent! He's fit, he's self-assured, he's into *ahem* casual romance, he's a loner. What could possibly go wrong?

This is why I've (until recently) found it hard to criticize the CW shows: They managed to make Green Arrow seem like a reasonable superhero character, instead of the goofy sad sack that he's destined to be. And they did it without (as the game figured out) marginalizing him to focus on more interesting characters...

For the all the CWness of "Arrow", I really applaud Amell's performance of Ollie as a person who worked hard to learn to be a calm, reasonable person. As a general rule, his character is a source of emotional support for others, as opposed to the CW Flash who is constant need of emotional support from others.

Definitely. It's far too rare to see a male lead to mature to the point where they can apologize for mistreating someone and explain what they're working on to improve. I don't dislike Gustin's Barry, but he definitely does need to finally grow up, at least enough to not keep secrets from the team immediately after promising not to do that, for the fiftieth time. Though really, I guess STAR Labs is basically one giant dysfunctional support group for the emotionally stunted. And I swear, if one more character refers to Barry "leveling up" like he's playing D&D...