The Carnival of Doom, Part 2: The J'onzz Corollary

So, the bad guy has engineered a crack in the track of the mechanical horse that John Jones and Willy are riding on at Wonderland, and we listed a few of the, oh, 17 or so reasonable ways J'onn could use his powers to fix the situation so that it no longer threatens (assuming that it really IS that big of a threat).

Of course, J'onn uses none of those, because he never does anything obvious or sensible, or even comprehensible.  Instead, he adheres to the Martian Prime Directive:

So, with a child's life at stake, J'onn decides to... do nothing. Not even spin.

This is not at all the only way to find out, but it is the way that J'onn chooses so that he and Willy can be put in danger again as soon as possible, because, well, his stories are really short. The bad guys oblige.

Dick Dastardly goes to set another trap for John and Willy.

It's been a while so you may not remember that planes in Apex City invariably FALL. And amusement park planes are no different.

Again, JJ/MM has to figure out some way to fix the situation without Revealing His Secret Identity. Really, he does this kind of thing every day, you think he'd be better at it.  Obviously the situation calls for Martian breath, because everything you don't solve with spinning you solve with Marshalation.

So, John falls out of the falling plane and manages to land FASTER than the plane does, rolls away somewhere to change form/become invisible with still enough time to use his sup--Martian breath to guide the plane to safety.  Those planes must have an impressive glide path for park rides.

Meanwhile, the crooks are adhering to their strict time table and have robbed the box office, even though John's not dead yet. 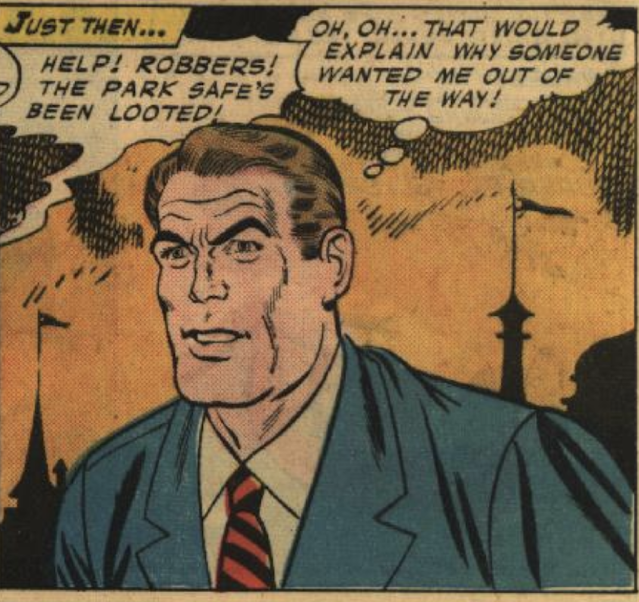 Now that the source of the danger is evident, it's clearly incumbent upon John to ditch Willy, which, clearly, he doesn't because Martians do not think the way we do and besides, you know he's seen all six original "Lone Wolf and Cub" films and has sidekick envy.

To his credit, John THINKS about leaving Willy behind. But Willy is already in the boat and-- somehow-- John is powerless to change this. In the same way that once the mechanical horse track was damaged, John couldn't STOP the ride, he had to go through with it. John can never change or avoid his circumstances; he has to overcome them somehow. My theory is that Speed Saunders and the Martian Manhunter are sort of conceptual opposites and this is one of the reasons I was inspired to visit Apex City again.

Speed Saunders is, superficially, a perfectly ordinary man with no special power or ability.  But he doesn't need them because he has meta-textual authority.  Speed unknowingly controls the reality of his narrative: his hunches will come through, bullets will not hit him if he does not wish it, people will confess if he wants them to, evidence will be deposited on his dinner table, and answers will appear in the closest book if he needs them to.  The world arranges itself AROUND Speed Saunders.

The Martian Manhunter is perfectly extraordinary, with every special power and ability.  But he needs them all because the narrative will always conspire against him.  Meteors fall right next to him, everything around him bursts into flame, his secret identity is under constant threat of exposure, and the writers force him to use his powers in the least simple way possible.  The world arranges itself AGAINST J'onn J'onzz.

I think if I wrote Martian Manhunter, I would have Speed Saunders do occasional walk-ons as a visiting detective who unintentionally makes John look like a fool every time he shows up and solves a case while John gets himself trapped in a broom closet.

Anyway, John is now STUCK with Willy as he tries to follow the crooks into the Tunnel of Thrills, so tomorrow we'll see how that goes.

Hint: it will NOT be thrilling.

"Now that the source of the danger is evident, it's clearly incumbent upon John to ditch Willy, which, clearly, he doesn't because Martians do not think the way we do and besides, you know he's seen all six original "Lone Wolf and Cub" films and has sidekick envy."

So he wants a Zook of his own, I guess.

My theory is that, in addition to his consistent powers of super-strength, flight, et cetera, J'onn has the power to give himself any OTHER power that he can imagine but he can only use each such power ONCE and never again -- not entirely unlike how (in at least some incarnations) the H.E.R.O. Dial doesn't allow its user to become the same super-hero twice -- and that's why he keeps needing to think up different ways to accomplish the same feats over and over, because what worked last month won't work this month. :-)

To be fair to the timeline, Willy seems like the sort of little snot that has ten of the same outfit and still tries to sleep in his clothes.

But really, I think the main attraction of this section is "EEK! That poor man...he'll be killed!" as Detective Jones falls out of the plane that's already ready to kill him.

My own take on J'Onn is that he's just bored. His world is (probably) dead. We're like ants to him. He says that he was a cop on Mars, but it's not like we can check his references, since--as mentioned--they're all dead and their Mars-Phones have been disconnected. So, while he could just stomp on the ground and bounce the crooks off the Tunnel of Thrills sign and into his and Willy's waiting arms, he'd rather see how this plays out and find some bizarre use of his powers that can become his big signature move...

I was about to suggest that J'onn and Speed form a buddy detective duo, but I think that might irreparably tear the fabric of reality. Like if Starsky and Hutch both observed an elementary quantum phenomenon and one saw a cat and the other saw seashells. I think that would be bad. Or something. I'm not Werner Heisenberg.

"EEK! That poor man...he'll be killed!"
Yeah; I wondered about that.

Starsky and Hutch both observed an elementary quantum phenomenon and one saw a cat and the other saw seashells.

I think I remember that episode.

"Willy is wearing the same outfit he was wearing when introduced"

Maybe he just has several identical outfits. No sense in unnecessarily confusing the kid right from the start of the day...