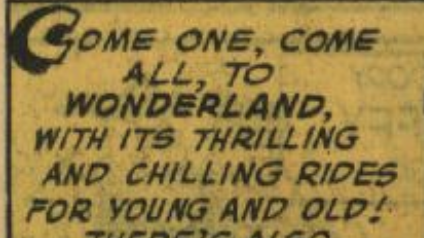 A comic book amusement park? Where?

We can't be in Star City, because we know what the name of their amusement park is.  Are we in Gotham City? Wonderland would certainly be an appropriate venue for the Batman villain The Mad Hatter!

But no. You see, I am temporarily overwhelmed with trying to keep up with the godlike Speed Saunders, who, with his reality-bending powers, meta-textual reading habits, and transquartomuralistic lectures, is like the love-child of Grant Morrison and Dr. Manhattan. So I decided to spend some time with a much less powerful, more down to earth character, with more comprehensible abilities and reasoning.

So here we are in his town, APEX CITY, about to attend:

And a lower-stakes, less exciting adventure you will never have!

It begins in the office of hardy Captain Harding, the weighty head of the Apex City Police Department, where he and Detective John Jones (the human guise of J'onn J'onzz, the Martian Manhunter) are... being held up!

No, it's not Prof. Arnold Hugo; it's just Captain Harding's scamp of a nephew, Willy.

Sometimes I am little torn as to whether early MM stories are more Golden Age than Silver Age, but incidents like this cinch it. MM is clear Silver Age because if this were the Golden Age, the cops would have answered Willy with a hail of bullets and then, though exonerated for their natural (over-)reaction, they'd be burdened with guilt for killing Willy, until the end of the story after they'd tracked down the sidewalk swindlers that were selling kids realistic-looking toy guns, who were REALLY to blame.

J'onn, being a suck up, volunteers to take Captain Harding's Willy in hand to the amazing local amusement park that's never been mentioned before and never will  be again.  Besides, as we've repeatedly established, he never has anything else to do, and like the rest of Apex's citizens, spends most of his time wandering the streets.

Check your watches; the story says John just got off duty, yet he's volunteering to take Willy to Wonderland for the day, which means... it's the morning and John had the night shift?  Or maybe he means the next day.  Congratulations, you have already put more thought into this story than the author.

Once at Wonderland, they look at the peachy rides.

Heed my retroslang warning. If you time-travel for any reason to the Golden or Silver Age and use "peachy" incorrectly, the cops will answer you will a hail of bullets, knowing you are an imposter. And they will NOT be guilt-burdened by it.

Those peachy rides include:

The Salt Shaker of the Future

The rides are nice, I'm sure, but probably superfluous since, as we know, the main thing that Apexians enjoy is simply FLOCKING, and the fairgrounds give them plenty of room to do that. But they do like to gawk, so I guess the rides give them something to gawk at.

But, despite the enormity of the area and the apparent distance between the two word balloons, it seems that...

evildoers are within earshot!

You have to respect comic book crooks; they are COMMITTED. Once they make a plan, buddy, they do not put it off.

Delay our heist by a day? Or even just a few hours? Don't be absurd; we'll just kill a cop and a kid; it'll be a great distraction! Besides, do know what a headache it will be to change this in our group planner?  Do you how hard I worked on those Gantt charts, Larry?! This is why I'm the one with the PMP, Larry.

Besides, these guys have "special clothes and tools".  ORLY?!  First of all, you're robbing an amusement park office, not an underwater bank vault. Second... you're in Apex City.  The bar for "special clothes and tools" is pretty high.  Do you have a crime suit that shoots flame and electricity out its nipples? Do you have a giant robot bear? Do you have a thematically-shaped helicopter, headgear, or a special ray-gun?  If not, you may want to think about relocating somewhere more appropriate, like Star City.

Let's see what their first plan is.

Oh, okay; they're going to kill the Martian Manhunter with a mechanical horse.  Is it a giant one designed by Prof. Ulixes and filled with Greek soldiers? Does it breathe Greek fire?

Good luck with that, Dick Dastardly; I doubt that would even kill WILLY.  How fast do such things go?  What is this, Final Destination 3?

Naturally, J'onn even SEES the trap in advance. Wouldn't want him to have to strain himself.  Besides he needs time to come up with some ludicrous solution to his problem. 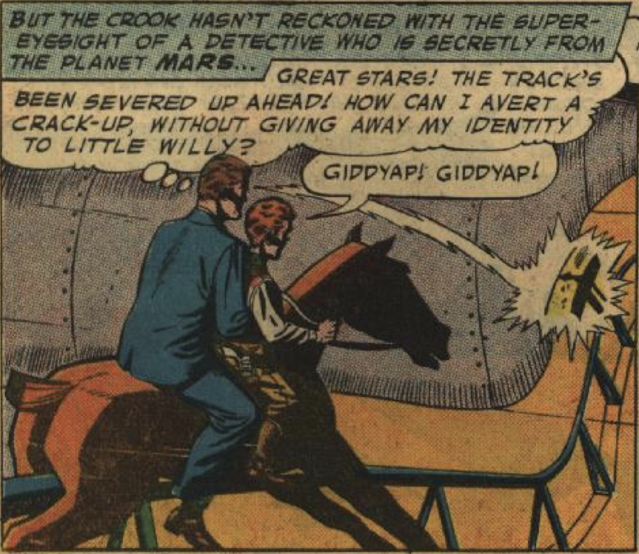 "How can I, with my panoply of superpowers, avert a crack-up, without giving away my identity to little Willy?"

Let's see, J'onn, it's hard to remember what powers you are supposed to have at any point but if NOTHING ELSE... you could FALL off the horse with Willy, taking the brunt of the fall yourself. You can do that without even being Martian.

I know you can't fly. Can your Martian vision melt the rails together yet? Maybe you can't do that yet.  With a bit a Martian breath (which you can direct with unerring accuracy) you could probably just lift the horse past the crack.  Or you use your legs (or Martian breath) to slow down the horse as it approaches, passing it off as a failure of the ride. 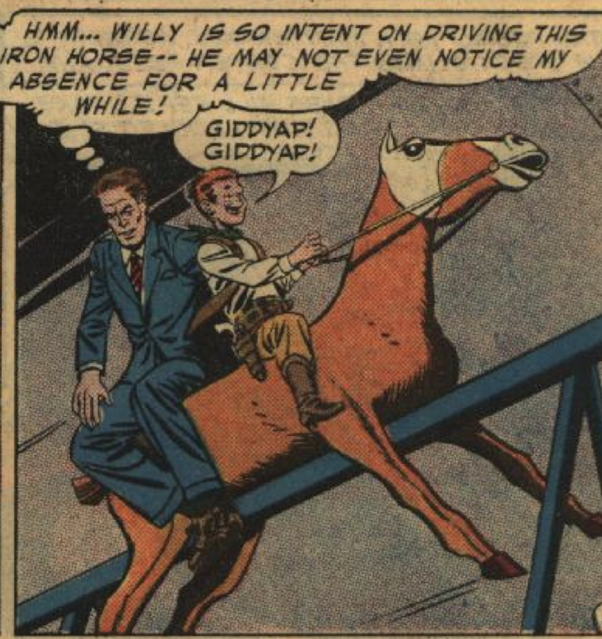 In fact, now that I think of it, there is only one way, one power that could be of absolutely no use to you whatsoever in addressing this situation....

No. No, he wouldn't do that. Doing that would get salt all over the roulette wheel!

Also, I like the sarcasm-quotes that pseudo-French puts around the word "uniform," implying that they're not going to just literally put on the maintenance uniforms that Flannel wears with his fake mustache. Or did the artist just draw random people and figure that the dialogue was so bad that it didn't matter who was who?

Seriously, though, what the heck kind of ride is that? It's exceedingly dangerous in its lack of safety equipment, while being no more interesting than a fake horse on a track. Willy's an idiot...and possibly just a talking doll.

As soon as I saw Willy I was terrified, because I know the face of Popsicle Pete when I see it. You'll find a typical Popsicle Pete adventure in the middle of this:

I could easily be the only one who didn't already know this, but just in case:

Is the horse wearing a cowl? Is that Bat-Mech-Horse?

Race-horses wore (wear?) race cowls sometimes. The had a decorative purpose, matching the jockey's outfit and a functional one, sometimes containing blinders.