Starzl, or, The Importance of Looking Things Up

There was a time before the internet. In fact, that time is almost all of time.  And things were very different then...


Information was a rare commodity, and access to it was a privilege with a price.  Lots of it wasn't available at all, and what was trapped on a piece of paper or film, in books or the like, stored away on shelf or in a box in a building. Information was PHYSICAL.  And finding it was akin to archaeology.

This is the world in which Golden Age comic book writers lived.  To write their stories, they became information hoarders.  They consumed books and newspapers voraciously, writing down little facts on index cards that they could work into a story at some point.

And it shows. If you read stories from those eras, you'll notice that one of the big differences is how didactic they are. Batman is always stopping to explain science or criminology to you.

It's not coincidence that one of characteristics of the Heroclix figure for "Super Friends" Batman is:

Silver Age writers did the same thing but they didn't content themselves with actual science.  They were mostly sci-fi geeks, so they didn't hesitate to make up science for their stories if they thought actual science was too boring.

So when I was doing research -- on line, of course, god forbid I should ever go to a Building and touch a Book -- on Atom foes, I wasn't surprised to find an early Justice League story where the authors had dreamt up a subatomic world to challenge the Leaguers.

The DCU is, as you know, lousy with subatomic worlds.

This one, like so many DCU alien places, has yer typical obvious fake name; you know, just put an X, Y, or Z in it and it sounds "alien".

This particular subatomic world is named "Starzl"; again, a laughably fake bit of alien sounding gibberish the authors obviously slurred out of their gin-laden mouths at lunch time.

In the process of looking up more about the antagonists in Starzl (Terrane, Ocana, and Etheran, by name) something else turned up in my search: 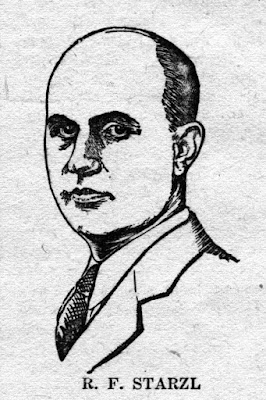 Roman Frederick Starzl, a science fiction writer.  Writer, in fact, of "Out of the Sub-Universe" in Amazing Stories Quarterly (Summer 1928).

I'm an uncultured clod and had never heard of Starzl.

Silver Age writers, on the other hand, were well-read and when the time came to name a sub-atomic world they just naturally named it after one of the pioneers of sub-atomic lit, R.F. Starzl.  They didn't expect their 10 year old readers to know his name; they didn't care.  This wasn't an "Easter Egg"; easter eggs are inserted with the explicit expectation that someone will notice (and then share that information with everyone interested, thanks to the internet).

These writers didn't use "Starzl" because they thought someone would notice; they did it because it mattered to them.  In the same way that modern comic book writers will name a street or a building after a former creator relevant to the main character, past writers would name things after the creators who inspired them, sci-fi and pulp writers like Roman Starzl.

And now because they did, I know a little bit more than I did before. Who knows I might even read Starzl's "Out of the Sub-World".  If it's online, I mean; god forbid I should touch a physical book.

As for you; be smarter than I.

Don't assume that everything you see or read comes out of nothing or has no meaning or no connections to something else.  Search for context, no matter what information or entertainment you are consuming, and you'll find it a much richer experience.

As a name, "Roman Starzl" definitely has huge advantages over prior similar subatomic universe writers such as Ray "The Girl in the Golden Atom" Cummings (1922) and Fitz-James "The Diamond Lens" O'Brien (1858) (both recommended; I haven't had the pleasure of reading "Out of the Sub-Universe") in sounding like James Joyce made him up.

I still see it as being of a piece with Easter eggs, more of a "shout out" except in very narrow cases when the name would be a reasonable real-world choice. For example, if DC were to refer to the original Earth-2 as "Wheeler-Nicholson's Universe," I can imagine naming the place after Major Malcolm Wheeler-Nicholson, since the man who launched More Fun Comics, Adventure Comics, and Detective Comics, and (allegedly accidentally) compiled the contents of Action Comics #1 could be treated as the universe's discoverer and it being named for him. The Starzl reference is probably just on the edge for me in terms of legitimacy, since it's a name relevant to the field, but not to the specific subatomic world. But any further afield, and it would look too much like Gardner Fox doing the ordinary fanboy thing. I find British writers at the time to be very quick to pull the trigger on name-dropping a fellow author in conversation, and H. Beam Piper (though often brilliant) would often insert entire commercials for books he read into a story.

But getting back to the Flash's version of science, what makes those stories especially jarring is how the writer (often also Gardner Fox) would lurch from trying to justify alchemy-guns or whatnot to imploring kids to learn optics by building a periscope out of household junk in a PSA.

"Well, of course, I'll send my daughter and her fiance; whom else could I trust?"

Yes, the mad scientist and his daughter and her boyfriend. The typical trio of SFdom, often seen in both prose and comic books. Although it's usually the boyfriend (invariably a two-fisted adventure-type) who's the star of the feature.