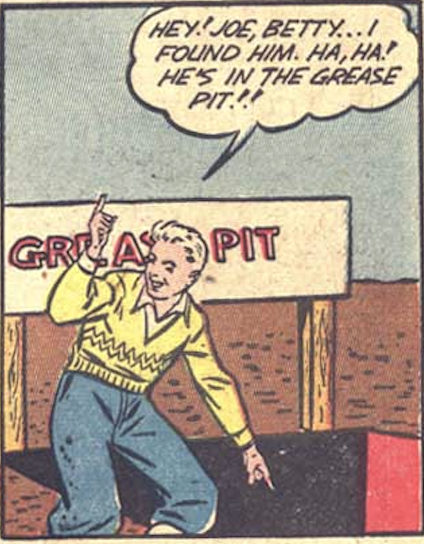 I laugh, but remember: despite its foibles THIS is the story which, with the arrival of his sidekick and archenemy, made inevitable the Shield's rise as American's favorite superhero.
Posted by Scipio at 12:53 PM

Email ThisBlogThis!Share to TwitterShare to FacebookShare to Pinterest
Labels: Dusty, The Shield

Maybe amusingly, MLJ also had a Firefly. Harley Hudson allegedly didn't have powers, but it was a New Age-y kind of "no powers," where he could focus his energies into ripping trees out of the ground and not needing to breathe. And he could get around the city in his Fireflier.

Also, Dusty's weirdest appearance is in the much-later Mighty Crusaders book. The MLJ heroes are drawn into the then-present 1960s, except for the Shield. So, the new Shield (allegedly Joe's son) and Dusty just sort of...stare forlornly into each other's eyes from across the room wondering what secret the other is holding about Joe's fate. And that guy has his own insane can of worms...

"Fireflier"; that made my day.