We've focused so much on J'onn in this story. But what of the great menace himself. Mr. Moth?  And where does one hide a giant radioactive clock?

Why, in an isolated lighthouse, of course. [Which, by the way, is more proof, if more proof were needed, that Apex City is on the ocean (as most cities in Florida are).]

Wow; there's a lot going on here.  First is the fact that Mr. Moth probably doesn't seem as menacing to you in person as he does when the Mothcopter is looming overheard.  Why, he may even seem a tad risible to some jaded souls!

But that's because, as a comic book reader, you're endured to object-headed villains.  I assure you, if you saw a white-gloved man in a purple suit wearing a moth-shaped helmet covering his entire face coming toward you in person, you would know with 100% certainty that you were about to die like an innocent suburbanite in a home invasion flick and would feel menaced accordingly.  Particularly if, as he advanced, he intoned, "Another light-giving prize to add to my collection of rarities!"

Second is that his hideout is in a commandeered lighthouse.  That may seem way too obvious, in the manner of a Batman '66 villain, as in "Catwoman's at the abandoned Gato & Chat warehouse".  But remember: this is Apex, America's Most Flammable City. 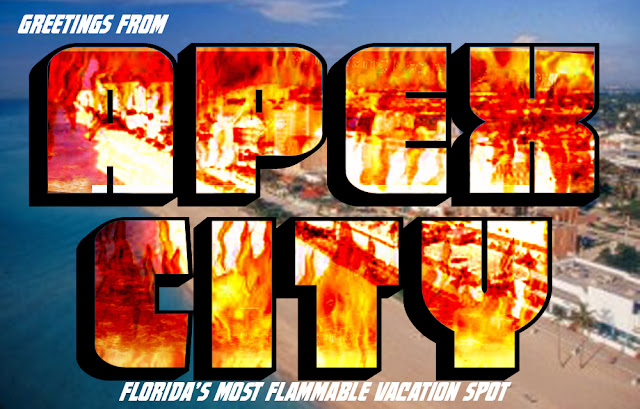 Most businesses in Apex are about things that BURN.  Here, to demonstrate, is a page from the Apex City Telephone Directory of the day:

Given that...there are a LOT of places that someone like Mr. Moth might be hiding out. Places he can stash his precious, stolen collection of light-giving rarities like...

DAMAGED DISCOUNTS FROM PIER ONE 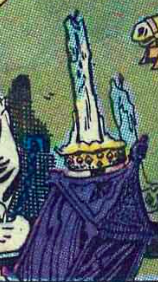 Mr Moth (much like his more successful Gotham counterpart, Killer Moth) is clearly a villain who makes money for the purpose of committing crimes, rather than one who commits crime for the purpose of making money.  Men like Mr. Moth have money, means, and mania.

All of which he employs the next day, as Det. John Jones and the notoriously idle gawkers of Apex City flock to a new statue unveiling (which probably should have been held at NIGHT):

I think the City of Apex's Department of Parks & Public Monuments needs its own back-up series, so we could see the process by which civic leaders decide that what their city REALLY needs is a statue of Atlas, painted in phosphorus...
Posted by Scipio at 8:49 AM

We need a series of Apex City travel posters.

'Cause this place is HAPPENING!

Think about that phrase for a minute...

I'm disappointed that Mr. Moth isn't stealing a mundane statue in order to bedazzle it. But it's nice that the fellow in the purple fedora (from previous scenes, no less; who says Silver Age books have no continuity?) is pitching in to give the narrator a break. In Metropolis or Gotham, someone would need to make room for an additional caption while the narrator puts off his smoke and porta-potty-unveiling break, but not in Apex!

I'm kind of amused that the statue is human-sized, though, I guess to go with their tiny "skyscrapers." And I wonder if they sculpted it special to trap Mr. Moth or if they already had a statue of Atlas on hand to be unveiled and then sprayed it down with phosphorus. I'm guessing the latter, since that's a substantially bigger crowd than came out to the watch company unveiling, suggesting some pre-planning. Plus, it's pretty obviously a trap. Detective Jones is wearing the city's striped tie, so something's obviously up.

I beg to differ on the surrealism, though. With the word balloons, it's just as bizarre. I guess that's less painting-like, though. Surrealist film, maybe, then. Seriously, how is Mr. Green Jeans being held prisoner, exactly? Does he have to win a game of Minesweeper on some enormous computer before he can leave?

That is one pissed-off-looking carousel horse, though, pretty or not. Did the carnival owners set it on fire? Is that it's relationship with light-giving prizes? Because they should have set it on fire.

First of all, Mr. Moth's mask is mothalicious.

No inhabitant of Apex City needs to pay for oily rags. My understanding is that most businesses in Apex keep a stock on hand as free giveaways for customers.

The guy in 'The Son of Man' by Magritte could be an interesting Silver Age comics character. Let's call him Private Investigator Appleface.

Cameron: I'm pretty sure he fought the Doom Patrol.

Isn't that the guy who attacks cellphone and tablet manufacturers when their products are too black or bear too much resemblance to black rectangles with rounded corners? I guess when things like that happen in the DCU, the only people who return your calls are that boring version of the Doom Patrol that even the writers agreed didn't exist. Errr...that's the (thanks, Wikipedia!) Arcudi series that turned out in-story not to be happening, not the Byrne series that everybody agreed never happened because it decided that nothing else had happened.

I still think there's some underground vehicle customization shop in the DC Universe, catering to the super-villain elite (and not-so-elite).
"Hey, Rico, the Penguin wrecked another Penguinmobile! Do we have anymore fiberglass beaks in the back?"
"Aw, crap! I used the last one yesterday for Killer Moth's new Mothmobile!"
"Moths don't have beaks, Rico."
"I know that, Sergei! You want to tell Killer Moth, or should I?"

No, no, Scipio. One doesn't unveil one's phosphorus-covered sculpture at NIGHT. The phosphorus requires light to charge up, so it can glow after dark. The Apex city fathers are well-versed in proper phosphorus unveilings.

Also, this allows the Apex citizens to flock about for hours waiting for the sunset, so as to properly enjoy the statue. This is clearly a well-thought-out event. THAT explains the massive crowd.

Bryan, that seems like a perfect pretense to hide a solar-powered laser cannon. Killing people without harming the enviroment!

Your telephone directory is a fake, Scipio! They didn't have 10-digit phone number then!