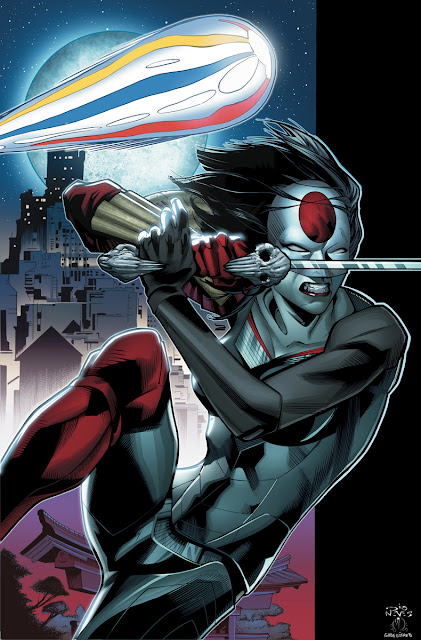 Halo, AKA, The Knock-Off Firestorm.


Sweet baby rays, I may have to pick up this mag.

I'm going to get it. I HAVE to see how they tie together a worldwide cult of assassins, a ninja/samurai/mystic warrior, and a teenager possessed by an alien lava lamp.

To be fair, if Halo is going to continue to be part of the DCU, isn't it best that she's in the book about Katana hacking up cultists dressed like snakes? Especially when "a bunch of different powers, each of which is color-coded, could easily have caused someone to say "she should be behind all the rainbow of Lantern Corps...es."

That's a pretty sad selection of characters, though. Sugar and Spike is a nice change from the superhero-superhero-superhero approach to "something for everyone." But the rest? Were Automan, B'wana Beast, the Heckler, and Super-Chief busy?

They've already shown previously that Halo's powers (and those of Rainbow Raider and the Legion's Rainbow Girl) are tied to the emotional spectrum.

I was hoping for Prince Ra-Man.

Dare I ask what you have against Halo?

If the concept of a New 52 version of Sugar n' Spike isn't a sign of the end of days, I don't know what is.

They've already shown previously that Halo's powers (and those of Rainbow Raider and the Legion's Rainbow Girl) are tied to the emotional spectrum.

They did?? Sheesh, even I didn't suspect that Johns' ego went thatfar. Have they worked in the Rainbow Archer and Mr. Mind's Rainbow Squad yet?

My understanding is that Sugar and Spike will be private detectives. Don't remember where I read that, though.

The question is will they still be small children, though...

SUGAR AND SPIKE? Holy heck do I love that comic! If you haven't checked out the omnibuses, you're cheating yourself.

Well, if the previous New 52 is any indicator, Sugar will likely have a rooftop threeway with Stanley and his Monster, while Spike gets his face carved off. Just a guess.

Dalle - worse - Sugar and Spike will be grown-up paranormal investigators. I wish I was kidding.

Way to ruin a classic idea.

Nathan - it's sad when the truth is worse than my jokes.

Well, Scipio has not yet told me what he has against Halo, but I will continue to patiently wait. ;-)

Cybrid - check out old posts on this blog. Search "Halo". It's all been explained.

I appreciate the tip, Dalle, but upon following your advice, I'd have to say that "explained" is an incredibly subjective term.

So she's a reanimated corpse with amnesia and seven color-coded powers (the homonym stuff just seems kinda pedantic). What's to hate about that?

She's a sociopathic teenager created LONG before sociopathic teenagers became cool, a Fugate without a Starkweather, resurrected by an ancient energy being whose innate oneness with the visible color spectrum bathed her darkened soul with invigorating and purifying light. She died for her own sins and was reborn into innocence via power stemming from the Dawn of Time itself. Is that better?

But whatever. To each their own.

I swear I posted something... did the universe get rebooted yesterday?

Anyway, its nice seeing Metal Men and Firestorm getting miniseries. No Elongated Man is decline, through.

Katana was ok in Arrow - they should really put her in Oliver's quiver along the rest of Team Arrow in the comics. All she lacked was her husband's soul inside a sword.

cybrid, Scipio gave his opinion of Halo; I don't think he ever purported it to be anything other than that.

Personally, I have no strong feelings about Halo one way or the other. She was never a favorite of mine, but I don't despise her either. To each their own opinions, I say.

Haven't given these characters much thought since the original "Batman and the Outsiders"/"Outsiders" run.

Katana was interesting for two reasons: 1) great costume for that time; 2) she had a Wolverine vibe that DC didn't have much of. I thought she could have been as interesting as Wolverine but it didn't develop that way in the 80s. Since I haven't remotely liked any of her later costumes, I have not read much at all about her and don't care about her in any way. But I give DC credit for trying to push an original minority character instead of just giving us a female/Asian version of a pre-existing white male character.

Halo's innocence made her interesting back in the day. But as with Katana, I find no modern appeal for her. Again, Kudos for pushing an original female concept instead of bastardizing a old white male concept.

Firestorm, Metal Men, and Metamorpho all have potential. Their abilities alone should be enough to carry a "B-level" DC book (meaning it might have two or three 2-3 year runs over a decade's time).

Metal Men is limited by its goofiness. They're just walking, talking cartoons really. Good for a non-serious title. Metamorpho has been hamstrung by two problems: 1) His horribly outdated name; and 2) his very off-putting physical appearance. The guy's just downright ugly. He'll never be commercial enough to sustain a series with those two problems.

Firestorm has been sorely abused by DC. His convoluted history is reaching "Hawkman" proportions. Nothing seems to stick and so DC keeps monkeying with it. I say go back to its original core and move forward. FS is just too powerful and interesting a hero to not keep a series. I think the key is if you keep him young (say 18-ish) then you can keep his worldview and his interests/problems narrow--as most young people do. Let his ignorance of the world be his biggest barrier. He could solve a lot of the world's problems if he could grasp how the world worked--so don't let his mental world get that big. This will help avoid the power/concept 'creep' that afflicts high powered heroes.

"I say go back to its original core and move forward."

I've always felt Firestorm should be the ultimate "buddy cop" story, where two people with wildly different backgrounds and priorities have to learn to work together to get things done. There's a ton of potential there, with the Stein and Ronnie dynamic, but as you point out, DC keeps shoehorning others into there and homogenizing the concept (sorry, two teens are not different enough, even if one is a nerd and the other is a jock). And the man/woman thing is completely played out.

On Halo, I won't speak for Scipio, but my problem with her is that her role was the gritty version of untrustworthy comic relief, Woozy Winks in a cheerleader's body. And I resent the Outsiders as a franchise for taking the "slot" previously held by The Brave and the Bold, where the preview illustrated the laughs to come by having Halo not know what "legs" were and needing Batman to explain her powers to her. And then her eventual background looked like it was Xeroxed from random Marvel characters at the last minute.

And yeah, I'm kind of surprised that they already tied her to the Green Lantern mythos, but at least they didn't make her some shadowy uber-Guardian...not yet, anyway...

For Firestorm, dead on, Bryan! The rookie is the only one who can "drive" and doesn't know how anything works, but wants to play, while the veteran who was "just one day away from retirement" knows what needs to be done but nobody's listening to him. People (including writers) mistook it for "DC's Spider-Man," though, and introducing Captain Atom to the DCU just muddied the waters further as writers realized how similar their origins and abilities are, or were, since the elemental storyline (starting with Pozhar) completely derailed the franchise for so long in trying to create a new character without the internal conflict that was about the adventures.

Sugar and Spike...as grown characters who do super-hero-y things. Great job, DC. Way to diversify the line to include exactly the same things all the other books have while removing all of Mayer's charm.

As to the B'wana Beast/Freedom Beast dispute, I'll point out that Freedom Beast has only appeared a handful of times since he was created and rarely given a speaking role, whereas the white dude has been on TV. Plus, DC reboots too often roll back to the Silver Age versions...

I have to agree here that Firestorm works best with Ronnie and Stein. Ronnie/Jason Jock/Nerd divide wans't different enough. They're two sides of the same coin.

In a sense, Firestorm was DC's Reverse Spider-Man: The heroes are a good-natured "jock" (who's no eistein but is actually brighter than he seems) and a jewish nuclear physician getting on the years - two totally different persons from two different worlds. They fuse together to fight crime, with the younger sportsman handling the body while the old scientist handles the mind. Because this is DC, the inner struggle is not "Should I do?" but "what should WE do?" Its a team book inside a "solo title".