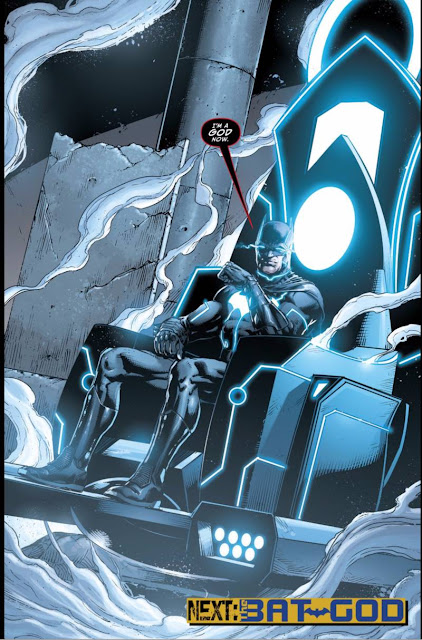 That's exactly how I feel during my morning poop, too, Bruce! Behold the awesome might of fiber.

Look, someone had to say it. And it was better than wondering about the Commissioner RoboBunnikins storyline and/or if this "Bat-God" hasn't been promised a few times already and preempted by crossover events going awry. Oh, well. If it's that important to them, turning Batman into Spock on a fancy toilet while his buddy tools around the city dressed like the Tick instead of doing his job is good enough for me.

Wait, sitting on the Mobius' Chair makes you into a god? What stops someone else from decking Metron and taking his sweet chair all the time?
Dubillex used it once (even through he wans't supposed to lol - he's just that awesome) and all it did was making him know a lot of stuff, and upping his psionic powers enough to fight Brainiac.

Also poor Metron keeps getting no respect. I think there might be a price of somesort. One does not just deck a god and steal his stuff.

So even Metron wishes he were Batman, and sometimes dresses up as him.

Hey John, do you ... think of Batman pooping snakes?

"This'll be one helluva a Heroclix..."

The article "a" is included in "helluva." The extra one is redundant. Redundant, I say. It is unnecessarily repeated. It is repeated one time too many.

That would be a fairly happy thought, Anonymous. Except for the guanoed snakes. Probably not so happy for them.

I do have to say, though, impractical as it may be, I do like the Bat-God design, even if it does go out of its way to highlight those damned Jim Lee collars.

Blue Lantern Batman is here to give fans hope for the NewerNew52.

DC made Batman a god a long time ago.

It's why I lost interest in the character.