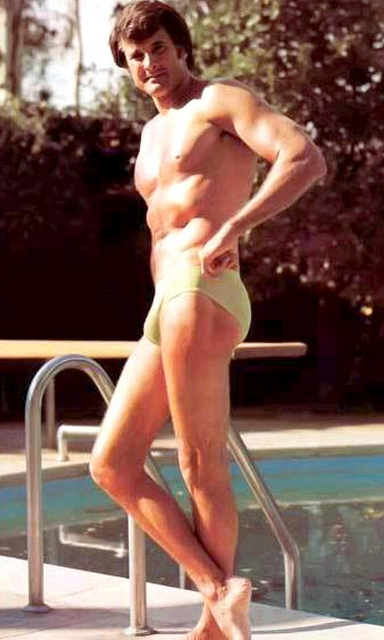 Lyle Waggoner tried out for Batman? I did NOT know this!

I also cannot conceive of anyone other than Adam West playing that role. Or Lyle playing Steve on Wonder Woman. I grew UP on that television!

I think Lyle suffers by sharing the screen with Peter. As an actor, Deyell is pretty ... well, bad. Lyle's low-key delivery plus Mr. Wooden isn't a good combination. West and Ward seem much more intense and energetic by comparison -- it's easy to see why they won the roles. And on a more superficial note, West and Ward have deeper voices. Deyell's chirping sounds annoying compared to them.

Wow, that Lyle Waggoner sure is full of plum-smuggly goodness, isn't he?

Straight men (har har) can make for the best comedians; John Lithgow had no comedy experience before "Third Rock from the Sun", but all he had to do was take himself absurdly seriously and it worked.

"Yeah, whose baby are you, Batgirl?" It's a legitimate question: if she'd inherited a fortune from her parents that would be one thing, but being the daughter of a civil servant is quite another. The fact that she can afford her Batgirl lifestyle on a librarian's salary was an early clue that she's crazy smart, like to an Oracle degree.

... and in the post-Crisis world, Babs was no longer Commissioner Gordon's daughter, and it's unclear whose daughter she is in the nu52. So yeah, whose baby are you, Batgirl?