Rocky's already killed two of his former gang members using stones inscribed with mysterious messages of revenge.  Will his stone-paved path of slaughter grind forth unhalted?  Surely not! This is the point we wait for in these stories, when Batman, fired by moral outrage at such insidious assassinations,  starts detectifying and vows that he will not rest until this madman is stopped!

Unless, of course, he has something more fun to do. 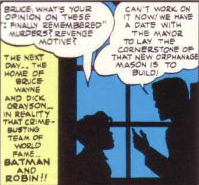 Fight crime?!  Don't be absurd, boy, I don't even have time to turn on the lights!


Yeah, because, god knows, it's not like the mayor could possibly open an orphanage without Batman's help.

It's ugly, but it's a truth.  In the later Golden Age and the Silver Age, Batman is all about opening supermarkets and kissing babies. It's only when people start getting murdered right in front of him, or crap gets stolen from museums he's a trustee of, or his own social schedule is interrupted that he rolls his eyes and deigns to actually fight crime. 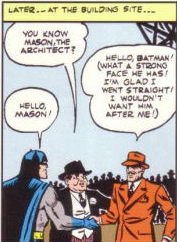 "What a strong face he has?" Huh. Doesn't sound like Mason went very straight to me.  Are you SURE you wouldn't want him after you, Mason? 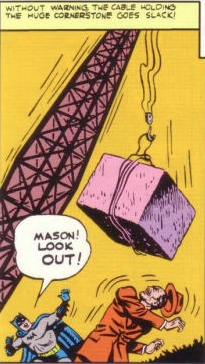 Believe it or not, Batman actually saves this guy. And his hat. 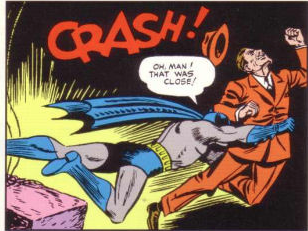 And on those lonely nights, Mason remembers this moment again and again.
"You saved my life, Batman!" the dream goes, "that makes me your SLAVE." 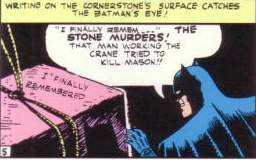 "Damnation.  Everyone's watching.  Now I HAVE to do something about it, don't I? *eyeroll*"
That's why the white slits, by the way: to hide all the eyerolling.


Robin, being a kid, doesn't appreciate the rarefied pleasures of cornerstone laying, so he's overjoyed to have a deranged and desperate murderer to chase. 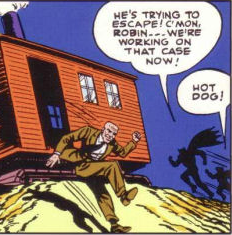 "Hot dog! Can we play catch with a tarantula after this, Batman?"
Robin's a nice kid, but he is NOT right in the head.


Rocky leads them on a merry one-panel chase to the waterfront.  It's my personal theory that Gotham City must be shaped like Ocean City, Maryland, because it seems like no matter where you are in Gotham, the waterfront is only one panel away. 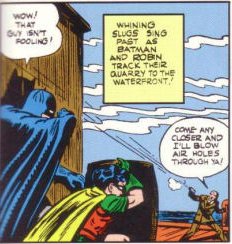 "Ugh.  This one even has a GUN.  Why don't they ever just come along quietly?  I've got a museum board meeting tonight...! *eyeroll*"


Sigh.  Rocky really needs better repartee if he's going to make it as an actual VILLAIN, not just a cracked yegg.  C'mon, Rocky, seize your potential!

Okay, that's more like it.  Rocky's smart enough to abandon the stone-fetish for a minute and lay an actual impromptu trap for the Dispassionate Duo. For a second, I was worried he was going to try to stab them with a stonefish.  Impressively, dude manages to set them on FIRE on the OCEAN.

What with the stones, and the water, and the fire, I was going to make some strained analysis of Rocky Grimes as the essential Empedoclean villain, but it just seemed like so much hot air, really.


So, Batman and Robin burn to death in the middle the ocean, killed by an unspectacular rockpile refugee. Okay, not really. They jump into the ocean and swim beyond the flames while Rocky gets away.  Their 'quarry' escapes; see, I can make rock puns, too.

"And I would have gotten away with it, too, if it weren't for those nosy kids and their dog!"


Rocky is showing glimmers of true villainhood here.  Rather than just sticking his head in the sand and hoping Batman doesn't get to him, he's taken Batman's measure and is formulating a plan accordingly. You can do it, Rocky! Embrace true villainy!

And he'd better hurry, because Batman has already begun to harness his own magical powers of free association with which he'll track down Rocky.  How exactly Batman's realization that all the victims were attacked with stones (because NOTHING escapes Batman's notice) will lead to finding Rocky is completely, utterly unclear.  However, the Boy Wonder, accustomed to playing Penny to Batman's Inspector Gadget, plays along. 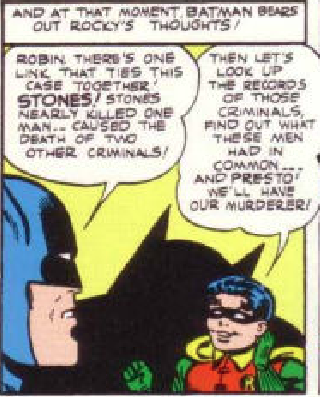 "Um.  Sure, Batman. That's.. really interesting.  Meanwhile, let's look for something substantial the victims actually have in common, not just the murders.  Because unless Cave Carson's gone bonkers, your observation of the obvious is nearly irrelevant."


But meanwhile Rocky has his own plan.  One so ridiculous you will never believe it. But not as ridiculous as how Batman counters it.
Posted by Scipio at 7:55 AM

"That's why the white slits, by the way: to hide all the eyerolling."

Strong face, one smart guy ... criminals certainly do seem to be impressed with Batman.

Personally, I think Robin should be pulling sales slips for orange fedoras. That's the link between all these crimes. Plus then we'd know where to do our Christmas shopping for Scipio.

Bonus points for the Empedocles humor!

In Gotham City? I'm not sure that would really narrow things down much.

I was going to post a +1 on the Empedocles joke, but Steve Mitchell beat me to it. So let me tip my cap to my second-favourite joke: the "cracked yegg".

Wait...how can slugs whine and sing at the same time?

Unless of course it is whiny singing, which I suppose is possible, if Rocky is into Country music.

What were we talking about again?

"I'm not sure that would really narrow things down much."

Something was bugging me about the art. It's so nice! Gosh darn! It's Jack Burnley!

Good for a change of pace. But for my money, it's not a real Peripeteian Epiphany of Evil if it's not drawn by Bob Kane ghosts like Lew Sayre Schwartz or Sheldon Moldoff.

Jack Burnley?! That explains the DRAMA!

Scipio, the Bronze Age Batman once commented on how he used to do things like supermarket openings and the like, before he decided his time could be put to better use. The Brave and the Bold #168, 1980. I don't recommend you read it, though; you wouldn't enjoy it.

"Hips! Delores and her dancing hips, Burnley and his hip artist friends! It's like a symbol I SHALL DESTROY THEM WITH HIPS AS THEY DESTROYED ME!"