Shut Up and DANCE! 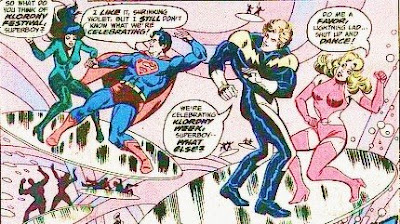 Have a Good Klordny Week!

Whoohoo! Hoopy Klordny, one and all!

I'd say that they're gonna feel that in the morning, but they ARE Teenagers, so maybe not.

And a happy Klorny to you, too.

Superboy and his Amazing Friends: Halston, Gucci and Fiorucci.

And my verification word Implamot is the homeworld of MirrorBall Lad.

Ah, wasn't that the special issue of LSH composed entirely of Colorforms? There isn't a single part of Garth's body that looks like it came from the same sketch as any other part.

Ohhhhh, I remember this scene! It was quite a riot!

I hate to inform you that Klordny Week is in August, not December.