Look what I got from Totaltoyz for Klordny! 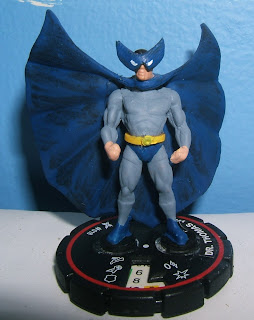 Shoulda worn THAT to the theater, Tom.

As my friend Chris said,

"What's his special power? Getting shot?"

No, wise-acre: healing. He was a doctor, remember? He's on the dial of the old veteran paramedic. Yellow gloves are the key.


The Golden Age Aquaman is a tour-de-force of subtle symbolic power.

The message in a bottle? Well, that's how surface dwellers communicate with Aquaman. And note the piece of a battleship that Aquaman punched a hole in. Yup, that's the Golden Age Aquaman, alright. He even came with a character card that has Superstrength listed as "punch a hole in a battleship".

Nice presents. I have to put more effort into my letter to Santa next year.

BTW, played a game with all underwater characters on the Big Monkey underwater map last week. The highlight was Aqualad using charge to punch out 3 rookie Black Mantas (I deemed they were Manta Men to the veteran Black Manta's real thing).

Second best highlight - Sub-Mariner, who should have dominated, took himself down to everyone else's level by rolling snake eyes on his first two attacks. Then the TotalToyz custom Magneto, Torpedo Man and Claw, beat the tar out of Prince Namor.

The message in a bottle? Well, that's how surface dwellers communicate with Aquaman.

And believe me, I wanted a crab to be holding the bottle, but I couldn't find one the right size!

Actually, that's a fragment from a U-Boat on the dial; Dale would have needed a bigger base to mount a piece of the Tirpitz or the Scharnhorst.

But the point about the Golden Age Aquaman punching holes through the Kriegsmarine's finest is well taken. Aquaman kept the seas safe for democracy practically single-handed throughout World War II and the subsequent Cold War.