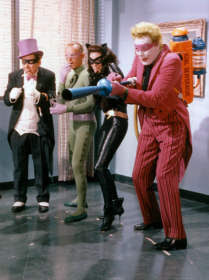 The United Underworld has pulled off the seemingly impossible with an across-the-board attack on the line of Batman titles, leaving three dead and two wounded.

Nicienza, and Peter Tomasi (see photo at left), have cancelled the Nightwing series, the Robin series, and the Birds of Prey series, all staples of the Batman editorial line. Each of these titles stars one of Batman historically principal in-family allies, Dick "Nightwing" Grayson, Tim "Robin" Drake, and Barbara "Batgirl/Oracle" Gordon.

Meanwhile, in another part of Gotham City, the incomprehensibly puzzling writing of Grant Morrison (see photo at right) has incapacitated the two main Batman titles, Batman and Detective Comics, possible killing their star, and leaving even long-time readers riddled with doubt.

Also crippled by the attack were Batfamily members Spoiler and the Huntress, hard-luck cult favorite Manhunter, women's issues pioneer Zinda Blake, and a host of supporting characters and secondary villains.

Reaction to the attack has been mixed.

"Zis obzezhion vit ze Batman is unhealt'y," opined local psychologist H. Strange (see photo at left). "It is a vise move to cripple ze Batman lines at zis time, particularly as his rezent zinematic zuzesses have led to an overzealous popularity vit zis character among ze masses." Strange posited that the changes may, in fact, be good for the Batman family in the longer run. "Vhatever does not kill, it makes stronger. New birt' comes vit pain. Pain unt zuffering vill make ze Batman strong, even stronger. Pain like ze lashing of ze vhip! Suffering like zat of the characters and readers of All-Star Batman und Robin!" 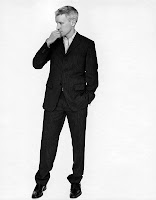 Another interviewee, who wished to remain anonymous and identified himself only as "a Stranger" to Gotham (see photo at right), voiced the concerns of many. "For years, the Batman and his allies have used darkness as a weapon; but now a greater darkness has descended upon them and upon us all! Seek solace in friends and band together against the lowering storm. I cannot join you, for I must remain.... a stranger. Otherwise, my sexual orientation would become too public."

The Gotham Times wants to know YOUR opinion. Please contact our Letters to the Editor Column below.
Posted by Scipio at 7:11 AM

Dear Editor:
Now I understand. What they did to Aquaman, Martian Manhunter, and Hawkman was just a warm-up.

Awwww, they'll be back eventually, in one form or another. Comic book characters ALWAYS come back.

Maybe Dick Grayson will become the new Spectre, or something. ;-)

Fabian Nicieza as Catwoman, huh? Morrison as Riddler and DiDio as Penguin work pretty well though.

And yeah, I have no clue what the hell is going on with Batman. Also remember that RIP takes place pre-FC, so that might not have been Bruce in Final Crisis 1. Which would explain how he gets taken out so quickly.

Well, I will restate something I said before on another thread. I don't attend comic conventions, so I may be wrong; but I've never seen Dan Didio and Joe Quesada together, and since each man seems intent on destroying a major comic publisher I have no reason not to believe they're the same person. So I will refer to them by the portmanteaunym of "Quesidio".

I don't follow Robin or Nightwing, but Birds of Prey was consistently one of DC's most engaging books. I'll miss it.

Maybe they're cancelling these books because Morrison is planning to kill the characters in the remaining issues of Final Crisis?

Though I can handle Nightwing and Robin titles being gone because each is in their respective Titans titles so they are still there...but Birds of Prey has been one of my guilty pleasures...

I did hear though that Huntress and Zatanna will have their own book sometime in 2009 called Huntress/Zantanna (what a creative title) but I don't know if that's a mini-series or a full title.

Ooh, ooh! Would it help if I got back my own solo series? We could but the word "bat" in the title somewhere...

Why can't we just get good standard batman stories anymore? Why does everything need to "shake up" the universe. Batman is the best book for a good ol' murder mystery. I want Nightwing back!

I think Tom DeFalco lost some weight and started shaving his head a few years back. He's since been doing to DC what he did to Marvel in the '90s. The train is pulling into the wreck, soon enough.

I've given extensive thought to where Nightwing needs to go (short version: back to basics/ Earth-2 Robin with swashbuckling personality and a much better costume.)

I've heard suggestions of Tim Drake turning out to have masterminded "R.I.P.," which would be delicious. I never liked that kid, as his origin is essentially "celebrity stalker." Don't much care where he goes, otherwise.

For Barbara, I like the Oracle identity and her personal empowerment as a handicapped person. I'd like to see her work closely with the Cassandra Caine Batgirl again. I don't think suiting up again for nostalgia's sake is to the good of the character or universe, nor is swapping BoP for "Gotham Girls" on a whim.

This is but a pimple on the tushy of reality. No worries!

My opinions are that Anderson Cooper is in no way, shape, or form the Phantom Stranger, and that losing BOP and Manhunter in such close succession is terrible news. With LSH getting knocked off as well, my wallet will be heavier soon.

Now where am I gonna get my Misfit fix!!!

I assume that the Bat-verse is simply undergoing a direction change that require the titles to be cancelled, though the characters will be seen in one form or another. I think Didio and pals looked at what happened during the Sinestro War and are applying not only in Final Crisis, but seek to apply it to other titles- this time without Geoff Johns at the helm.

What I mean is that they don't want to "shake up" the universe so much as to make the characters unrecognizable, but rather to take them in a new direction- presumably, that direction simply doesn't make sense for Birds of Prey or Robin to be a title. Maybe the DC brass really liked the recent Robin and Nightwing team-up and want to see more of that. Either way, I'm not worried. If anything, DC's probably saving us money by condensing the titles we love into fewer ones.

I figured it was simple, they've all decided that if they don't like comics any more no one else is allowed to either.

I fully expect all the canceled titles to be restarted, with bright, shiny, sales-guaranteeing "#1"s on the covers.

This is the sort of thing that happens when you are rude to the "stranger". So really, it's all Batman's fault.

But for the love of God, Zinda better show up SOMEwhere...or...or I'll be quite irate.

Zinda needs to date Hal Jordan. She really, really does.

No, *I* will date Zinda. Hal Jordan gets enough blondes who are also pilots. This one's mine!

Oh, I do SO want to see a fight between Hal and Dr. P over Zinda, LOL!

Zinda would ALSO probably enjoy it. And then drink the two of them under the table.

It seems like Frank Miller and Grant Morrison are competing to see who can f*ck up Batman more. I think Morrison's winning, after all, he's plowing Batman and his whole supporting cast into the ground in continuity...

Maybe Alfred can work a deal with Mephisto and we'll get Batman: Brand New Day.

This cannot have effect as a matter of fact, that is what I suppose.
steel buildings