What are the 10 most controversial stories DC has ever published, and why?

It's a difficult question (though I'm certain you are up to the challenge). I'm asking it because of something I saw during my Saturday morning cartoons: The Legion of Substitute Heroes.

To many people, they are happy remnants of the wacky Silver Age. They surely are that, but they are much more as well. Why, Night Girl alone is an existential paradox. To me, the Legion of Substitute Heroes are the ultimate symbol of comic book controversy.

Older fans will remember the one-shot Subs story that Keith Giffen did in 1985.

They took on and defeated Pulsar Stargrave (quite the big baddie in his day). I was in college at the time and not so focused on comics, but I did read the issue; it was a light-hearted romp of exactly the sort you'd expect from letting Giffen write the Subs.

Today this story would be an amusing lark, like the recent Legion cartoon episode that had the Subs in it. But in 1985, it was the biggest controversy I'd ever experienced in comics.

The mid '80s were not a light-hearted time and Legion fans -- well, what comic book fans are to regular people, Legion fans are to comic book fans. How dare this Giffen fellow make fun of the Subs? In my memory at least, Legion fans took to the skyways armed with atomic pitchforks and lugging plasti-tar and space-roc feathers, ready to destroy Giffen and the editors who permitted the desecration of the beloved second-stringers.

Those are stories that people talk about as being controversial, such as the Speedy the Drug Addict storyline.

By the way, it wasn't a storyline, really, just a story. In a Bronze Age tale from the pre-decompression era, Speedy was revealed as a heroin addict and cured of it in one single issue, using orange juice and chocolate bars or something.

Kyle Rayner's girlfriend Alex, killed and stuffed in a refrigerator, and the retcon-rape of Sue Dibny have certainly caused controversy. Sometimes controversy in comics is about real issues: drugs, violence, sexual abuse. But I think the really serious flaming controversies are not about such solid topics; they're about characterization.

The Speedy the Junkie story--yes, that was controversial in the sense that the press would cover it, but was it really that controversial among comics fans? I don't know; I think they'd stopped caring about GA and Speedy and that point. Alex in the fridge? Yes, it sparked much cogent discussion of violence and victimization, but people barely, if at all, discussed Alex herself or her victimizer, Major Force. Why? Because, the incident, memorably horrible though it was, wasn't out of character for any of the players involved. Rightly or wrongly, fans most savage denunciations are reserved for what they perceive as mis-writing of their favorite characters.

Outrage at "what they did to Alex"? No, outrage is what you have at "what they did to Cassandra". Alex was a comic book staple: friend/relative/beloved of a hero, killed as part of the narrative to give the hero a Tragic But Inspiring Loss, and I hope she now sitteth at the right hands of Thomas & Martha Wayne. But Cassandra Cain wasn't killed; her characterization was violated, and that, to a comic fan, is a fate worse than death.

We may argue occasionally over whether Batman/Superman is a Republican/Democrat, but it's mostly airy abstraction; tooth and claw don't come out until some fool suggests that Batman should kill the Joker or that Superman probably uses X-ray to look at women naked.

At this kind of controversy, Marvel has DC beat hands down with Civil War, which to Marvel fans is a veritable smörgåsbord of mischaracterization. Let's try to catch up!

So, with this in mind, what are DC's top 10 controversial stories (based on mischaracterization)?

Some of the ones that comes to mind are Superman Executing the Phantom Zone Criminals, Max Lord the Murderer, and (of course) the Giffen Subs. What say you?
Posted by Scipio at 9:12 PM 50 comments:

52. Any comic that makes me admit stunned admiration for Ralph Dibny -- THREE TIMES, no less -- is a nothing short of miraculous.

I know Wonder Woman was a long time a-waiting, but (for me) it was worth waiting for. The author captures who Wonder Woman is and can be perfectly. Hopeful without being naive; strong without being aggressive. Resourceful, heroic, clever, and confident. Inherently peaceful, a thinking woman's warrior.

Robin on a date was wonderful. Besides ... it refers honorably to Vibe; always a major plus for any book, film, or Broadway musical.

Birds of Prey beaned me repeatedly with plot twists and I thanked it every time. There are many wonderful things about Gail Simone's writing, but you know what's most refreshing? Her characters enjoy being superheroes. Or supervillians. Or whatever they happen to be. To me, that's DC: characters who enjoy being who they are, not who are miserable about it.

Mr. Bones gets manicures even though his nails are invisible? Fabulous.

Beppo was in Krypto this month; nuff said. But it read like a farewell issue; is Krypto cancelled? Shame...

Aquaman Sword of Atlantis? Well, I can honestly say I can hardly wait for the next issue!

Brave & the Bold. Crazy locked room mystery worthy of a Silver Age JLA story? Bruce Wayne and Hal Jordan in Las Vegas? A MacGuffin from Vertigo that made my head nearly fall off? THIS is the kind of comics I want, DC; thank you. Thank you very much. I officially forgive you for the DC Challenge ...
Posted by Scipio at 5:29 PM 23 comments:

It was a training mission. Batman had been asked to run a little "war game" to test an old friend's new team. Be careful what you ask for, Arthur, Batman thought. With Manhunter in tow, He signaled in the dark to Dr. Mid-Nite and they moved out to cover positions on the left and right banks of the river, while Black Canary covered their rear. Let's see how this Detroit "Justice League" fights in the field.

The superpowered grandstanders came crashing into center field. Typical, Batman thought. What else would you expect from a stage magician and a breakdancer? Arthur and his supermodel friend were surely being more prudent, sneaking towards us while submerged in the river. Yes, that's why J'onn is making such a show of himself instead of stealthing: he's providing a distraction to improve the chances of their attacks succeeding.

Spencer, what are--? Should've stayed behind me, as I instructed. The grandstanders, impatient for battle, tagged her right away from a distance, and now she's reeling. Having tasted blood, they'll be focused on her, giving me the chance to take them out. Unless ... ah, of course; here comes J'onn to "attack" me. Right on schedule.

I know how to take care of him, but Mid-Nite's in trouble; Aquaman and Vixen are dogpiling him. Smart; they don't want him healing any of our team. Well, it's up to Canary, Batman thought; I have to deal with the Martian, the magician, and the machisto.

A few bic lighters later, J'onn was out of commission and Vibe had followed suit. Mid-Nite and Canary were down, and when Aquaman and Vixen turned their attention to Batman, it was too late. Arthur first, of course, Batman reasoned, before he can get back to the river. Vixen ran to regenerate her powers ... but not fast enough.

But next time, the gloves come off. I'm adding the Elongated Man figure, the Sue Dibny pog, AND ....

Do you remember Goofus & Gallant? Since 1948, they've had their own feature in Highlights magazine, the one that's in all the pediatrians' and dentists' offices. You may have blocked it from your memory because you associate it with stabbing needles, screaming pain, and choking on X-ray tabs. 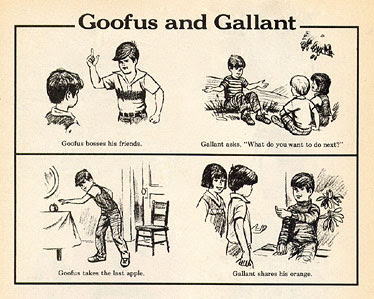 Here on "Earth-Prime" we call them "Goofus & Gallant". But in the DCU, they're called something else: 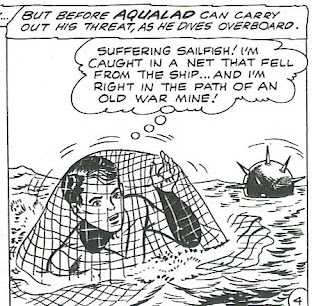 Aqualad traps himself and panics constantly. 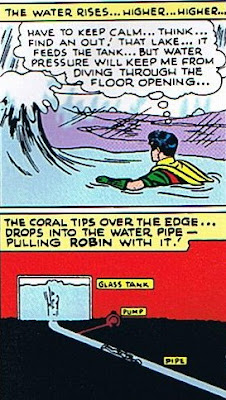 
Aqualad is jealous of the fame of movie stars and wants credit. 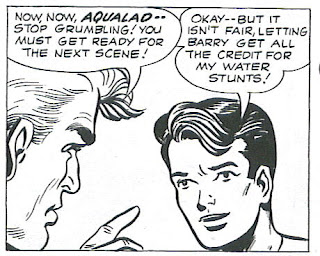 Robin is secure in himself and wishes well on others. 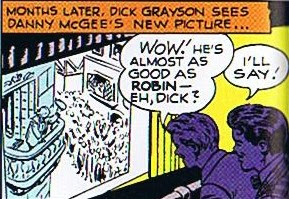 Aqualad, who lives in the ocean, is afraid of fish. 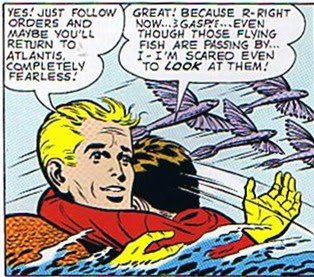 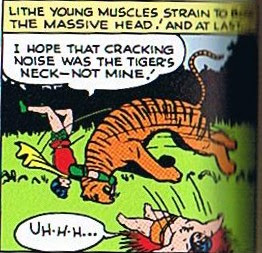 Aqualad is always ready to throw in the towel, and waits for Aquaman to save him. 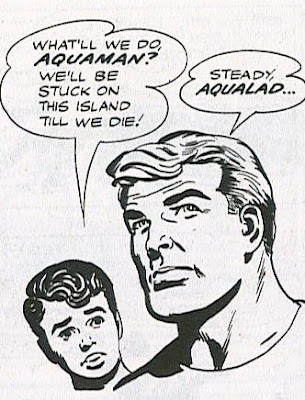 Robin confidently jumps out of a plane flying over the North Pole to save Batman. 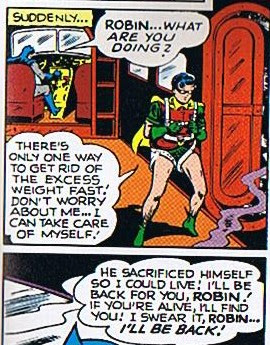 While wearing green bathing trunks and short sleeves, I might add.


Aqualad panics easily and waits for Aquaman to save him. 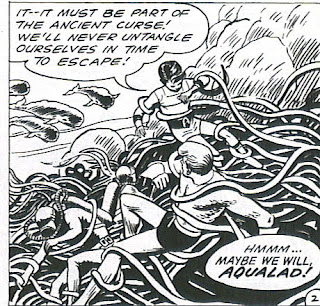 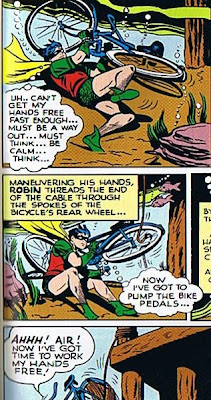 Did I say that already?


Taking aim at Aqualad is like shooting fish in a barrel. 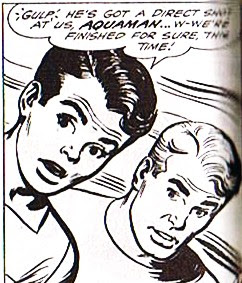 Taking aim at Robin is like putting a gun in your own mouth. 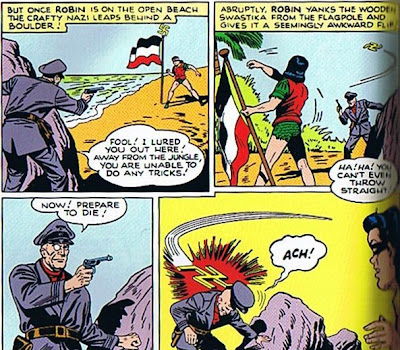 Remember, kids:
Don't be an Aqualad; be a Robin!