Speed, who wastes no time, has naturally arrived at police headquarters in time to stop the nameless Chinese Tong safecracker from stealing the jade buddha with a well-placed sock.

Speed's finale-sense is tingling like mad; he knows he's got no more time to waste and has to end this nonsense with the talking phones and quivering safecrackers and orders a raid on Hapsu's hideout.
Eek, Speed calls it the "yellow den"; how racist!  I'm rather disappointed in him. Sure, it's 1937, but Speeds spends HOURS at night in the Metropolitan Library pouring over old volumes of Eastern Lore, Chinese Custom, and Persian Jewelry.
I would expect him to be a lot more worldly and not so culturally insensitive. What kind of person would call it a 'yellow den'?
Hard to blame Speed for calling it the 'yellow den' when it's actually... "The Yellow Den" as named by proprietor Hapsu, who's a bit on the nose with his branding.  Even the police are embarrassed enough by it that they arrive via silhouette so you can't see their faces.
Hapsu, ballsy as ever, sloughs off the fact that he could be charged with konking and kidnapping an Ace Investigator, along with ordering a break-in at Police Headquarters.  When I design my Speed Saunders sixty-second videogame, Hapsu is definitely going to be a Boss.
Speed's having none of it, however.
Hapsu counteroffers; he'll actually SHOW Speed how the crime was done, if Speed will drive him to the post office to drop the jade buddha off in the mail first.  Yes, really.
I'd give good money to watch Hapsu and Speed pal around the Metropolitan Post Office together (I'm sure a branch post office wouldn't suffice), but copies of Detective #20 already require good money and WE ONLY HAVE SIX MORE PANELS!

Um, no, Hapsu, I don't see a round hole and that doesn't look like a panel, it looks like a curtain, because EVERYTHING in a Speed Saunders story looks like a curtain. Wait, are you telling me there's a gun that Speed didn't even bother to look fo--
BWHAHAHA! Hapsu has a gun rigged up behind some panel in Ming Toy's place, kind of like the surrealist pistol trap in the kitchen in the Killers of Kurdistan story. Never mind how he set that up, because it's ridiculous; point is, it's how he murdered Ming Toy and now he tries to use it to shoot Speed Saunders in his Face of Judgement. AS IF!
Then Speed does his regular Speed-explanation which explains nothing at all. 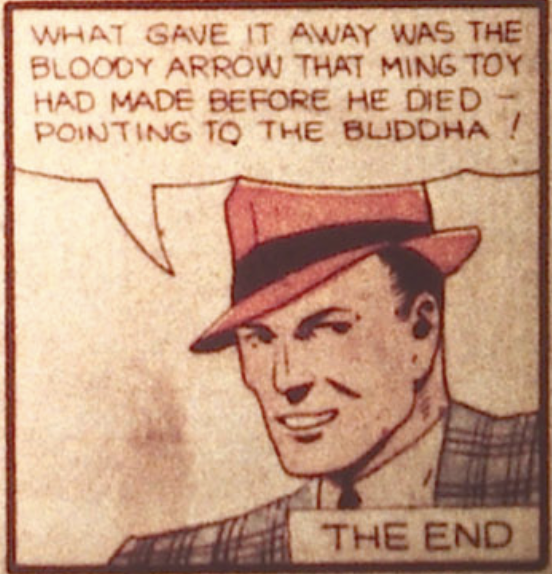 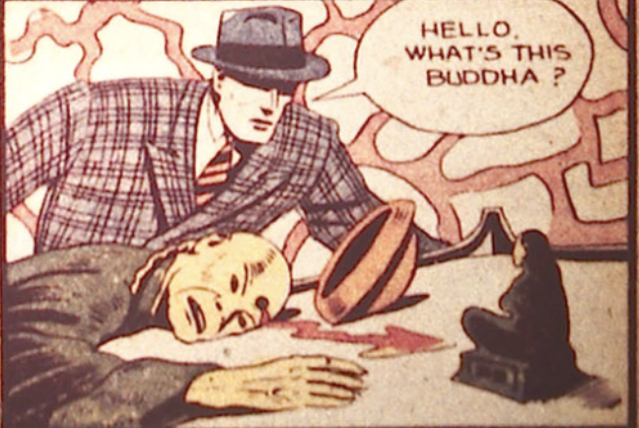 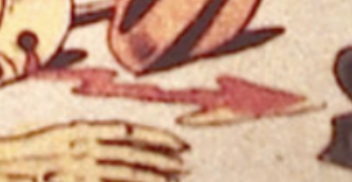 THAT?! THAT was the clue? The "bloody arrow" that Speed didn't mention, that isn't even FULLY INKED IN?! We were supposed to know that was an intentional clue left by a man WITH A HOLE IN HIS HEAD rather than just a standard puddle of blood oozing from the victim as there is in EVERY Speed Saunders story?! There's not even bloodstain on his FINGERS.
I need to just give in and accept it: the only real mystery in Speed Saunders stories worth paying any attention to is Speed Saunders himself.
Posted by Scipio at 6:00 AM

Did Hapsu & Saunders need to relocate to a different city for the end of this episode due to a quarantine? Where are the red-check drapes? We've got Phantom Zone criminals assisting with the interrogation, Safetybelt's sensory deprivation room, the Yellow Den's leopard-print wallpaper, some Hippie bead-curtains, solid curtains protecting what I'm going to assume is a map of Earth-2's Maldives, and the HR Giger killin' curtain that had better have a mannequin hand on the other side. Oh, and Speed's gigantic cowlick. But no red-check curtains like everyplace else in the city has!

And yeah, that's only a "bloody arrow" in that it's an existing arrow, inexplicably carved into the tabletop, into which blood has spilled. And what did that even give away!? That the religious statue carved from a precious gem might be relevant to crime?

The safecracker was trembling when Hapsu gave him his orders in yesterday's installment and now he's trembling under interrogation by Speed. So, in at least one character's eyes, Hapsu and Speed are equally intimidating. Which plugs right into the "Hapsu & Saunders, this Fall on ABC" concept. ;-)

"Did Hapsu & Saunders need to relocate to a different city"
No; Speed Saunders stories adhere to the Aristotelian Unities.

"Where are the red-check drapes?"

Well, the safecracker has a red-check hat, so there's that, anyway. Of course, you could say that about anything.

I'm starting to think that Speed Saunders stories are "written" by drawing a bunch of somewhat-related panels which are then assembled by a third party who attempts to put them in order, and then another person scripts over the panels. It's more like a drinking game than a story.

And NOW I have a game for my next party!

I don't understand Heroclix, but nevertheless I wonder whether it's even possible to translate Speed Saunders to any rule-based system.

...
...
Whoever you are, Anonymous, I thank you.
Until this moment. it had not occurred to me to make a Speed Saunders Heroclix figure.

I am but a Stranger, who has been following your blog since the mid naughties.

And I still sing "CEEEEEEEN-tral City!" sometimes when I'm in a good mood. I still can't remember all the words, but I know it's got something to do with gorillas and the Flash bugging Zoom. It's total word salad the way I do it.

Yeah; that one's pretty on point.