The Jade Buddha, Part 1: THERE IS AN URGENT CALL ON THE PHONE 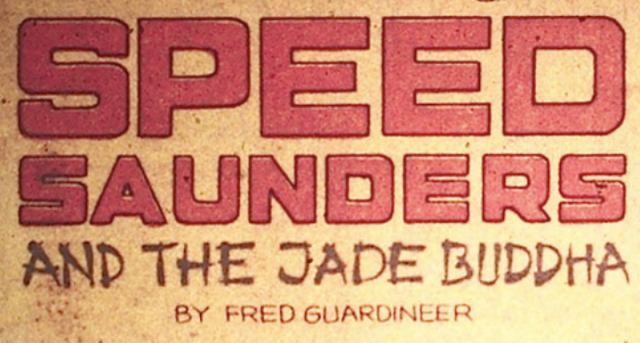 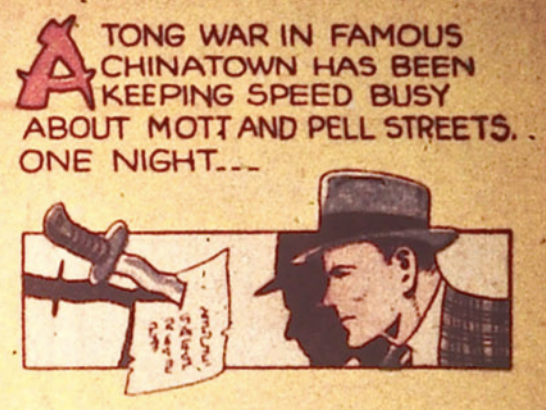 Those of you not familiar with New York City may be wondering about "Mott and Pell Streets"; it's an actual street corner, in the heart of NYC's Chinatown.  Those of you not familiar with Speed Saunders may be wondering about the wiggly dagger with the wiggly writing note that's violating panel borders. It's not important; it's "an Oriental dagger with Oriental writing" symbolizing what's been keeping Speed busy.  Learning to read Speed Saunders is like learning to read shorthand, because Speed does NOT have time to explain things to you (except for the final panel, where he explains EVERYTHING to you), so you have to interpret the Speed-signs along the way.
Speed is relaxing from Tong-warring, with his favorite pastime: speed-reading his own comic book. because Speed Saunders invented metatextuality.  He and Ann Bowman.
Speed goes off to respond to the call about Ming Toy RIGHT AWAY, of course, because RIGHT AWAY is how Speed does everything.  Tesseracting is against local ordinance in Chinatown (old-fashioned folk, you know), so instead of popping there directly Speed takes the Speedmobile.
Turns out the call to investigate Ming Toy's death didn't come from the authorities, but ... from the Wing Tong itself.  Because everyone's first impulse is always to call Speed Saunders, if they can.
As an Ace Investigator, Speed knows that looks can be deceiving.
Then Speed makes himself at home with the corpse of Ming Toy.  Well, actually, he completely ignores the corpse (still oozing blood from a fresh bullethole in the head) and instead takes in the decor like he's scrolling Etsy for ideas for his den.
But who are we to question the wisdom of Speed Saunders?  After all, it's 1937, and while corpses are propped up on every streetlamp, cute little buddha statues are still a bit unusual, because Wayfair hasn't been invented yet.
Uh-oh; a SPOOKY Chinese artifact that's recently been BROUGHT from China? Those never turn out well, kind of like "the Eye of the Daughter of the Moon" in The Mystery of Mr. Wong (1939).
Speed makes one of his Speed-conclusions after staring briefly out the window, which he gets to do because he's an Ace Investigator and doesn't have time for anything else.
Naturally at this point, Speeds takes the next logical step in solving the case:
he steals the buddha statue.
Let's see, it's the middle of the night, Speed's got his car and his hands on a rare Eastern artifact and that means...
Remains there in the city a volume of ancient eastern lore that has not been ravished alone in the middle of the night under harsh fluorescent bulbs by Speed Saunders' strong hands and pitiless gaze?  The mind boggles.
Speeds takes his new-found knowledge to Commissioner Safetybelt, on break from his plaudit-winning run as Daddy Warbucks in Broadway's beloved musical "Annie".

"What is your first step?"  Ooo, good question, Commissioner Safetybelt. Tell me, dear fellow readers, given the situation, what do YOU guess Speed Saunders' first step will be...?

"Ming Toy" is also the name of the "happy little Japanese" in the Kalmar and Ruby song, "So Long, Oolong (How Long You Gonna Be Gone?)"

It is indeed; but I was saving that joke for later :-D

Given the "organic" feel of the comic cover, I'm pretty sure that Speed might actually be reading this specific issue! That would certainly help him skip a few steps. If there was a Speed Saunders in our New York, it's possible that there's another universe were Detective Comics is actually a Sunday comic strip, where its Speed solves every case in three or four panels!

You might say that the cover is too vague to be any specific issue, but (a) most covers have more of an abstract layout, and (b) Guardineer's version of Chinese writing is basically "a bunch of scribbles," when he probably could've just caught a subway to Chinatown for lunch and copied something legitimate.

What I'm getting out of this is that India somehow expanded to gobble up Cambodia on Earth-2, since the only "Anghor" I can find is actually "Angkor," the empire that Angkor Wat (the "city of temples") is named for. Then, Chinese-American gangsters (tongsters?) raided a temple for the one cursed item, which then killed the one person who definitely didn't steal it, since he explicitly sent servants to do it for him. If so, the first step should probably be to look at a map to make sure that we're not being dismissive of Cambodia...

Well, technically the first step was to consult the library, so really we're on the second step here. But why quibble? Speed declares what step we're on, and that's that.

So. Regardless of labeling, we're on the next step. And this is Speed Saunders, so the next step is going to be something that is peripherally related to the case, but is also completely out of left field. And it needs to involve formal dress.

Speed will attend a party at the Chinese-American embassy, and interrogate the Chinese ambassador, who will point Speed toward a mysterious Tong overlord, who is also attending the same party.

It better become a plot point that Speed stole the statue too.

Hm, not bad, Bryan, and certainly consistent. He does eventually wind up with a mysterious Tong overlord (because of course he does), but his is a different path...

No Daddy Warbucks jokes to follow up on the initial reference? Oh well.

Dammit, at least tell me a party and formal wear is involved.

You are always welcome to write your own jokes if mine don't suffice.

For the curious, Mott and Pell today is home to two opticians and a Japanese snack shop. Naturally, the Tong have their eyes on you and their fingers in the cookie jar. https://goo.gl/maps/yAuAiEQuAeu58kog9