Speaking of movies about the Joker...

The forthcoming Joaquin Phoenix film will probably be great.  Everyone involved seems good at their trade, JP's acting chops are unquestionable, and it seems so far to be rich and well thought out.

It's almost too bad it's not about the Joker.

Alternative interpretations of a character are fine; they are part of what makes a character mythic rather than merely literary.  I am not one of those people to complain "The REAL Joker would use more conditioner on his hair!"  Although that's probably true; he's rather vain.

But when an interpretation seems so entirely off-base that it lacks the character's central elements that make him recognizable, then I start to frown.  And that's the case with Joker.

The film tells the story of hard-luck stand-up comic Arthur Fleck in 1980s New York (even if they call it "Gotham") City.  After being dealt one too many bad hands by life, he cracks and becomes a clown-like public menace.

The elements of this that miss the mark are pretty clear.  The Joker has a name, and a (tragic) backstory; he's a character for whom we will feel sympathy.  It's not surprising for a Hollywood film: these are near essentials for most cinematic storytelling, of course. They aren't a story so much as basic requirements for a protagonist.

But those are elements that the character of the Joker, from a mythic perspective, LACKS and always has. It's part of the character's appeal--well, let's call it 'genius' or 'schtick', rather than appeal.  The fact that some characters (such as the Joker or the Phantom Stranger) do not have proper names, backgrounds and origins isn't some kind of oversight, a convenient lacuna that a later creator can "helpfully" back fill to suit their tastes.  It's an essential part of the character. Something that Dan Didio doesn't get, by the way.

These characters aren't PEOPLE as much as they are concepts; the Evil Clown or the Mysterious Stranger. Much of their mythic power comes from that abstraction; if you rob them of that, there is little reason use to them. Unless they are just greasepaint to make your otherwise hard-to-sell movie suddenly salable, which the creators of Joker have nearly explicitly said it is what they are doing:


"[Director Todd} Phillips said it does not "follow anything from the comic books... That's what was interesting to me. We're not even doing Joker, but the story of becoming Joker." Rather, he used elements of the Joker lore to produce an original story." [Courtesy of Wikipedia.]

THAT is literary greasepainting. That's the kind of approach that turns the Phantom Stranger into one of Jesus's disciples or gives you Halle Berry's Catwoman.  You can focus on whether the results are good or not (Joker is likely to be a better film than Catwoman, for example), but don't ignore the role the 'greasepaint' method has in that and the longer term effects.  If the film is bad or flops, an opportunity was wasted and comic book movies take it on the chin.  If the film is good and succeeds, you are training creators that the key to using comic books as sources is to ignore as much of the original material as you can, except perhaps for the character's general appearance.

Not only does greasepainting happen with 'comic book movies', it's happening in comic books (writer Tom King's run on Batman isn't so much issues of Batman as is it Tom King's issues) and movies (Ari Aster's execrable work putting on a monster mask to pass as 'horror' rather than merely horrible). You could make the case that Bob Haney's body of work is almost entirely greasepainting.

In the case of Joker, Alan Moore is, of course, partly to blame for not getting the Joker right and in the vicious and crappy Killing Joke, convincing a generation of readers that the Joker is a tragic victim, the product of the world's callousness, and that at one time he was just like you and me. And if you don't believe my condemnation of what Alan Moore did with the Joker, maybe you'll believe Alan Moore himself:


"I’ve never really liked my story in The Killing Joke. I think it put far too much melodramatic weight upon a character that was never designed to carry it. It was too nasty, it was too physically violent. There were some good things about it, but in terms of my writing, it’s not one of my favorite pieces.

"I was naively hoping that there’d be a rush of fresh and original work by people coming up with their own. But, as I said, it [my work] was meant to be something that would liberate comics. Instead, it became this massive stumbling block that comics can’t even really seem to get around to this day. They’ve lost a lot of their original innocence, and they can’t get that back. And, they’re stuck, it seems, in this kind of depressive ghetto of grimness and psychosis. I’m not too proud of being the author of that regrettable trend."


It IS an interesting story, it's just not the JOKER's story. It's much more like Harvey "Two-Face" Dent's story (normal guy cracks under the pressure of a hard knock and turns against society).  In fact, most of my criticism of the Dark Knight's plot would vanish if the entire plot had been Two-Face's story with no Joker to be seen.  Meticulous planning to manipulate both sides of the law?  Dismantling the mobs by stealing their money AND catching them on RICO charges?  Pitting a boatload of good citizens against a boatload of bad criminals in a "Prisoner's Dilemma" to make a point about the arbitrary distinctions between good and evil?  Really, what could be more Two-Face-y than that? Why is the Joker in Two-Face's movie at all?

The Joker's original origin (in the idiotic "Man Behind the Red Hood", Detective Comics #148, 1951) at least knew well enough to preserve several essential elements of the Joker (with the efficiency typical of Golden Age comics stories, I might add): 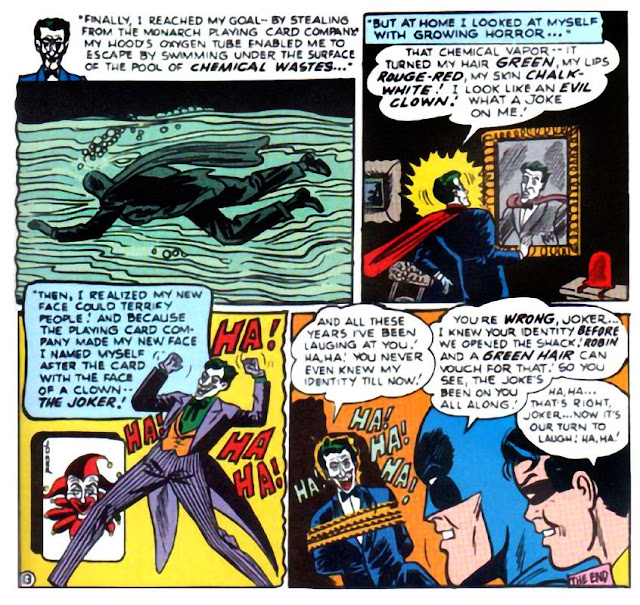 Even in this crappy throwaway detective story, Golden Age writers knew not to mess with the character's core.  Even Golden Age writers, the creators who gave us penny-themed villains and stories about milk racketeers, even THOSE people would have laughed at the foolishness of positing that the Joker, Batman's archenemy an all-around threat to society, was some poor schlubby hack who just had a bad day that somehow magically turned him into a criminal genius.  How can modern creators and readers have less common sense than the people who put giant props in every commercial property in Gotham City?!

The Joker is not society's victim; he victimizes society.  It may not be fashionable any longer to believe anything OTHER than the idea that society creates its own victimizers.... but that's not the Joker's story.

You raise a really interesting point about "The Dark Knight" and how much of it is Two-Facey. Not that I can be bothered to look it up -- it's not like I could just hit Google and do some research -- but I wonder if the original draft of TDK was with Two-Face as the only villain of merit, but the producers said "no, we already showed a Joker playing card last movie, incorporate the Joker". Maroni was even in the movie, almost as if he was originally intended to be something more than a red herring.

The core problem is that the Joker is much more of a plot device than a character, most of the time, and that's kind of borne out by the fact that he can't carry something as trivial as a backstory. And I've never been able to understand how what amounts to a literal clown became the villain everyone wants to write. It's fine if you're Cesar Romero, when you're on a show where the only backstory (prior to the appearance of Batgirl) is a throwaway line about Bruce's parents being murdered, but not so hot when you're around for eighty years in a universe that has a habit of cataloguing every minute of every costumed character's life.
As for the movie, on the one hand, I suspect that "stand-up comic becomes a killer clown" was pretty fully developed before realizing that Warner Brothers would sue. But on the other hand, I kind of appreciate the sign that DC is going to abandon their attempt at rushing to a shared universe where the characters have no reason to spend time with each other beyond their mothers' names.

I felt The Dark Knight was an grossly overrated movie. Sort of a run-of-the mill, competent Batman story, disguised as a work of genius. What I DID like about he Joker character in the movie is his "origin", it being different depending on who he tells it to. Almost like he's playing to their fears, or simply doesn't even know, anymore.

Alan Moore looks like if Sons of Anarchy and Duck Dynasty had a child...

100% agree, Scipio. "The Killing Joke" pretty much ruined the Joker. Never liked the ending either. The Joker has just paralyzed Batgirl and Batman shares a good chuckle with his arch nemesis? Yeah, right. And don't give me that crap about Batman actually killing Joker at the end. Brian Bolland himself denies that was the intent.