I have been wondering lately why no one but me seems to be rolling eyes at DC's current crossover schtick. I mean the "Doom" one with "Apex Lex" (which slows me down every time I type or read it, because I need to involuntarily eyeroll). Not the one with Leviathan.  Or the one with the Doomsday Clock.  Or the one that I probably don't even know about that probably involves Aquaman, because isn't there ALWAYS some Aquaman-based crossover happening at all times now...? 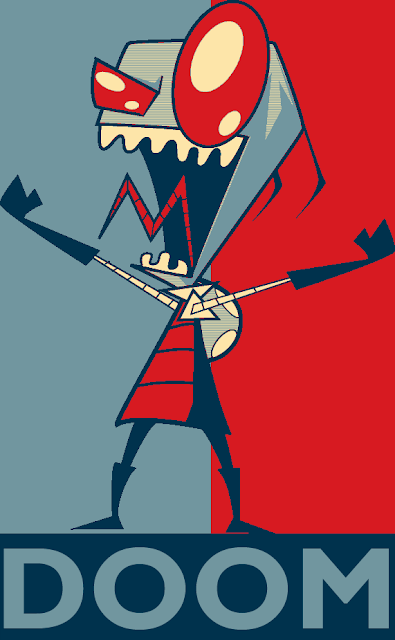 Doom is the one where they have cobbled together some folderol about Lex dying but getting better and embracing nihilism so that they could find some storyline excuse for the name "Legion of Doom", and being empowered by the latest new Cosmic Entity that is Beyond, Above, and Before all the OTHER previous Cosmic Entities because now we know the real story of the universe / multiverse / omniverse / metaverse / diversiverse / free verse.  Speaking of pretentious entities, all you kids who laugh at Silver Age names like "Starro" and "Despero" and "Amazo" can get off my lawn and read your comics about "Perpetua" and "Apex Lex" somewhere else.

Now-cosmically-empowered Lex is skittering about Earth offering Faustian power upgrades to any and almost all villains like he's the Exchange Counter in a DCUO game; "I'll offer you Spiked Synthium Shoulderguards and a Soder Cola if you agree to continue to be evil, which you are already doing for nothing."

This ridiculous "Let's Make a Deal" routine is SUCH a clear copy of the demon Neron in the "Underworld Unleashed" storyline that I've been amazed that no one seems to be noticing it. But then I realized : Underworld Unleashed was 23 years ago, so a lot of readers just don't remember it.

In short, the '90s was the era in which DC, as part of its neoPlatinum age, made a statement of rejecting the moral relativism of anti-heroes and turned up the moral contrast between its heroes and villains.  Underworld Unleashed complemented this approach by using a convenient plot device (a magical demon from Hell!) to give power-ups to whatever villains DC wanted to make sexy again.

That's part of a era-based cycle in comics. Over time the hero gets more powerful or SEEMS to be, because he keeps defeating his Rogue's Gallery again and again.  In short, Batman (or any other hero) always starts out like this:


One of the signals that a continuity cycle is re-initializing is when the hero is de-powered or his villains get powered-up.  "Uh-oh! NOW you must BEWARE the Polka-Dot Man!"


Villains who rely on gadgets for their abilities are granted "power internalization"; cold guns are replaced by ice powers, heat guns are replaced by pyrokinetics, the Prankster gets nanobots with which to craft props out of thin air.  Never forget that Underworld Unleashed turned Killer Moth into "Charaxes" and tried to sell us that as an improvement.

Lex's DoomShopping Network is also skipping some of the same villains previously skipped, such as the Riddler, who gets no offer from Lex (and demands to know why), who refused any offer from Neron, and who, you'll recall, was the only major villain in the "No Man's Land" crossover to do the sensible thing and just leave Gotham City.  The Riddler is immune to power upgrades because what he can do has nothing to do with 'powers'; his only limitation lies in what the WRITERS can do with him.

Lex, like Neron, is giving villains upgrades mostly just so that they can be bigger pains in the ass for heroes and as part of some Bigger Picture where he benefits from The Triumph of Evil.  Despite Lex's OWN upgrade from "Perpetua" (*snort*), his QVC-level offers seem pretty crappy.  Giving Cheetah a mystical artifact of the kind archeologist Barbara Minerva could dig up herself? Giving Black Manta a giant black mecha, which is the kind of thing Black Manta puts together in his garage on the weekends?  Giving Brainiac his 10,000th upgrade? At this point, I'm just hoping for a Steam version of Brainiac, so that the upgrades are automatic upon login.  Silver Age Lex, I remind you, could have outdone all this with some bed spring coils and the warden's busted transistor radio.

The only difference this time around is that Lex seems to be making offers to heroes as well (Batgirl, Red Hood, Martian Manhunter), but, of course, those come to nothing. Those are mere exercises in showing us how good the good guys are by refusing to make a deal with the worst person they know, who is currently trying to bring about the end of the universe.

The end result of this event is certain: the DCiverse will NOT be destroyed, any classic villains who were powered up will, over time, return to their classic forms, and a few less-than-classic villains will retain their power ups, get a few good licks in against their traditional foe, and either take their place on a higher tier in their respective Rogue's Galleries or it will be collectively, silently decided that they are more useful as background Z-list bad guys, so their power ups will fade away until they finally move to Star City to fight Green Arrow.

Get out of my head, man - or at least pay rent! I've been kvetching about this being Underworld Unleashed Redux since they pitched "Mysterious Gifts from EEEEEvil " as a plot point of Year of the Villain.
Since Year of the Villain has already disclosed that Captain Marvel (Shazam!, whatever) is "Infected", he's not going to be the deus ex machina to reset the status quo.

And, as an aside...does Lexy remember the whole "Forever Evil" debacle, where he actively resisted encroaching EEEEEvil, or did that disappear in the flashbang of New 52 -> Rebirth -> Whatever-we-are-now? Is smart/relatable Luthor of the 2000s extinct, now replaced by Alexander Manhunter of Mars? Will the solution be the return of the corpulent Human Flame circa 2008, nipple flamethrowers forcing apart J'onn & Lex? If not, can someone get a petition going to change it TO that?

I'll be interested to see a) if there's lasting effects/upgrades, and b) whether this is all set dressing until Morrison connects everything in Doomsday Clock.

I liked the original version better:

I haven't really been following new comics in a while, but it seems so utterly typical of Didio's DC to almost completely repeat an old crossover story that has had almost no impact on the line, add a loose and unnecessary Fourth World connection, and treat it like it's the culmination of extensive planning that will make permanent changes this time that will never be undone...until the next continuity reboot. And Lex as a fairy godmother who has a carefully calculated plan to achieve no apparent goal whatsoever, as a setup for a series with a bunch of "twists" and probably a few B-lister deaths for shock value, is so very clearly the sort of drivel that gets Didio excited.
Thank goodness this is the only major crossover event going on right now. Shhh! Nope! Don't interrupt my fantasy...

I think I might forgive the whole thing if Apex Lex offered Solomon Grundy some pants.

You're not alone, Scipio, but (to be fair to this idiotic event) the Shadow Thief actually (temporarily, no doubt) beat the Shade in that very issue.

All this said, I have little doubt that this whole farrago will end either with Lex making an imbicilic mistake in having overlooked something incredibly obvious ("Oh no! I forgot that the Atom could shrink!") or some minor hero (Air Wave, Jessica Cruz, my beloved Captain Comet) will come to the rescue unexpectedly. Superman, Batman, and/or Wonder Woman saving the day is too predictable for even this level of plotting.

Lex will be defeated, regain the business empire that he "irreversibly" liquidated, and we'll be back to the status quo in less than a year.

Of course, I can dream Lex gains some weight and a purple prison suit and we get the Best of All Possible Luthors back.

Does anyone else remember that brief period, right before some reboot, where Lex just sort of lost it, and started wearing a red wig and called himself "Alex" and started to UNDO all of the work he had done as Lex? When WAS that?

That was weird and truly fascinating and I wouldn't mind seeing THAT guy again.

1993 Team Luthor? Brain-in-a-cloned-body-able-to-grow-hair speaking in a fake Australian accent? Claimed to be his own illegitimate son Lex II?
Lexy was great there...until the inevitable heel turn.

Ironically, as the body deteriorated (and lost hair), he is trapped in his own body a-la-Johnny Get Your Gun. How does he get out? Underworld Unleashed. Sigh.

Wait! Who is making fun of Amazo? I want names.

Apex Lex sounds like an old Martian Manhunter gang leader, who gets defeated when J'onn uses his hithertofore unrevealed ability to change geraniums into caramel.

" Brain-in-a-cloned-body"
No, not that one. That one I remember quite well. "They Stole Luthor's Brain" was one of the most awesomely comicbooky things to happen in my lifetime. Who could forget his brain in tank shouting "MORE HAIR!"

I am talking about something that happened MUCH later, right before some big reboot....

I can't believe I didn't think of that.

And they have him fighting J'onn Jonzz.

I will forgive everything if Apex Lex forgets Superman, becomes an MM villain, and moves to Apex CIty.

Are you thinking about the time around Infinite Crisis when there were two Lexes running around? The Lex who was secretly Alexander Luthor Jr and New Earth’s Lex, who was the new Secret Six’s Mockingbird?

The Martian Manhunter could use a decent pair of pants too. Holy cow, it would actually be possible to tell a story where Apex Lex is all about tempting heroes and villains alike by offering them pants. He already got to Supergirl:

LEX COULD TEAM UP WITH PAUL GAMBI

No, Chad, it wasn't that.
It was a story or two right before a reboot (New52, maybe?) where Lex's age seemed ambiguously younger, donned a red wig and started to UNMAKE or destroyed everything he'd done as Lex. He sense or was affected by "the Big Change" that was coming, which immediately overwrote the incidents. it was fascinating but I can' for the life of me FIND it.