This is the fifth in my ongoing series of custom figures I have made or had made to add to my collection of regular Heroclix figures.

In our last installment, we immortalized Green-Hatted Exposition Man, whose transquartomuralistic communications let even the most dense readers follow the otherwise incomprehensible exploits of the Silver Age Martian Manhunter. Despite his extraordinary function, Green-Hatted Exposition Man is the most ordinary-looking of characters.  Not so this week's featured customized character!

In honor of Hawkman's impending return and newfound prominence in the DC "Metal", I give you:


Yeah, back in the Silver Age, all the heroes, even down-to-earth detectives like Batman, dealt with really weird creatures, often from space.  How much weirder, then, it used to get when the hero was an actual space alien himself, particularly on given to dressing like a bird and using tricked-out versions of ancient weapons, for no sensible reason.

And the Silver Age penchant for gorillas is legendary.  So it was quite inevitable that Hawkman would at some point fight a winged alien gorilla.  It's impossible to explain simply, but suffice to say the planet Illoral suffered from some sort of reverse-evolution plague, which turned its winged humanoids into winged apes (called "Wingors").

The Wizkids company has (oddly!) never chosen to make proper Heroclix figures for the Illoralan Wingors.  Fortunately, I found a ready-made sculpt that I changed not at all: the "Derhii" figure from the Pathfinder Battles miniature game.

In since the Illoralan Wingor is technically a generic figure that fights in groups... 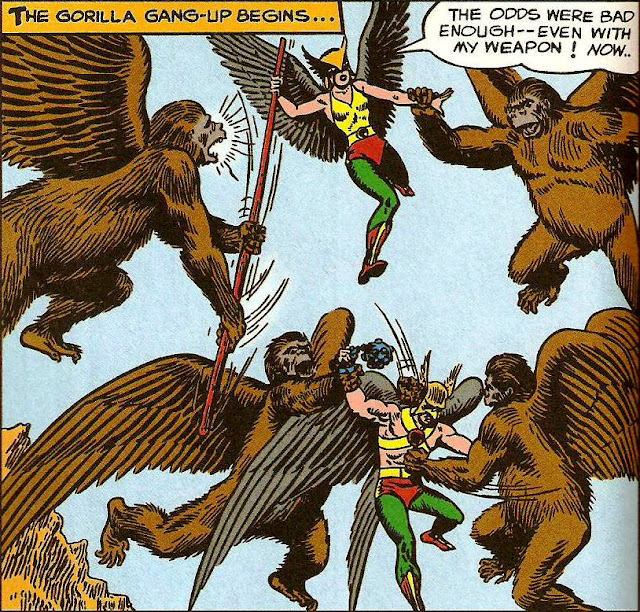 Even weirder, the best dial I found for them was Marvel's 75-point Jessica Jones: 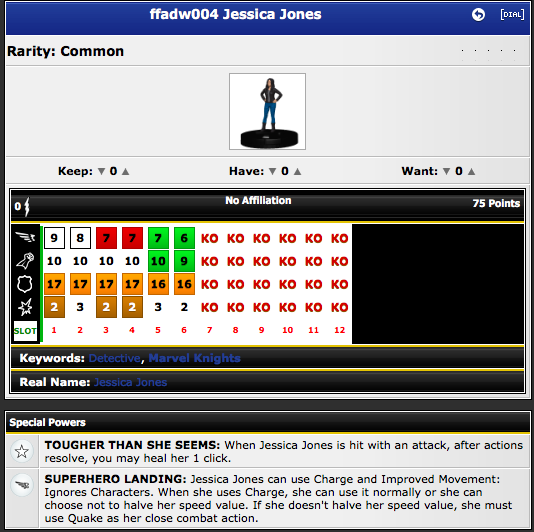 Which I have interpreted as follows: 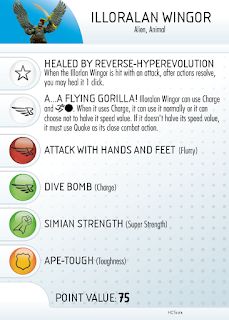 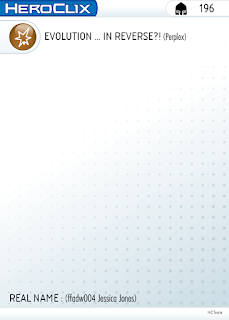 Sure, they take up too much room in my Heroclix storage boxes.  But, hey, it's the Hawks fighting flying gorillas, people; it's worth it.  Beside Hawkman's world is woefully under-represented in Heroclix.  Speaking of which, which Hawkman character would YOU like to see in Heroclix...?
Posted by Scipio at 9:22 PM

Haven't played Heroclix, but when it comes to the Hawkman mythos I'll always campaign for more Manhawks in our lives. They are so creepy that I'm surprised we haven't seen a modern reboot of them in the recent past.

Palmiotti & Gray introduced a home-grown version of the Manhawks in their 2005 run on Hawkman.

Speaking not of Heroclix but nevertheless of Hawkman...Any thoughts on why DC has so often felt the need to COMPLETELY re-invent him to the extent that he might as well have been an entirely different guy? It's been so long since I cared very much about DC that I don't immediately recall any of the details on how they did that but I remember that they DID do that and I remember that I never understood WHY they did that.

You're -- and I'm saying this as a genuine, sincere compliment to your knowledge and talent -- you're one of the few people I can think of who can probably make all of it make sense to the rest of us, and AFAIK none of the other guys who can probably do that have blogs, so while I'm aware that you hate it when people offer suggestions on what to write about, I'm respectfully requesting that you consider holding forth on this particular topic at some point. Doesn't hurt to ask. Thanks.

I'd suggest Charley Parker, the Golden Eagle from JLA #116; One more step towards a full set of Titans West.

Agreed, Brian; I already had a Golden Eagle custom made after his appearances in the Palmiotti Period.

Cybrid, I don't think he HAS been redone that much frequently than other heroes, all of whom (other than the Trinity) have received similar treatments. I think it's more a function of the spottiness of his publishing history, so that every time you read about him he's 'just been rebooted again'.

I suppose it won't do owing to have batwings rather than feathers, but Reaper Miniatures makes a "demonic ape" fig that's otherwise pretty close as well. Got one painted up over on my blog: https://brokenstarsburningships.blogspot.com/2019/05/wormwalker-winged-ape-more-custom.html