I have gone on record more than once with my admiration for writer Sholly Fisch.  But it can't be overstated.

Unquestionably, the best DC book you're not reading right now is Sholly Fisch's Scooby-Doo Team Up.

That's intrinsically astonishingly.  There are few intellectual properties in current American culture stupider than Scooby-Doo & Co.  Even at five when I first saw it, I could tell it was stupid. There are no real mysteries and even for a cartoon it's unrelentingly formulaic.  It's really more an anti-intellectual property.  I am not a fan of Scooby-Doo.

I am, however, a HUGE fan of Scooby-Doo Team Up and that's solely because author Sholly Fisch is an unrelenting genius. Not only does Fisch lampshade EVERYthing wrong with Scooby Doo from all angles, he uses Scooby-Doo as flashlight to shine a light on every foible of the entire DC Universe. Here's a mere handful of examples from its fifty issues.... 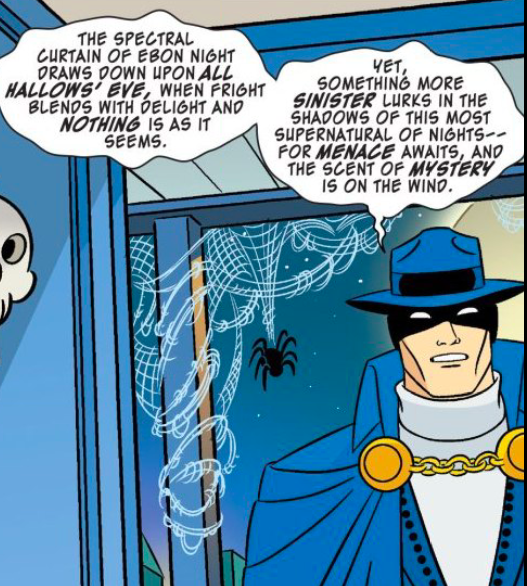 ...mercilessly punctured by the Scooby Gang. 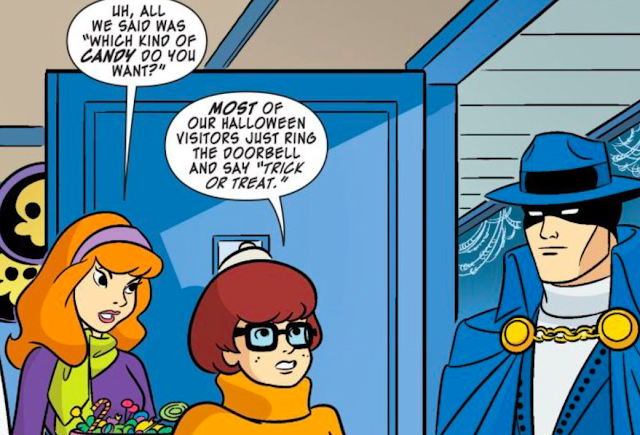 Mystery Inc. teams up with Batman and Robin to take down the Spook and False Face, who are discovered to be the manufacturers of all the monster disguises the Scooby villains wear.  It starts with a casual mention of when they all met... 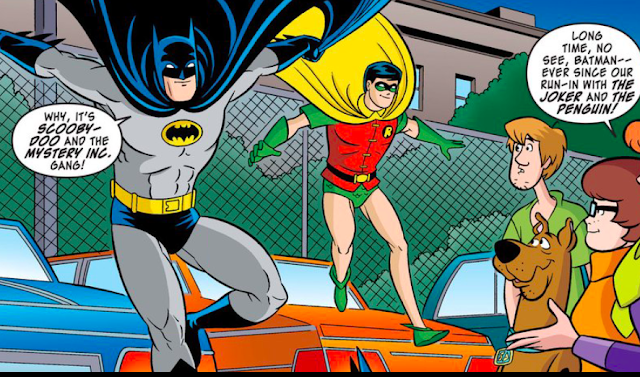 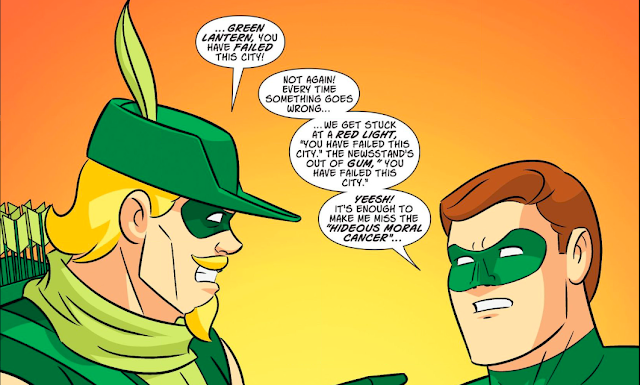 and Green Arrow's rogues gallery as a collection of Batman castoffs. 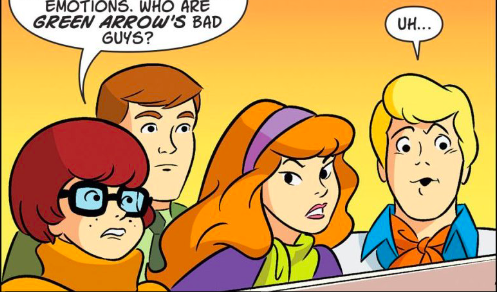 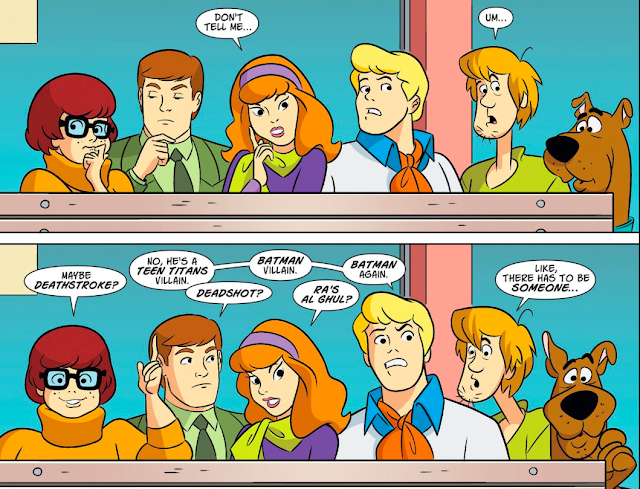 Ollie has a reply, but you'll have to go find it for yourself.


At one point, the Specter has to take over Scooby Doo to confront Tamarak... 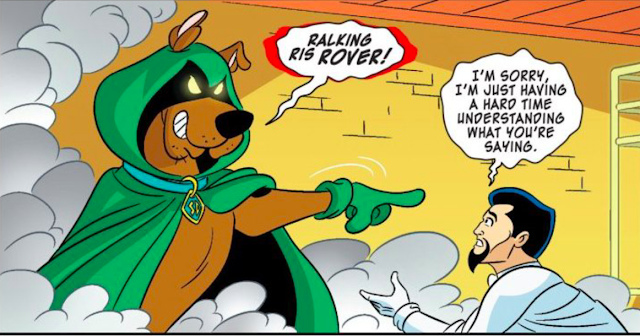 but not even Spectre-Doo can overcome the dog's speech defect.

The examples are nearly endless.  In Atlantis with Aquaman, for example, Fred has to be repeatedly reminded not to pull off the bad guys' masks (as he traditionally does) because they'll drown.

When they visit the Flinstones, Fisch doesn't have to make a Italian opera joke, especially since almost no one will get it. 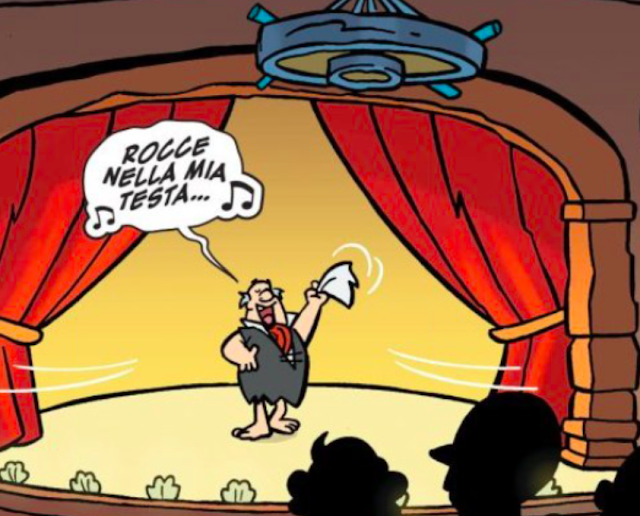 But he does anyway.

Why, I could do an entire post of nothing but Scooby-Doo's other conversations with the various dogs of the DCU: 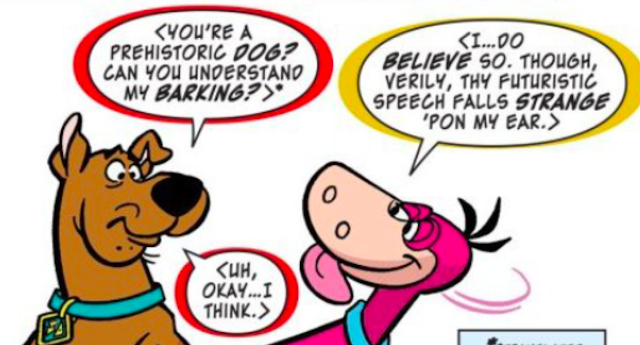 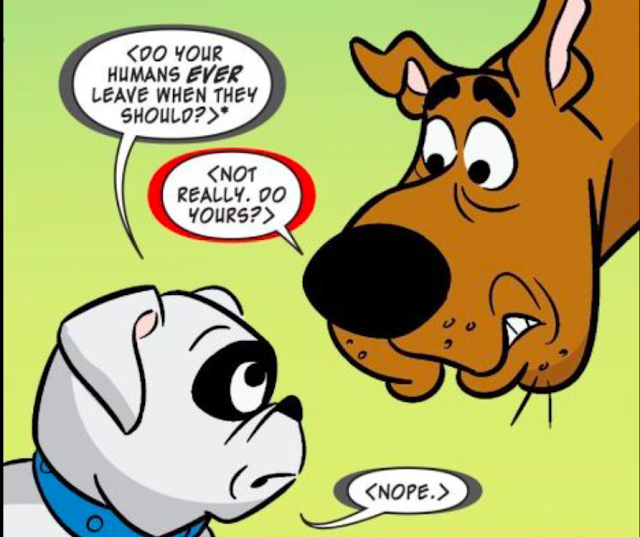 I'll leave it to you to discover Scooby's interactions with Ace the Bat-Hound and the Canine Space Patrol Agents yourself.

The Scooby Gang's act is honed to such predictability that Fisch is able to use it expertly as a scalpel to dissect the DCU (in a loving way).  What's more, the stories are good AS STORIES not merely as comedy/satire.  Fisch never lets schtick distract from the need for character and plot (although the tastiness of the Fisch-schtick is delicious!).

Do your soul favor and buy the collected editions online or at the store today.

"The Flintstones" is pretty surprisingly excellent too. Who woulda thought?

And totally agreed about Sholly Fisch. DC would do well to put him on half their books like they did Geoff Johns last decade, or at least put him on more than one book every three years. I have yet to see Sholly Fisch write a story where he didn't even know what he was doing.

Ha! I AM reading Scooby-Doo Team-UP, and it IS the best DC book being published. I would have said something, but I figured you were already reading it, Scipio. I buy both the singles and the trades, because I'm terrified it will get canceled, like every other good book (most written by Sholly Fisch) DC has published. I started to say in its all-ages line, but it's the best book they're publishing, period.

For a hard-core Hanna-Barbera fan like me, this book is heaven. And yes, the cartoons were pretty much all cheesy (well, Jonny Quest is brilliant, period), but I still love them. And yes, I have them all on DVD (thank you Warner Archives) and I STILL watch them.

And I fully support Anonymous' statement about Fisch in charge of DC.

Yeesh! It's enough to
Make me miss the "hideous
moral cancer" ...

Oh, man, if only an ellipses counted as a syllable, that would so be a haiku.

I...I had no idea! The bit with Ollie being a jerk and Hal was particularly delightful. I must sally forth and start reading these!

One of the (many) things I enjoy about it is that it doesn't really rely on continuity per se, it has continuity of thinking. For example, when Mystery Inc meet the Great Gazoo in the Flintstones' era, they try to interpret him in DCU terms they already understand, asking him whether he's a magical imp from another dimension.

Gazoo replies with his characteristic lack of grace.