Ordinarily, I begin posts about the Martian Manhunter by talking about how weird or unloved he is.  But lately -- particularly compared to the other founding JLA members -- he's doing pretty well.

He's got his own series (where the fact that he's weird is finally being made to work in his favor), his backstory's being cleaned up, and he's been given unique threats and situations to deal with. He hasn't lost his memory, like Batman (in fact, he's gained it back).  He hasn't lost his secret ID, like Superman (in fact, he seems to have gained several).  He's not spending all his time fighting his sibling, unlike Wonder Woman (unless they are going to make Ma'alefa'ak his brother again, which I doubt).  Okay; like Aquaman, his countrymen have been trying to kill him, But at least his wife isn't; in fact, he never even HAD a wife.  On the whole, for being the Martian Manhunter, J'onn J'onzz is doing pretty well, Except for being dead, but we know that's just a temporary set-back for JJ.

When a character starts doing well in comics, there's often a lag time before that goodwill is felt in other media and ancillary merchandising.  So it could be another ten years before we see a Heroclix figures of, say, Ma'alefa'ak or the Martian Man-Eater or Mister Biscuits.  Unwilling to wait, I've tried to do my bit for J'onn-boosting by having customs made of some of his cast (Diane Meade, Captain Harding, Officer 'Big Mike' Hanson).  MM foes are slim pickings; I've long had a Human Flame custom (because everyone loves the Human Flame) and I have ones on the way for The Falcon and the Human Squirrel.  And soon I will get out some yellow paint and turn an old MM figurative into that wicked mastermind, that ultimate expression of Martian lawlessness, the nefarious B'RETT.

So, to prepare for some Manhunter-focused Heroclix games I have designed a map just for them. In his original adventures, the locals had created both a museum and a theme park dedicated to J'onn J'onzz.  So surely they would have had at least one commemorative plaza as well:  I call it: "Mars Park" 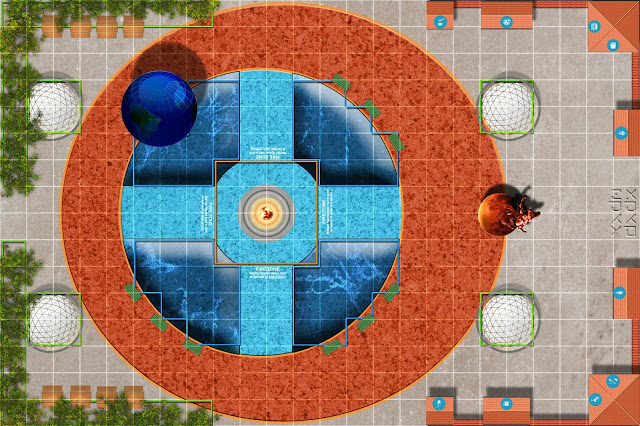 The center is occupied by inlaid stone areas showing the orbits of Earth and Mars, punctuated by statues of each planet (blocking terrain), with Mars held aloft by J'onn J'onzz, like an Alien Atlas (copyright Frank Diabolu) upholding the memory of his lost world.

The Earth orbit area has sunken pools of water as befits the Big Blue Marble. And at the center of it all is a well-lit globe of eternal flame that represents the sun--AND a danger to Martians, due to their weakness to fire.  As a result, the area around the fire is special terrain injurious to Martian figures (who take damage each time they enter it, each time they start a turn there, and each time they end a turn there)
Posted by Scipio at 9:23 AM

"Mars Park - Where Apex City goes to reflect on just how awesomely crazy our 'home-grown' hero is."

Also, I'd play this.

Can we assume that there's some guy whose job it is to move tiny figurines of everybody on the Earth model? Because it's not Apex City without an absurd attention to irrelevant detail, somewhere that nobody would think to check.

And sadly, the writers didn't have the foresight to introduce B'Rett S'Omers. The DCU's version of the Match Game was probably even weirder than ours...

There is seriously a character called the Human Squirrel? Be still my heart.

Oh, SallyP! It's only been eight years since I introduced the two of you...

The retconning with Martian Manhunter's origin was sorta mega-lame through. No Green Martians, no family, no M'gann? Unpossible!
Maybe they will retcon the retcon as TOTAL MINDSCREW and the propa origin is the real one.

They really need to work on fixing those powers, through.

The Human Squirrel! Bah!! How can a villain named after a cute, harmless, often comical animal ever be a credible threat?

Gotta go; "Gotham" is on! Love that Penguin!!

Squirrel Girl! Bah! How can a heroine named after a cute, harmless, often comical animal ever be a credible Avenger.

And yet, Squirrel Girl will be a member in good standing in NEW AVENGERS whenever it starts up in the fall. But then, the Avengers franchise in the comics has become a sick joke, with anyone able to waltz in and take a seat--as witness, not only Squirrel Girl, but also Deadpool and Sabretooth, plus no-name replacements for several other Avengers.

And now, back to your regularly scheduled DC rants. . . .