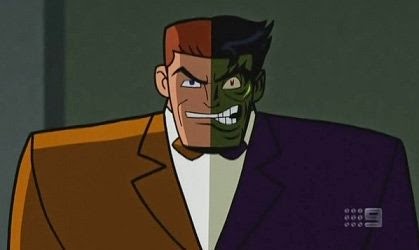 “Ladies and gentlemen of the jury, the evidence has alreadybeen placed before you: it seems increasingly likely that DC will be rebooting its multiverse in the spring of next year.  The question being put to you is not whether it will… but whether it should.
I call to the stand my first witness:  the Man of Steel, Superman.”

“Do you solemnly swear etc., so help you Rao?”
“I never lie.”
“Unless someone’s asking Clark Kent whether he’s Superman.”
“Superman never lies.  Clark Kent, however, is a lying sack of babootch poo.”
“Superman, can you tell the court how you feel you’ve fared in the New52 reboot?”
“World’s best known superhero loses parents, girlfriend, and job overnight.”
“You really are a reporter, aren’t  you? Please elaborate.”
“Well, my parents, universally credited as the source my unwavering moral compass, used to be alive before. Now they are dead.  No big reason for it. Just easier not to have to write them, I suppose.  I used to have two long-running love interests, Lana Lang and Lois Lane.  Curious—both have the initials—“
“And now?”
“Lana’s an engineer.  Lois has some other boyfriend.”
“Who’s secretly a supervillain or a longtime rival or your moral opposite?”
“No.  Anyway, now I have to date someone who grew up in a lesbian commune and has a bondage fetish.”
“Charming.  And work?”
“I think I work at some website that can’t possibly support me and is really the brainchild of Cat Grant.  I think maybe I still live with my pal Jimmy Olsen, who’s now a wealthy heir.”
“So…they’re supporting you?”
“I—well, they are my supporting cast.  Maybe I crush coal into diamonds and sell them, I don’t know, don’t ask me.”

“You seem uncomfortable with this line of questioning.”
“No….it’s …the collar. It’s itchy.”
“And that bothers YOU?”
“It’s super-itchy.  Besides, I’m no longer wearing underwear and that makes me feel a little self-conscious.  That’s not how I was raised.”
“How do you know?  Your parents have been dead since the reboot so you’ve never met them.”
“Anyway, I don’t think I’m faring very well since the reboot.  Ever since it happened I’ve been feeling short-temped and stand-offish.”
“So you’d appreciate a chance to go back or start fresh?”
“That’d be super, yes.”
“No more questions.”

"a lying sack of babootch poo" should be added to the Internet lexicon for the betterment of all generations.

it seems increasingly likely that DC will be rebooting its multiverse in the spring of next year.

Wait, what?? They're finally admitting the New 52 didn't work?

You know what rhymes?

All reasonable doubt has been removed.

You know, DC really needs to stop labeling things as "post-" and "new." It's getting very confusing.

Hopefully, they've learned an actual lesson, this time, and won't keep digging the Moore-Miller-Wolfman hole of heroes that don't like each other and "have hangups and problems just like us."

Also hopefully, babootch poo will be the alter ego of the next Blue Beetle.

And logos that didn't look like they were churned out by an intern over a weekend would be nice, too. But mostly the babootch thing. And I'd also like a resolution as to whether babootches actually have three eyes or if that was anomalous enough to make them worthy of a saying.

Of course, they could maybe just fix the universe they already have, but I guess everybody has an origin itch again...

To be fair, the death of Superman's adoptive parents was in established continuity from his first appearance in 1938 up until 1986. Their death was a defining event in the pre-Crisis Superman's character; it taught him humility, that there were some things he just couldn't fix.

The undoing of that was the invention of John may-he-Byrne. Byrne basically did to Superman, and pretty much DC Comics as a whole, what Ted Cruz would like to do to the Constitution: take out everything he didn't like.

"Their death was a defining event in the pre-Crisis Superman's character".

Hogwash. That didn't happen until Superman #161 in May 1963 and the story of their death was extremely obscure, something only a hardcore Superman geek would know.

Dale, don't swallow every retcon you get fed; and DON"T feed them to others.

And leave your political views whatever they may be out of my comic book blog.

I apologize for the political commentary. You're right, it had no place here.

Reboot things if you must, DC; just take a look at why your animated series work so well. Right out of the gate, your characters are in a good place for storytelling; if you even bother with an origin, it's done quickly and at the end of it your characters are ready to go.

I think the pre-new-52 DC main universe was considered an "amalgam world" of the various multiverse worlds; let's bring that back. And let's bring that back in full swing: all the Robins, all the Flashes, all the formerly dead Teen Titans alive and in good condition. Origins can be sorted out later. And for God's sake, try to take better care of your properties this time!

The one conceit of the new 52 that I think we can agree was an unqualified failure was the early distrust of the heroes, which continues to this day in the crappier Superman titles. That does to Superman what James Richard Dacres tried to do to the USS Constitution. Superman's status quo works when he's the man that everyone trusts and respects; give us that. (Incidentally I like how Snyder is undoing this over in "Batman", where early in his career, Batman is proving to Gotham beyond a shadow of a doubt that he is their protector. Now go back and read "Justice League" #1 where you've got police helicopters chasing Batman around ... Snyder's version works, Johns's version doesn't.)

Scipio would write it differently and, indeed, might completely disagree. Nevertheless, I understand the DC universe to have been founded on cleverness (detective stories) and optimism; the Marvel universe, was instead based on unhappiness and angst (monster stories and teenage romance titles).

So, fine, then. There is a single panel in Superman #1 reporting the death of Kal-El's adoptive parents that got overlooked for a decade thereafter.Along with multiple super powers that writers created for him, for a single story, that we no longer recall. (You do know that he has a all the powers of a Durlan, too? It is one one golden age story, somewhere. Then there are the powers they made up for him on the TV show.)

I appreciated Scipio's post. I *think* I read that the new 52 might have gone too far by making this imagined universe signifacntly bleaker than necessary as the clock got set back. I would agree with that.

Of course, something else will happen next year. Maybe that will fixed. Maybe Shayera Thal wil be back as the wonderful person she once as.

Point taken. All I was really trying to do, in my original post, was point out that the death of the Kents was not an invention of the New 52, but rather a return to what had been prior to 1986. (Wow, it almost sounds like I'm defending the New 52! Maybe I'm Bizarro Dale!)

Wait, other Anonymous -- ALL the powers of a Durlan? Or just changing the appearance of his face through control of his muscles?

Myself, I see Superman as valid whether or not his parents are alive. I prefer them to be alive, and I suspect the reason they were killed in the first place is because Superman is supposed to be an adult, therefore he can't simultaneously be a child. At least that was how it worked in the 1940s when marketing to children. But in the past few decades, with demographic shifts among readers, it's increasingly relatable that Clark Kent's parents are alive and he has a relationship with them, without it detracting from his adulthood.

Oh, I forgot to mention the single biggest fix of the new 52: Aquababy wasn't killed off. Killing Arthur Jr was the moment at which the Bronze Age went off the rails. That was the point at which DC decided that the best thing to do with its action figures was to break them all just to hear them go "SNAP!", but then sat around wondering why none of their action figures were fun to play with any longer.

I think I agree with you; I want my old continuity back, too! But are we talking about the same "old continuity"? DC has had so many...