Scream Team and the Scary House

Well, I know it's a little early for Halloween.  Okay-- a lot.  But when you're a horror fan like me, Halloween is more of an attitude than an event.  Kind of like how DC is with reboots.

Anyway, my Halloweeniness has been inspired by the release of the newest Marvel Heroclix set, which features many of Marvel's classic monster characters.

I've commented before that one of the sources of the differences between DC and Marvel is that, while DC's principal roots are in detective and pulp stories, Marvel's are in monster and romance stories. This has given Marvel a rich tradition of monster lore: Tomb of Dracula, Frankenstein's Monster, The Living Mummy, Werewolf by Night, Man-Thing, "Zuvembies", Dazzler.

These characters are represented in Marvel's most recent Heroclix set, and I snagged some myself to help complete my longstanding desire for a Halloween theme team with which to surround DC's Scarecrow.

Sure, Gentlemen Ghost isn't exactly the most terrifying specter in the afterlife, but he is DC's best known ghostly villain (certainly in Heroclix).

Once I composed this team, I longed for an appropriate map to play them on; Heroclix just doesn't have any scary maps.  Then I stumbled across a custom one that I had forgotten about! I'd designed it but never had it printed.  Here, then, is 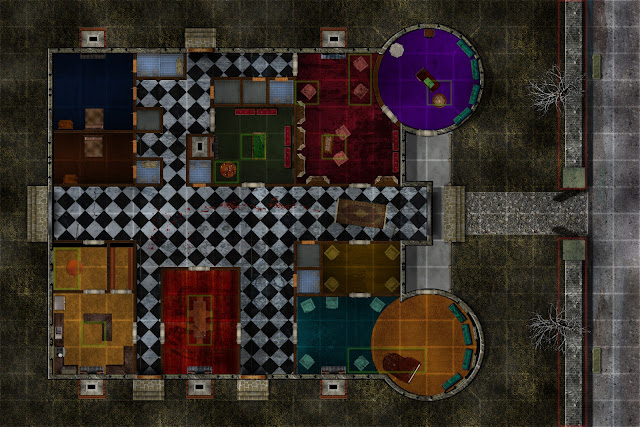 Those of you who ever heard of the defunct "Horroclix" game will recognize the style.

I'd been trying to put together a team of DC scientists to fight this group.  Now, most of DC's really science-y scientists are villains... but I managed to come with these guys:

That's 392 pts, which perfect to fight the 401 Scream Team, and if you want them to go up against the 494 version the answer is simple.  Just add on:

I know which side my money's on.
Posted by Scipio at 6:08 PM

Yes, this set was a true gift for fans of 70s Marvel monsters, like myself! About the only ones they left out were the Golem, the Scarecrow, and It the Living Colossus! I mean, they even included Manphibian!

I gather, from Googling, there's no Dr. Thirteen Heroclix.

Heh, it's funny you should mention that, Ron.

I, too, though right away about needing a Dr. Thirteen to go against these guys.

Although there isn't a Dr. Thirteen figure, I did get a "Frank Drake" figure (from the same Marvel set).

I use him as Dr. Thirteen. The dial is similar to what I'd want in Terry (Stealth, Outwit, Penetrating Blast), plus his special power is:

"Frank Drake can use Outwit. Once per turn, when he uses it to target a character with the Monster or Mystical keyword, he may use it again targeting the same character."

Sounds like he'd make a good Carl Kolchak, too!

Dazzler. Nicely done. You snuck it in there and made me choke on my coffee.

Scipio. . .buying MarvelClix. . .what universe did I wake up in?

Hey, I am not the one who called her a monster.

Well, he's acting against his established character; must be the New52.