There are lots of new DC Heroclix figures coming our way, what with the movie-based Dark Knight Rises set (already released and in my hands), the DC Heroclix 10th Anniversary set (with corresponding Golden/Silver & Modern versions of a handful of iconic characters, such as Brainiac, Superman, and Catwoman), the New 52 Justice League set (whose Superman, Wonder Woman, and Aquaman have already been previewed), and the forthcoming Batman set (which remains mostly in a deliciously dark Gotham-like fog).  .


In celebration, I've decided to refresh my collection of home-spun Heroclix maps.  Wizkids shows gobs of imagination and ingenuity in their creation of power dials for characters, but their map-making is, on the whole...uninspired.


So, I've always dabbled in creating my own, with varying results. Some are crackerjack, enough in fact that other players have written me requesting the file so that they could get them printed for themselves (the Iceberg Lounge and the Abandoned Church seem to be perennial favorites).  Others have been less successful in my eyes, often because what seemed workable or attractive on the screen turned out to me less playable than anticipated.


The most common flaws in my maps have been overcomplexity and a tendency toward garishness.  The map below, of an alley in Gotham City, is my attempt to course-correct.


I've used a more muted color-scheme, much lower on the Sin City/Dick Tracy scale of color saturation than in the past.  I have also experimented here with ways to convey essential gameplay information (such as hindering and elevated terrain) that I hope are more subtle than the rather garish neon markings that Wizkids uses on all its standard maps (for reasons of clarity, I'm sure).

I made the whole map first in a "normal city" way: 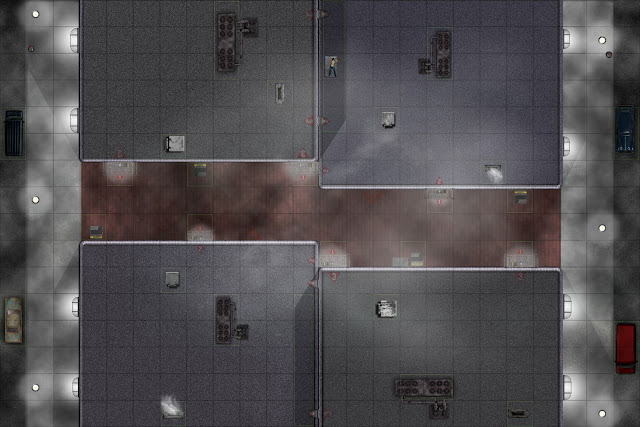 This could be any city, really.  Except for Apex City, of course: no meteors and none of the buildings are on fire.


But then I ... I just couldn't stop myself.  With the dark alley, poorly lit streets, an urban rooftops, it was obvious the map has Batman in mind.  Meaning this is Gotham City...

So, if this is in Gotham City, I knew "H" from the Comic Treadmill would never forgive me if I didn't do a version that had rooftop giant props.  And thus... 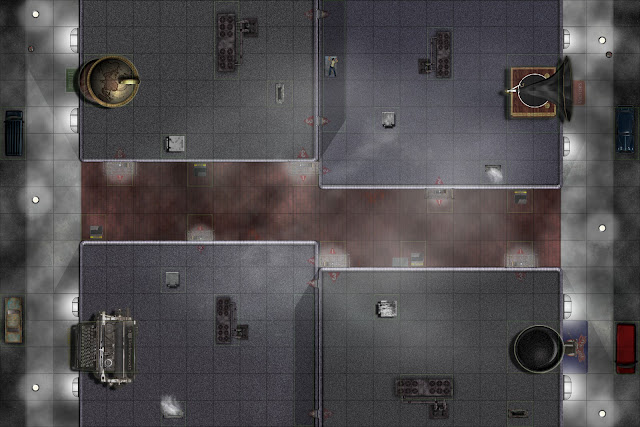 Hats. Typewriters.  Record-players.  Globes.  Mmmmm.  Giant prop goodness.  They just don't make 'em like that any more... .
Posted by Scipio at 7:30 AM 2 comments:

This issue gave us the origin of the Earth-2 Green Lantern, Alan Scott (see preceding post for information about Alan, in song).

Now, What Kids Don't Know about this story would be....it's same as his origin in the Golden Age.  Alan Scott was the sole survivor of a train wreck, after which he had a brief but exposition-filled conversation with a talking green flame.  But author James Robinson puts some very clever twists on this version (particularly the origin of Alan's ring).

I kind of teared up at the whole ring thing.. .but Alan sure didn't.  I was a little taken aback by how quickly and coolly Alan moved from "I'm badly injured and my lover is dead" to "Ah ha, I see; I appear to having my origin story now; got it."  On the other hand... (1) Alan is the powerful head of an international multi-billion dollar communications company and (2) Golden Age heroes ALWAYS recovered lickety-split from whatever horrible origin-tragedy befell them and got right into the "Whee! I have powers! Time to kick some ass!" phase of things.

But mark my words.  We--and Alan-- have not seen the last of Sam. Even though Sam is very very dead.

Where Robinson REALLY floored me was the reveal at the end.  I was ready for lots of things: I was NOT ready for that.  In fact, I was so not ready for that, that I literally stopped breathing for 30 minutes out of shock.  Then I gasped, and not just for lack of oxygen. Honestly, I cannot recalled when I was so simply stunned by a comic's end.

Bravo, James Robinson; I'm not an easy man to strike out with a curve ball; bravo.

... by killing an American Bald Eagle. 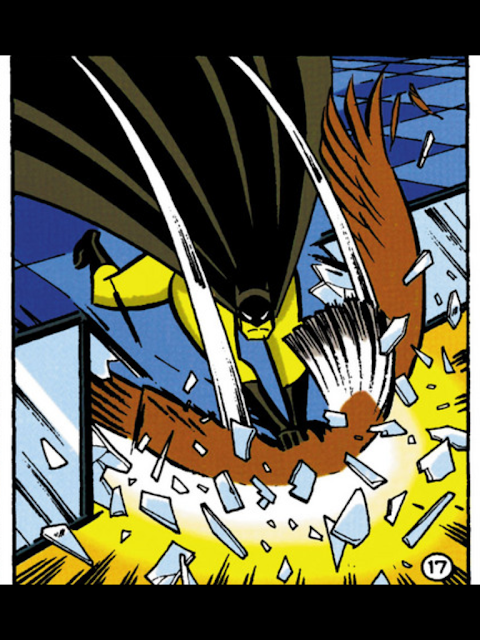 Happy 4th of July, Batman! You are truly an independent spirit.
Posted by Scipio at 3:57 PM 1 comment: