Circuses figure much more prominently in comic books and comic book history than they do in modern life.  Clearly, this is because comic books have their origins in previous decades when circuses were a more widespread form of entertainment.  They fell on pretty hard times in the 1960s and 1970s and the entire genre then took a huge turn toward nouveau cirque, blurring the lines between circus and theater.  And as I have written in the past, comics make a big distinction between circus and theater.

But back in the formative, pre-television decades of the Golden Age of comics, circuses were big stuff, and the comics reflect it.  Robin the Boy Wonder; circus boy.  The original Batwoman: circus aerialist.  Marvel's Circus of Crime.  Ragman's pre-Crisis origin (he got his powers from circus folk through science-magic) and, of course, Deadman's.  Killer Croc; circus freak.


In comics people are always dying at the circus, or wild animals are rampaging, or freaks are kidnapping/being kidnapped, or some freakish villain is using the circus as a private playground. The Joker, Two-Face, the Penguin, the Catwoman, Killer Croc, Brainiac, and more; you've seen lots of familiar villains at the circus.


So I thought it was high time that we have a circensic Heroclix map.  And, so, ladies and gentlemen, and children of all ages, the Absorbascon Circus is proud to present to you... The Big Top. 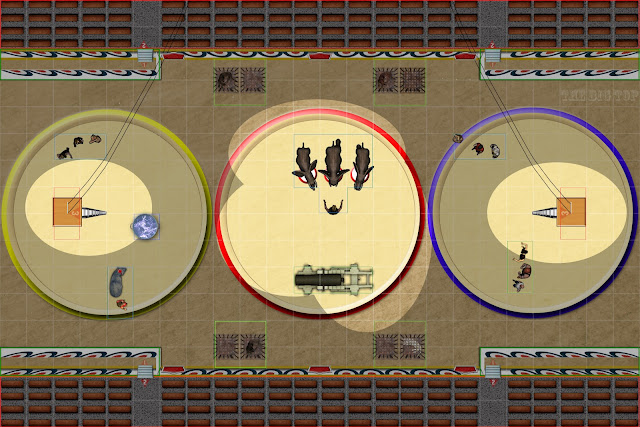 Gameplaywise, it's not all that fancy.  The stands and the aerialist poles are elevated, and there's some hindering in the form of the entry chutes, the human cannon, the animal cages, and some circus folk (who smell of cabbage).  It's not entirely realistic that even unflappable circus folks would just stand there while a superheroic battle rages around them, but, hey, without them it would be a pretty empty map.

Actually, having the circus folk flee the scene (along with elephants, lions, clowns, etc) could make it a pretty interesting battle - especially if the heroes are trying to avoid civilian casualties.