You know those times when you're stumbling along in a rainforest expedition, where you just might be lost, but you're not sure because your GPS isn't working, and suddenly you blunder into a ziggurat in a clearing, and kick yourself because your iPhone's dead and you can't snap a picture? 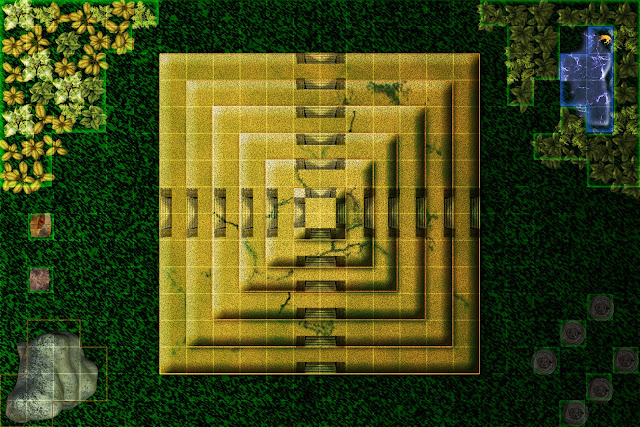 Now, before someone corrects me, this is very technically not a ziggurat, but rather a step pyramid (because it's in a jungle somewhere, rather than in the Middle East). But "The Step Pyramid" is not a cool name for a Heroclix map, and "The Ziggurat" is.

The Ziggurat Map takes advantage of a rule change from several years ago that allows for up to seven different levels of elevation on a Heroclix map.  The jungle floor is Level 1 and the other six levels are the successive tiers of the ziggurat.  I didn't mark the levels with the usual numbered triangles for elevated terrain because, well, if you can't perceive the levels of terrain on a ziggurat just by looking at it, then numbers probably aren't going to help you.

The map is quite simple in layout and feels very open; but the ziggurat in the center tends to break the play down in several smaller areas rather than one big clusterbust in the middle of the board (because I hate when that happens).

Do not go into this map with out flyers and leap/climbers on your team, or you're going to get a serious thrashing.  But deploy your Bronze Tigers and your Cheetahs and your Detective Chimps and this will be a fun map, indeed.
Posted by Scipio at 6:52 PM

It just so happens that an early issue of "All-Star Squadron" featured a fight at an Aztec step pyramid:

Now you too can re-enact Roy Thomas comics!

I have been re-reading those old RT A-SS books. They are some of the more excruciatingly badly dialoged comics ever written. Reading them makes me sad I know English.

You would say that, given your credentials as a blogger with knowledge of classical drama who enjoys performing in choral groups.

... Did I successfully capture the Roy Thomas style of exposition? Something still feels off to me. Not clunky enough?

Hm. It's missing an awkward dated reference or one-line after the expo-dump.

"You would say that, given your credentials as a blogger with knowledge of classical drama who enjoys performing in choral groups. Now I know how P.G.Wodehouse's buddies must feel!"

In his day, Roy Thomas has written some really top-notch comics, but dang if Roy Thomas isn't responsible for some of the worst. This has caused some people to speculate there are actually two guys named Roy Thomas in the comics field. I suspect there are two James Robinsons too.

And the Earth-2 Aquaman!