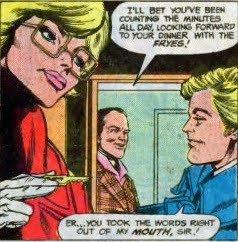 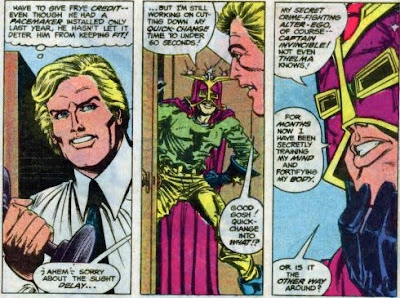 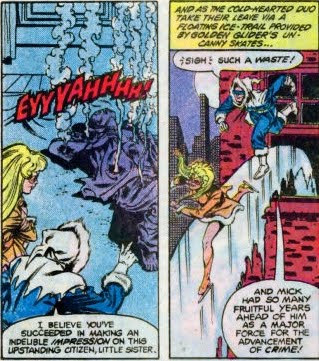 Ladies and gentlemen, the Tonya Harding of Bronze Age Earth-1. Wait, did the narrator actually just call her skates "uncanny"...?!
Which is, of course, insane.
Posted by Scipio at 8:13 AM

Wait -- Golden Glider's skates made the ice, rather than Captain Cold's cold gun? That is indeed uncanny, if I'm reading it correctly. And insane.

In the Bronze Age, ANYTHING could be accomplished merely by the adroit application of a caption box.

Of course her skates created the ice. Her brother invented them, and if you can invent a gun that creates ice, how much harder would it be to create two such guns and shape them like skates? Where else was she gonna get the ice when she was working solo? For heaven's sake, USE YOUR HEADS, people...

I think I read somewhere -- that's where I come across a lot of material, "somewhere" -- the Captain Invincible thing was based on a similar subplot in Hill Street Blues or some other cop show. I suppose it qualified as a parody of "crazed cop who takes the law into his own hands" concept that was pretty popular in the 1970s.

Well, yeah, Ronald, when you put it like that, sure it makes sense. Certainly more sense that assuming teamwork on the part of a brother/sister pair of crooks with complementary schticks. I gotta get into that Silver Age frame of mind.

In the Silver Age, the skates would have simply floated on compressed air or something.

Ah, of course, Cary "I Single-Handedly Made the Bronze Age Suck" Bates simply stole the Captain Freedom storyline from Hill Street Blues right after they killed off the character.

That's pathetic. Particularly since he was a PRIVATE CITIZEN WHO WAS MENTALLY DISTURBED, not a police captain.

Don't forget that Captain Incredible had a pacemaker and learned to channel its awesome energies into power blasts.

I just looked it up: a typical pacemaker runs on a lithium battery of somewhere between 5 and 8 volts. Just imagine what Captain Frye could have done with a 9 volt battery. Give the man a car battery and he'd be completely unstoppable.

@Anonymous - With 9 volts, he could power a smoke alarm. With a car battery, it could be a car alarm. Then he could shout his catch phrases:

"This is an Alarming development!"


Truly a force for good.

Didn't Barry once have a daydream in which Patty became Ms. Flash?? Now there's a custom HeroClix crying out to be made!!