Well, that's ONE way to solve your costume storage problems. Team up with Blue Beetle, any one?
Carter as a linguist/cryptologist.

If This Week Were a Comic Book

Caused by a recent alien attack, super battle, or attempted theft by the Injustice Society, cracks in the Washington Monument were repaired by a small crew of superheroes from different titles, probably using something like heat vision, in one panel, while discussing some other much more important problem.

On a trip to Italy to visit relatives and shatter the foreign roots of Gotham's mafia using only a crossbow, Huntress rescued Amanda Knox from a courtroom trial, using a smoke bomb and a grappling hook. Leaving behind a thumb drive full of exonerating evidence, a bound and gagged Ivorian, and three guards with arrows stuck in their firing shoulders, Huntress's parting words to the court were, "I'm bad and I'm drawn that way."

Famously transgendered vigilante The Predator flopped on Dancing with the Capes, afterwards eviscerating competitor Ricki Lake. Bouncing back from the experience after emergency surgery at STAR Labs, Lake announced, "This weight loss will help me get into my wedding dress!"

The Daily Planet reported that hundreds were saved from injury in Shangai, when Superman just happened to be in the subway to prevent some trains from crashing. For reaction from the Great Ten, who were doing nothing at the time, see related article by C. Kent.

Weather elemental Typhoon attacked Manila, but was dissipated by the Red Tornado. No one died, clean up was accomplished in several hours by an army of unidentified sponge-wielding porpoises and octopuses, and several neighborhoods were made over into Venetian-style water parks with high tourist appeal.

Congress avoids take over by Checkmate during argument over funding the Bureau for Meta-Human Affairs. "Must we go through these near take-overs every few months," Senator Graft asked, "This should not become business as usual."

China launched its first spacelab, while the Great Ten stood by doing nothing. Great Ten leader August General in Iron commented, "We wish our comrades Shining Space Lady and Companion Who Dies Horribly the best of luck in their mission."

Governor Christie vetoes tax credits for Red Hood & The Outsiders. "This is not the kind of image of dollars should be supporting," Christie opined.

After a failed override by an international cabal of scientifically advanced evil-doers, a NASA satellite fell into the Pacific Ocean, unearthing yet another dangerous undersea mystical artifact from a previously unknown civilization, causing a tidal wave that shipwrecked a callous billionaire on deserted island, and activating the meta-gene of a nearby Palau fisherman, who is now named "Diall-Chad" and was last seen wearing a dayglo spandex version of his regular native costume, shouting "MERKONG!" at local large-scale trawling ships before destroying them. The JLA reports delegating all these issues to Aquaman.

Email ThisBlogThis!Share to TwitterShare to FacebookShare to Pinterest
Labels: if this week were a comic book


How bad-ass was the Golden Age Batman?

So bad-ass that not only would he kill you...

he'd do it with haiku. 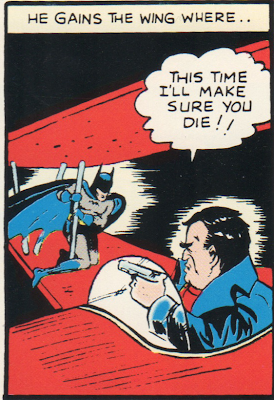 HE GAINS THE WING WHERE...
"THIS TIME I'LL MAKE SURE YOU DIE!"
KRUGER'S SHOT GOES WILD. 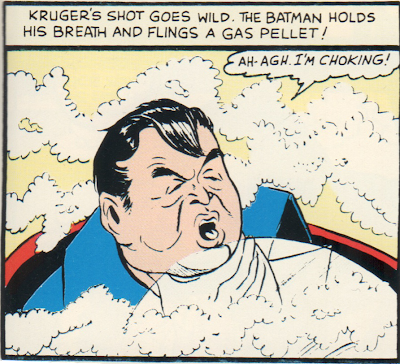 Do not mess with Batman.

I have new Custom Heroclix Maps for Sale!

For those of you interested in Heroclix, three more of my maps are now for sale at Posterbrain.


The Abandoned Church and Graveyard

Heroclix has a good many spooky characters but nowhere particularly spooky to play them (except for one stunning unimaginative graveyard map that came out with the Blackest Night set).

With the church and graveyard walls in the way, this is a hard map to get around. It favors characters with Leap/Climb or Phasing. As it happens, a lot of spooky characters have those powers. It's almost as if I'd planned it that way!

This map is designed as a fun battlefield for ocean-based teams versus land-based teams. Perhaps you Flashpoint fans can use it to pit the Atlanteans against the Amazons.


Ye Olde Benbow Tavern and the Dark Side Bar 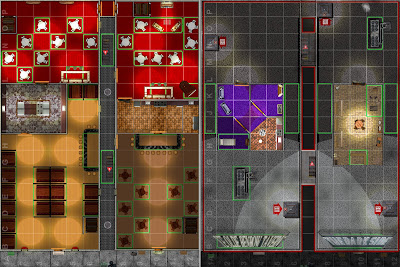 Serious fans will recognize the names of those two less-than-reputable establishments. Ye Olde Benbow Tavern was the HQ for the United Underworld in the 1968 Batman movie and the Dark Side Bar is a pub for supercriminals that appeared in Justice League International.

The left side of this map shows the first floor of each establishment, each of which has a secret room for their high-class clientele, joined by a secret passage; supervillains in the back, henchmen in the front! That's pretty much how I'd recommend setting up the game, too. Heroes should always have to wade through some mooks before getting to the Big Bad.
Several staircases and fire escapes lead upstairs to...

the roof of the buildings, represented by the right side of the map. Nestled on the rooftop are two more secret rooms; a small villain hideout-for-one and a meeting room for henchmen. And, yeah, I know there are no bathrooms, but they are kind of tedious, never see any play and take up valuable space on the map; it's a game map, not an architectural blueprint.

The "Dark Side" map features the orange borders that mark entries through a door or curtain; they block line of sight but do not block movement.

One of the features I like most in the more recent Heroclix sets is the double/triple start dials, which give one figure more than one starting line on its dials, with different point values for each. It's like getting two/three figures for the price of one, and allows you to 'scale' your game; you can play Superman as a one-man team of 300 points or as a 150 point tentpole for a larger force. It's an ingenious compromise between the scalability of the old REV (Rookie, Experienced, Veteran) system and the one-character/one-slot method of getting as many different figures in a set as possible.

I decided to something similar with this map and make it scalable, because, frankly, regular maps are often just too darned large for the games I play. When Heroclix was designed, I'm pretty sure its creators expected there to be more figures on each team than there usually are nowadays. In its early stages Heroclix was modeled off of its company's previous tabletop games, a Dungeons & Dragons type and a Futuristic/Soldier type. Both these games tended more toward swarming tactics, with lots of lower point characters duking it out on a big field. They were battle games.

But, as a game with licensed superhero character, Heroclix was a different animal. For several reasons, it doesn't favor swarming, and is more a fight game than a battle game.

In Heroclix, the choice was no longer between putting a bunch of Orcs or a Mage on your team; it was between using 10 Thugs or ... Superman. Guess who won? It wasn't just a question of strategy any longer; it was a question of personality. All the 'characters' in MageKnight (the D&D game) and MechWarrior (the Futuristic game) were made up out of thin air, with no back stories or any literary basis at all. They were, essentially, just figures, not characters. This meant choices on what to play would be based solely on tactics, since players didn't bring to the board any 'emotional commitment' toward any of the characters.

Face it, it doesn't matter what dial you give a Doomsday figure, I'm not going to play it, because Doomsday was STUPID. Is stupid. Always will be stupid. No matter how many writers try time and again to turn a plot device into a character, Doomsday was just a giant McGuffin. But make a Vibe figure, even one with an uncompetitive dial, and I will do whatever it takes to make that figure work on one of my Heroclix teams. Not that Heroclix has actually made a Vibe figure. Even though his powers are substantial and he retains high cultural recognition more than 25 years after his death. And forcing me to have two custom Vibes made. Not that I'm bitter, mind you.

Using licensed characters introduced another new factor: verisimilitude in team composition, or, as it's usually called in Heroclix, "comic book accuracy". Putting the Joker, Robotman, a Parademon, and three Weather Wizards on one team might make tactical sense, but it makes ZERO comic book sense. Putting multiple figures of most characters (with certain exception, like, say, Mirror Master) simply goes against the grain of any decent, comic book reading American and reduces the game -- meant to simulate comic book conflicts -- into a soulless series of clicking dials. If you're the kind of person who has Superman holding a Nurse or Researcher figure in front of him as a meat shield to protect himself from attacks, then you don't deserve to be playing Heroclix, and you might as well be playing Mage Knight or MechWarrior. Except you can't, because those games collapsed years ago, in large part because no one who played them had any emotional investment in the characters.

The makers of Heroclix have gotten progressively smarter about ways to increase the "comic book feel" of game and the comic book accuracy of the characters. Instead of having to represent each character using a standard set of powers ("Super-Strength", "Hypersonic Speed", etc.), they now also employ "special powers" that can represent unusual and unique abilities. Lower point figures are confined to 'generics' or 'minions', with special attributes that favor using them in groups, or with a particular character.

Original Heroclix maps were 3 foot by 3 foot, which even the manufacturers realized was silly-large for most Heroclix games; now their standard maps are 2 foot by 3 foot. But the end result is still that the maps are often a bit bigger than needed. Most of the time, the space is used not for battle but just to keep the figures far enough apart at the beginning of the game so that there's time for the players to maneuver into position rather than suffer death-by-blitzkrieg. So, I've been trying to make maps that are "scalable", like the "Dark Side" map where you can play the whole thing as a "split-level" map or just confine the battle to one half and ignore the other. In fact, you can pretend one on the buildings is all locked up and play on just one level of one building; I've intentionally designed them so that the geography allows teams to have a closer initial placement without enabling a 'blitzkrieg' attack.

I think this idea of scalable maps is a good one that will help keep my maps fresher and more versatile for games. If you have any ideas for a good setting for such a scalable map, let me know!
Posted by Scipio at 7:55 PM 6 comments: