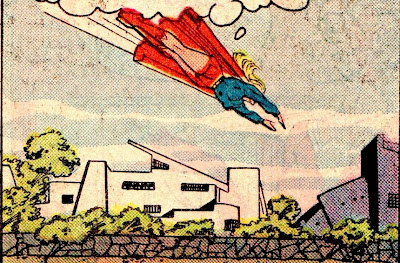 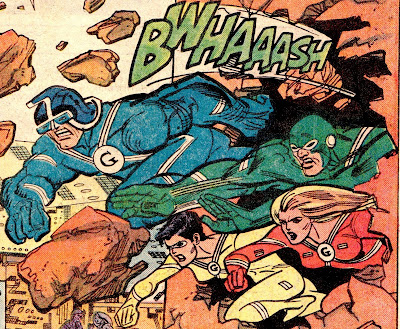 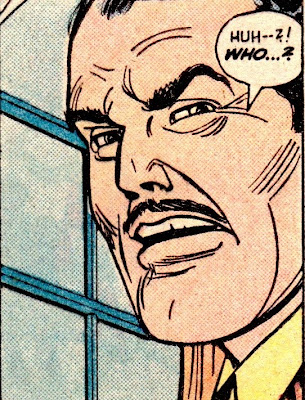 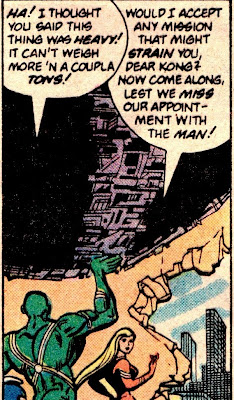 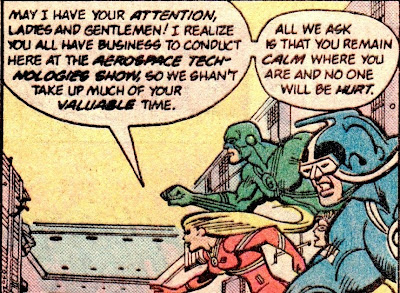 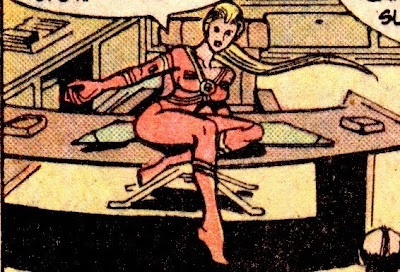 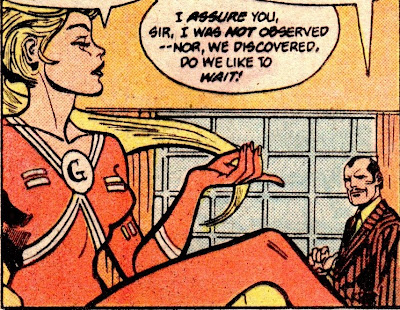 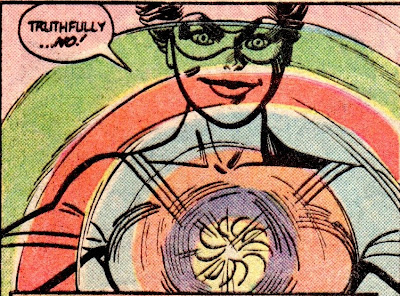 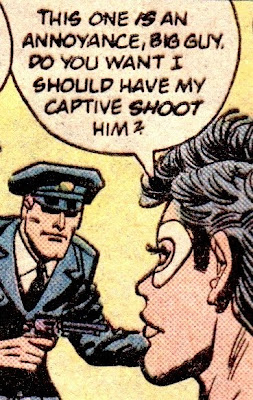 I think "Mesmer's" power comes from the fact that a color wheel is attached to a fan that is attached to her, um, attributes. Some guys would already have trouble not staring and now she's adding color and motion?

Yet she manages to hypnotize Supergirl quite easily. Makes ya wonder, doesn't it...?

So is that a horn on Bulldozer's hat or is he just glad to see Supergirl? And if it is a horn, why? Shouldn't it be a ... blade or scoop or something? Or am I just over thinking this?

My attitude is the less thinking that goes into this story the better.

Apparently, it was Kupperberg's attitude, too.

But...but I thought that the big "G" on their chests stood for "Groovy!"

And yes, Captain Jordan WOULD be a perfect name for someone using their head...as a battering ram! Haw!

And Evil to him, who evil thinks, is a perfect title.

See, comics written like this are what the Crisis should have been trying to fix, not the Multiverse.

Ah, you don't need a Crisis for that, Lmitorar; just an editor.

>>>"You want I should"? What native Chicagoan talks that way?

Uh, one whose parents were from Brooklyn and/or Mrs. Berkowitz-style Jewish?

>>>Any sentence that uses extraneous periods for emphasis. "You. must. understand."

"Worst. Generalization. Ever." Or not.

"Ah, you don't need a Crisis for that, Lmitorar; just an editor."

A good editor, anyway. DC had plenty of them in the Bronze Age, but few of them seemed to understand tone or motivation or quality. Consider the last couple pages of the JLA/JSA crossover where Mr. Terrific was killed: after the bad guy has escaped to Earth-2 in Jay Garrick's body, Jay Garrick is seen getting into the dimension travel gizmo a second time, Superman declares that the day was a victory, and there is a stupid "Superfriends" style joke about how they forgot to take down the energy barriers blocking the transporters. Even at the age of 12, I was wondering why they'd let a 10-year-old do their writing.

Barry Allen's biggest problem was that Cary Bates had written him for a dozen years, often without an editor.

I've been thoroughly enjoying your analytical pieces. Entertaining and thought-provoking as always. This site is the only place I can read in-depth pieces of such quality.

This exploration of Kupperberg's work is of particular interest because I'm very familiar with several of his comics. In particular, his Power Girl mini, his run the Doom Patrol and the Peacemaker mini (which was sort of like his Watchmen, containing supplementary material like psych reports and such). Your description of the supporting cast in your last post really put me in mind of the Power Girl mini, which had a very similar bad sitcom vibe to it. His work just comes off as super hackish- am I being unfair?

Citizen Scribbler: for whatever it's worth, when I was 12-ish, I tried to keep track of who were the good writers and who were the hacks. I distinctly remember thinking of Paul Kupperberg as "the crappy Paul" (while Paul Levitz was "the good Paul"). So I can say from experience that even a kid could be underwhelmed with Kupperberg.

Scipio, are you sure you want to devote so much Absorbaspace to the Gang? Look what I did when you introduced us to the Wind Pirate...