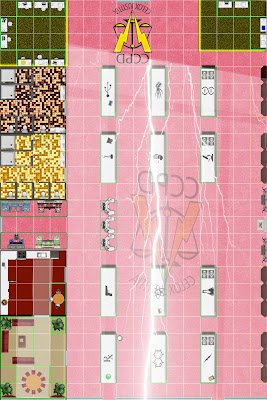 There's a lot of fun Heroclix figures in the new DC 75th Anniversary set from Wizkids, including great versions of Barry "Flash" Allen" and his grandson Bart "Impulse" Allen. They deserve a new map made with them in mind.
It may not be possible to represent Central City on a Heroclix map, but we can see a small, yet important, section of it: the Crime Lab at the Central City Police Department.
This map is based (ahem, roughly) on the lab portrayed in the recent issues of Flash, where Barry Allen now works. There's a thunderstorm outside, which is lighting up the lab dramatically.
In addition to the standard terrain types, the chemical cabinets on the right occupy special "orange-bordered" terrain. Any character suffering knock-back that is stopped by the right wall in that terrain suffers two additional clicks of damage for hitting the wall (instead of the usual one); those chemicals burn!
It used to be when I posted these maps, that you could click on them and see them in their glory at full size. But now all you can see are these indistinct thumbnails. Anyone know how to fix that?
Posted by Scipio at 6:19 AM

I click on thumb and get 1067x1600 pixel image. Either you fixed something that was wrong, or else your browser is playing tricks on you.

Yay! yes, it works now for me too