The new Aquaman cartoon on HBO Max is good fun.

Sure, it's not as 'serious', as many people, including me, would like.  Neptune knows, Aquaman always deserves to be taken seriously.

Particularly now that modern portrayals have earned him such consistent respect.

And, yes, it uses that weird art style that makes everything look chunky and ugly.

But I consider all that dressing.  I look at it more mythostructurally ('cuz I was taught that way) and on that account it's pretty much nailing it.

Aquaman (no civilian names are bothered with in the show, probably to keep in similar for any kids) has his standard backstory: son of an Atlantean princess and a human lightkeeper, raised on land, heir to the throne of Atlantis, defeats his half-brother Orm in ritual combat.  He's worried that he doesn't know how to be king and that the Atlanteans won't accept him, a lot of Atlantean customs are unknown and seem weird to him, and he perceives problems and solutions they do not precisely because of his different perspective.  His girlfriend is Mera, a fiery punch-first kind of gal, and his advisor is Vulko, who's focused on the king's administrative role rather than heroics.  Aquaman's powers sometimes get laughed at even by Atlanteans, but invariably come in handy. 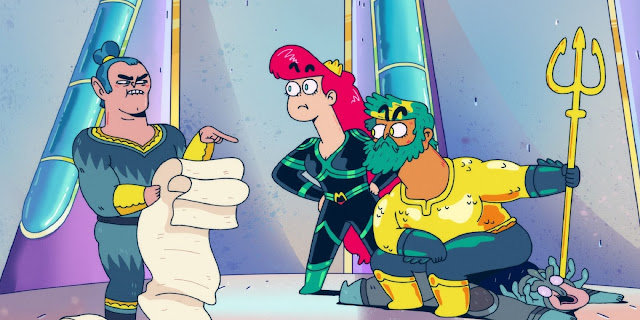 The first two episodes pit him against Ocean Master (more of a running joke than a threat), a Russian undersea driller who is basically a redux of The Scavenger, and a truly horrifying version of the Fisherman.

Along the way there's an overarching plot involving some strange crystals that will surely culminate in some grand scheme where all the villains team up.

Give it a try; it's not the Aquaman you grew up with, but I think you can enjoy it nonetheless, but the mark of a truly mythic character is that they can be presented in various ways and still remain true to their core. 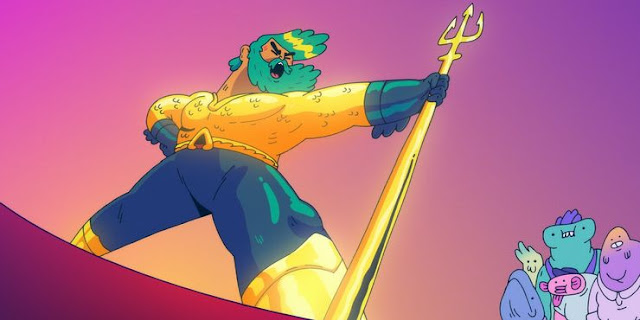 I haven't seen it (still holding off on HBO Max), but as off-putting as the animation style is, it seems to be Warner's go-to for weirdly well-researched shows that don't take themselves seriously. And I'll take goofy comedy over joyless "we decided to change everything about the character, but we assure you that every name that appears in a wiki will be somewhere in the script" style of animation that gets more resources for visuals...

The Batman: Brave and the Bold version was definitive and the first time the character was ever interesting.

Why no noses? That seems so random.

So basically it is everything I want in life.

Hey, at least he has two hands again.