I'm not even going to MENTION how stupid "President Supergirl" is...

Well, it's only one panel in and I'm already fed up with Brian Michael Bendis's writing in Legion and confused about what's going on. This is why I almost immediately stopped reading his Superman run: I simply couldn't follow what people were saying or what was going on. I suppose I'm just too dumb to read comics.

It's okay; intellectual properties last but writers come and go.  I content myself with the fact that both the Legion and the Justice Society are being re-birthed; birth is generally a painful, unpleasant, and unattractive affair, and these will be no different.

BUT I will sleep better tonight knowing THIS ONE THING about the future. That, even though it may take a thousand years... 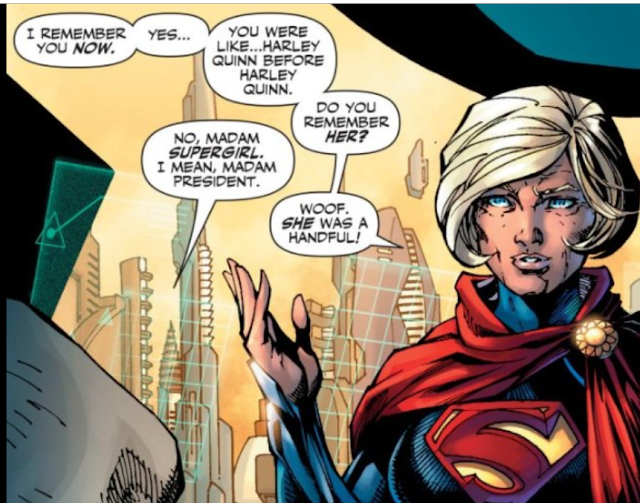 Supergirl does, after all, have political experience from her time "at the turn of the century" as Governor of Florida, so running the United Planets only makes sense. Just think, had this been published about ten years ago, it might've been President Martian Manhunter or President Luthor...
For the life of me, though, I wish I understood the popularity of Harley Quinn. The Joker's already kind of a lame character, but his moll, who has a stupider name out of costume than in (when Arlene is sitting right there!) and (in animation) sounds like she's been holding a decades-long grudge for not being cast in her high school production of Anything Goes, doesn't even make sense. Current writers are apparently doing better things with her, but it's still a concept that could've benefited from some serious workshopping...

That first panel of dialog is way dumber than anything I ever read in a Bronze Age comic (I grew up and started reading them during the early Bronze Age), and to think people make fun of old comics.

He's not a writer, he's an idol. He's beloved because he's supposed to be cool, not necessarily because of his stories or dialog. It's the same reasoning with Rob Liefeld as an 'artist' - 'coolness' and edginess are more important than story and making sense. That's why comics are still suffering from stunted growth.

Well, that was before however many reboots have occurred since her last published appearance. Maybe that's how she is now. In which case that's probably supposed to be how she was all along. I'm sure Supergirl was never anything like she is here, but she is now. This is DC. That's how it works.

Perhaps we should give Snoop Dogg, Christopher Walken, and William Shatner their own comics books, as well.

Actually, that's not the worst-sounding idea, is it? I mean, except for the Shatner part.

I would read a comic where the three of them drove around in a van and tried to solve crimes together.

Also, the engine is constantly emitting semi-toxic fumes into the passenger compartment, so the trio's crime-busting adventures are at least 15% hallucinatory in nature.

There were 2 attempts to reboot Rose and Thorn in the last decade, but neither of them were like Harley Quinn. And judging from what I saw of this comic she's supposed to be the version that appeared in the Superbooks in the 70s-90s, judging by her costume...
Which proves Bendis doesn't care about or research these characters at all...he has everybody talk like my co-workers who don't read comics but are desperate to prove they know comics history because the movies are kewl now...
Anyway, I really thought Supergirl was talking to Duela Dent since she kinda WAS "Harley Quinn before Harley Quinn." SO disappointed!

Scipio,
No Shatner? I don't know. One word per word balloon per panel? It just might work.

As a very mild defense of Bendis, by the way, it's worth pointing out that just about all of DC's writers who get a lot of concurrent assignments (Geoff Johns being the biggest example in recent memory, though Keith Giffen comes to mind before him) are criticized for weird dialogue and insufficiently respecting history in a new continuity. The American writers, at least. Grant Morrison and Alan Moore kicked over the status quo to do their own things and write some seriously stilted nonsense and get praise for it in a lot of circles. Which is all to say, maybe give him some time to settle into new titles. A bunch of his other work seems to be doing well and the Legion is a much more complicated thing to get under control than Superman, after all. And it's not like it's going to be worse than Waid's weird "unmotivated team with cultist hangers-on even though they don't do anything" version.
Criticism of writers is a good thing, but when it's the same criticism that's been leveled against other writers and those writers have been (unlike the Morrisons and Moores) adding some much-needed diversity to a DCU that's constantly getting rebooted to somewhere around 1964, it always seems to me that it's worth inspecting those criticisms. And I say that as someone who absolutely bashed Johns on exactly these terms around when he was relaunching the JSA.

At least from where I sit, Bendis is great for dialogue, for a certain type of character (like teenage X-Men). But that's pretty much his only voice.

You mentioned Waid, and it's the damnedest thing with Waid: so often he writes stories that are fine I guess, and are solid structure-wise; but they do nothing for me. Is he doing anything wrong, or is it just me? If he's doing something wrong, what is it? I have a feeble guess. One of Waid's writing principles is that every character in a story wants something, so you can improve a story by at least being aware that each character has their own desires ... but what if that's not as good an idea as it sounds? What if we're better off treating most characters as props in service to the plot? I feel like there's a balance to be struck here, and maybe Waid errs on the side of putting too much effort into side characters. Like when someone's trying to relate an anecdote, but they keep trying to flesh out the story with details, when what they need to be doing is moving the story forward.

Waid is actually a good contrast to someone like Bendis (who also created Jessica Jones, over Marvel-way, so he does have some range), because he's literally the writer who will carefully survey continuity and try to give every character an individual voice, but that seems to be where his storytelling ends, and most of his plots are either "slice of life" or, for lack of a better term, "continuity grout." (Kingdom Come obviously caught people's interest for a good long time, but to this day, I don't understand the fuss.)

Busiek gives me the same vibe of someone who'd much rather write footnotes than a script.

For Bendis, specifically, I'm taking a look at Action Comics #1001, which I believe is Bendis's first full issue on Superman. What I'm getting out of it is that it's almost written as if he expects actors to be speaking the lines. There's a opening where Superman has a beautifully condescending chat with the thugs trying to kill him. We jump to a lot of chatter and snark around the newsroom that makes it feel like a real place that doesn't exist purely to relay exposition. Then, we jump to a couple of quiet discussion with a fire chief and then a kid that are a lot more formal and less chatty. It's actually a lot better than I expected, once I started thinking of it as spoken by actors instead of a "word balloon" abstraction to read. That's something I could never say for Johns...

(The art, however, commits the cardinal sin of making Superman/Clark look like a giant on steroids, but we can't necessarily fault the writer for that.)

"as if he expects actors to be speaking the lines. "

That's an intrinsic problem. Film is a completely different medium. In some respects, a precisely opposite one, because a film director controls time and the pace at which you receive the story; that's the one thing a comic book writer doesn't control. In fact, because of the comic book page format, a reader can perceived sequential scenes simultaneously. Comic books should not plotted, storyboarded, or dialogued as if they are films and those who do lack an understanding of the medium and shouldn't be writing them.

Granting that it seems to work against the grain, it's not like we're talking about some ancient art-form with strict limitations. I mean, I can remember the days of insisting that the loss of thought bubbles was a travesty and panel grids were sacrosanct. Or that weird obsession some theorists have with Kirby's layout of having an arm or eye-line indicate where the next panel is. The norms vary and changes take some effort to get comfortable.
And it's only my subjective experience, of course, but once I started reading as if it was "out loud," I thought that one issue flowed surprisingly well. I mean, I got a lot more out of that part of a story than I get out of the usual "Grant Morrison read a Silver Age comic and wants to churn out a twelve-part series that has the same plot and says almost exactly the same thing, except uses some fancier-sounding words and tries to pretend it knows about music theory" fiasco...