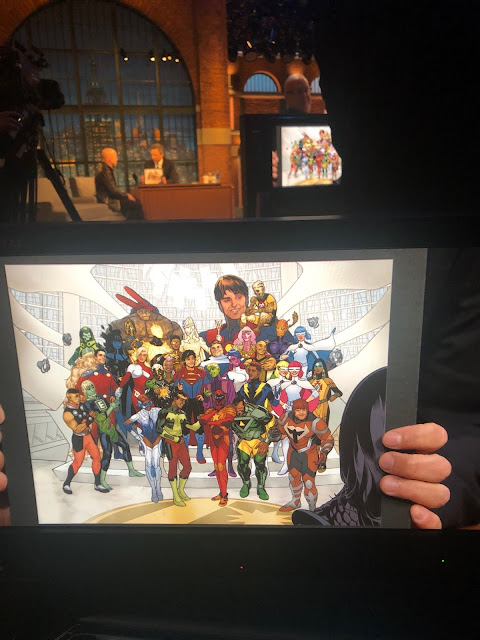 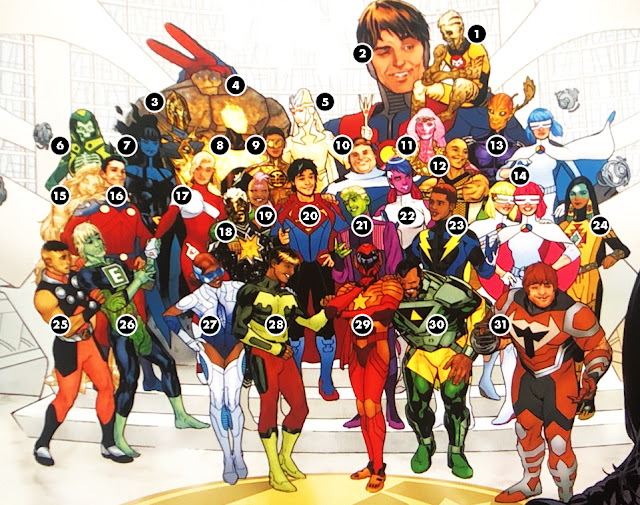 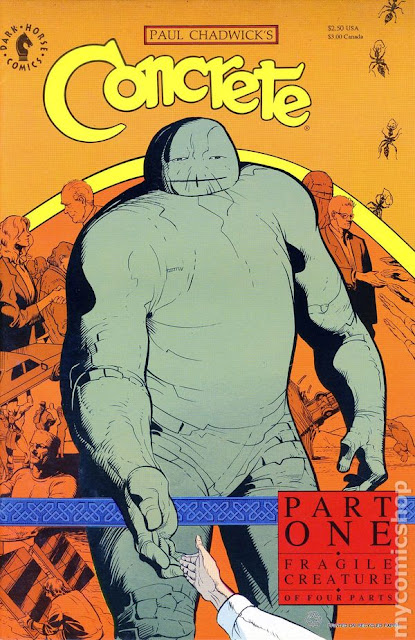 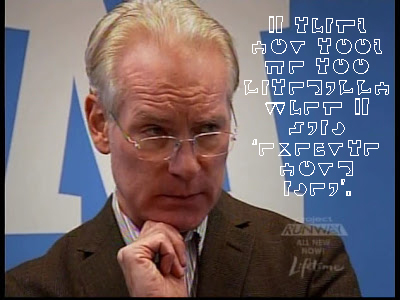 Really, the only problem with Sensor Girl is that Levitz decided not to roll with making her Supergirl instead of changing pretty much everything about Projectra for the big revelation. It makes sense editorially, but still kind of weak.

#27 also looks like Light Lass more than XS, though. I think that's a feather (or a robotic vulva, maybe), the blue in her costume looks the same as Lightning Lad's, and the faces seem like they're supposed to resemble each other.

Does the person we're assuming is the White Witch (#5) have some sort of robot hand? Or is that a staff?

#1...Catspaw, maybe? Although looking at it repeatedly and ignoring the chest insignia, the character kind of looks more fish-related than cat-related. And it's a huge stretch, but the only possibility I can see for #6 is maybe Atmos, who originally spent most of his time missing chunks of his torso.

I have to say, though, other than "Microsoft Element Lad," the designs are pretty nice, if more current than futuristic. And I like the idea of stronger connections to the current DCU instead of limiting it all to just Superman. I wonder if the reason for the Yellow Lantern and Dr. Fate, though, might be related to the Justice League 3000 title.

This would make me optimistic, as the Legion should, but... Bendis. Is he able to write a bunch that looks like this? Or will Rokk and Garth be beating each other to death with Arm-Fall-Off-Boy's severed limbs while Imra mind-wipes her teammates by the end of the first issue?

Is he able to write a bunch that looks like this?

I'd argue no. Bendis has never shown much ability to handle a large group. His style lends itself to single heroes with supporting casts, whose stories can move slowly while Bendis engages in page after page of dialogue.

In addition, he's never been able to effectively write in any other voice than current (which makes no sense but let me explain). His grasp of English is very limited to modern-day speech. You'll have future heroes using current slang that would never make it to the 30th century. Though he may throw in the odd "sprock" or two.

I've never found Bendis much good at creative battle choreography, which you need for the highly varied powers of the Legion, and is a very underrated comic writer's skill. For all the Marvel angst, Chris Claremont, for example, always provided good, intricate use of powers by interacting team members. Most of Bendis's favourite characters have been generic brawlers.

I hadn't ever thought of it that way, Unknown, but you're right. When Bendis does try group books, fight scenes are mostly "taking turns," not working together. He would never have come up with the old "fastball special." It's just foreign to him.

And I know it sounds like I'm slagging Bendis, but I'm not. He's very good on certain types of books and characters, like Daredevil or Miles Morales. But publishers keep hiring him for his star status, and putting him on books for which he's unsuited. And I also think his star status gives him editorial immunity, so a lot of his clumsiness ends up in the final product.

The only silver/bronze age members who seem to be missing are Invisible Kid (maybe he is there, just not visible), Ferro Lad, Chemical King and Tyroc. Maybe the skeleton guy in the green armor could be Chemical King? Not sure the legion needs two guys in containment suits.

Taking another look, I think Element Lad is bumping into Invisible Kid.

Here to agree with Mike S. I heard that Chemical King theory earlier and like it, as much as it makes me sad for the character. No love for him, man. And the Invisible Kid knocking over Element Lad explains the blank spot as well as Jan's posture.

Oh, and I just realized that Saturn Girl is "looking" right at Invisible Kid as well.

FWIW - when I say I like the Chemical King theory, I mean that it makes a lot of sense. When I say it also makes me sad, I'm talking about how he is possibly trapped in a containment suit (while looking like a skeleton). His history became one of sadness, since Earth War and then every single flashback story.

And, IIRC, Levitz said it was Jeanette Kahn who made the call about Supergirl. That said, there is an elegance to the Projectra solution I like. Her whole thing before was that her illusions are screwing with people's senses anyway. That felt like a logical power-up to me.

Bendis has always struck out whenever he's assigned to a comic book, based on my own experiences reading his "stories". Even his street-level stuff falls flat to me. Perhaps if another writer had been assigned to this I might have had hope here, but alas...

Sorry, but in my opinion, this just looks godawful! Also, Bendis is a crap writer. R.I.P. the Legion (but it will "Live Long" in our hearts and memories).

And I have no idea what said status is based on to begin with. Oh well.

If that's Chemical King, he may not be trapped in a suit, he may be using it just because it's more convenient. No way to tell as of yet.

On another note, since Doctor Fate's not a young adult, that can't be Doctor Fate. It's just someone else wearing the helmet. So it's *A* Doctor Fate, I guess. Or perhaps just a FATE. OSLT.

Also, could that be Quislet behind Chameleon Boy's left ear?

Upon reflection, I think they should've changed enough character designs so that at least half of the Legionnaires are now non-humanoids or at least more overtly non-Earthborn. I mean, this reboot's going to be gone within two and a half years tops and forgotten well before the reboot that will follow the reboot immediately after this one, so what have they got to lose? ;-)

I'm hoping Scipio's interest in the Legion will last long enough for him to expound at length upon a Silver Age Legion storyline or two as he's expounded at length upon Joe Coyne, the Octopus, "Jean Loring Has Escaped!," and other such concepts. That's not a suggestion, mind you, because he hates those, it's just a hope...

I swear the chest logo on #1 looks more like Timber Wolf's classic logo than the one on #31. But #1 is more birdlike. Maybe that's what Thanagarians look like in the 31st-century?

I agree with the above posters that #27 is Ayla and that there's an Invisible Kid between her and Jan.

Also, why are Jan and Imra holding hands? Wonder if the two of them and Rokk are in a three-way relationship? That'd be breaking some new ground (assuming you don't count Luornu's extra selves in her relationship with Chuck..).