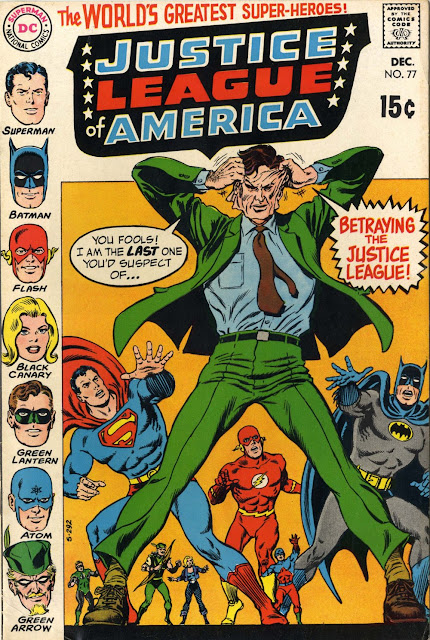 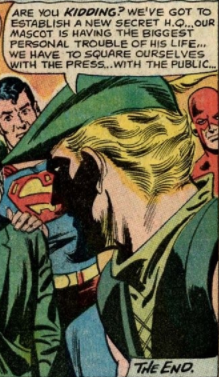 And to this day, the notion looms large in DC Comics that heroes are the problem, and other than occasionally saving the entire cosmos from extinction, what good are they?

Worse than that are the teams that basically exist to fight the villains that exist only to attack them. That's all the Teen Titans do (especially the New Teen Titans), sit around and wait for their traditional foes to attack the city to draw them out. When you could stop virtually all your enemies all at once simply by disbanding, you really need to take a hard look at yourselves.

Great series, Scipio. I trust you've got an epilogue planned, that sums up the transition between ages, future treatments of Snapper, Denny O'Neil's thoughts about what he was doing in this story, or some such?

Sally; it's okay. He's understands. After all... he's Batman

Andrew; perhaps I should!

Marvel-izing trends this story embraced
*Why must there be a Justice League? *Snapper Carr no more!
*Super-team vs real estate logistics!

Even so, this remains one of my favorite uses of the Joker! Turning normalcy and the JLA weapon hording into weaponized poetic justice to rub in Batman's face! An absurd false identity used in a plan that was just trying to ruin the heroes' reputation!

I think Joker at the end was thinking "Surely the JLA will stop me, but they can never undo the broken trust! Wait, they have an armory of weapons that can even stun Superman? Ha! I shall extend my scope a little..."