THE DCU IS WHOLE AGAIN!

So, quite a lot has been going on in the DCU, in the comics, on the telly, and upon the big screen.

None of which has moved me to write.

But this week?  Oh, this week changed EVERYTHING.

This week, as part of the ongoing fix of Superman's backstory, Superman had the Fortress of Solitude, well...tell him his own backstory.  As victim of head-injured-based amnesia myself, I was quite envious.  Of course I suppose nowadays our Facebook pages can do that for us.

Anyway, there are several interesting pieces of news in that retelling (e.g., Lex and Clark now knew each other growing up, Jonathan and Martha seem to be alive again, Clark's back working at the Planet).  Most of that I pretty much expected. 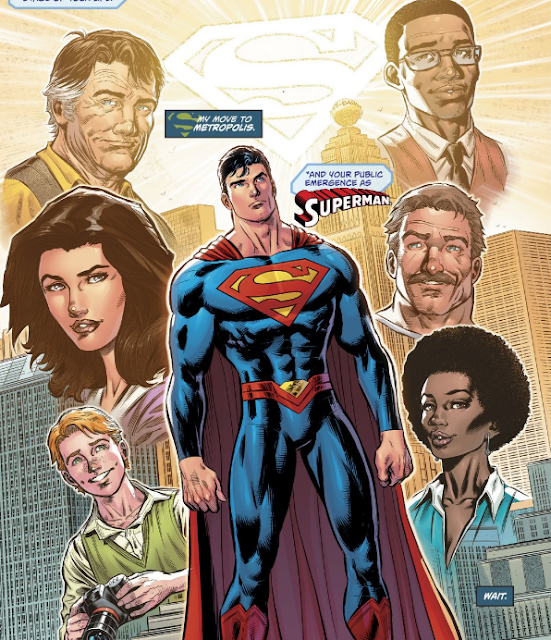 That's a spread on Clark's coworkers.
Perry White.
Lois Lane.
Jimmy Olsen.
Ron Troupe.
Steve Lombard.
And...
and...
I can barely contain myself when typing it....

I'm going to miss the Hamilton County shenanigans because Clark-as-Jonathan-Kent worked really well, but it's a small sacrifice to have ACTUAL Jonathan Kent back.

It's a remarkable thing, how wrong DC got Superman for so long, and now it's like people in creative control said "you know what? How about we write a Superman that people actually like". He's about one set of red underpants away from being exactly as he should be.

I do hope the thing about amnesia is a joke that I am too dull to get, because you are a national treasure.

It is not a joke; however, it happened before I began the blog.

YES! The Kents should never have been killed off. They provide an important family dynamic and a critical differentiator between Superman and Batman. Plus, Superman: The Animated Series. On that, I rest my case.