I play Heroclix, as most of you know, and I occasionally like to make myself maps for the game.

This is of a type I have wanted for some time: a water-based where aquatics figures can swim under a ship.  The top portion is the ship itself (the amphibious assault ship the USS Tarawa (LHA-1), as a matter of fact), with some appropriate aircraft (a Harrier, three Blackhawks, and six Hueys) on the flight deck as hindering terrain, and the bridge as elevated and blocking terrain. 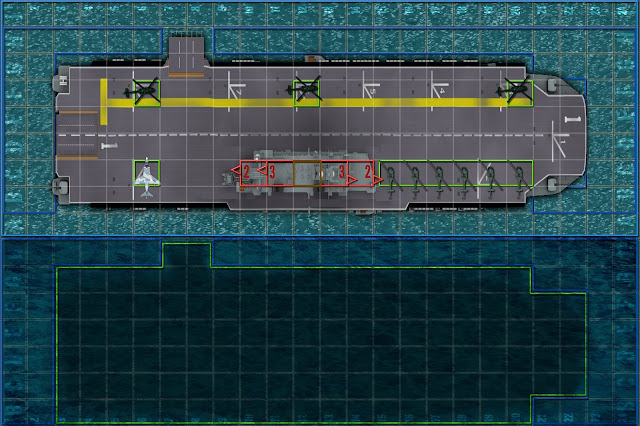 The bottom portion is the areas of the sea beneath the ship and the surface of the sea. A figure on the surface of the sea (as marked in dark blue) can 'descend' to the lower sea as part of its regular movement.  The hindering terrain under water even effects aquatic figures, who need to slow in it and have a harder time seeing, after being on the bright surface.  Landhuggers can get by on this map, but they are going to be pretty badly outclassed by aquatic or even flying figures.

Can figures with super-strength THROW the choppers and the Harrier?

Heh, that's not part of the map's design. But users can always make whatever house rules they wish!

House Rule for a Superman figure: Roll a die at the start of combat. On a 1-3, one of the helicopters is a Daily Planet chopper covering the launch of the Navy's newest carrier, which goes out of control trying to land on the windy deck (with guess who on board?). Superman has to waste the first two turns rescuing the chopper.