Lex Luthor, I owed you an apology.

When you were elected U.S. president in 2000, I scoffed.  I said it was ridiculous. I said it was unrealistic, even for comics.  I'll believe a man can fly, but not that a supervillain can be elected president.  No, even more essentially I laughed at the idea that a non-politicians, someone with no government background, a mere businessman--regardless of how successful or well-known--could be elected president.  Particularly since he didn't seem to really have the backing of either major policital party. 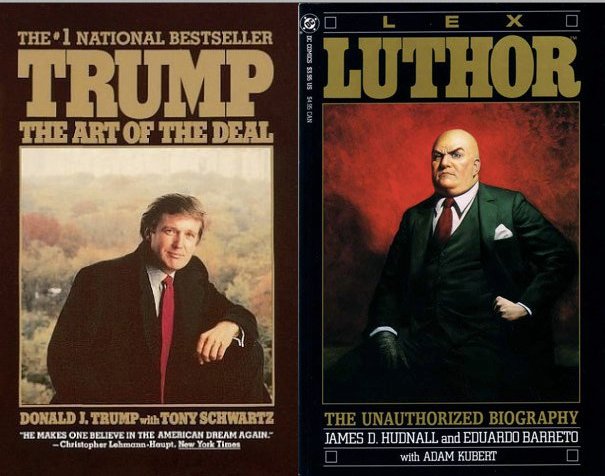 A person who runs for the presidency so clearly for no reason other than ego?  A man who's made his life's work crushing other people beneath his heel successfully portraying himself as a man of the people?  And who wins...?!

Absurd. Clearly a storyline written by desperate writers, ones more interested in making a splash than it going anywhere with a story, since next to nothing was actually done with "President Luthor".  Their only focus was in the shock value of having him elected, not in his actual agenda once in office.  Clearly a storyline written by people who simply have no idea HOW Washington works.  So naive.  Smartest man in the world or not, there's no way, Lex, you would have been elected president.

And yet, I would've voted for Luthor over either major party candidate this year. You peaked too early, Lex.

We certainly live in interesting times.

I've been arguing for months that Trump is really more like Simon Stagg than Luthor, what with Luthor being intelligent and competent and all. Although Stagg is funny, so I guess neither is a perfect comparison.

DC is known for its strong villains and Lex is certainly one. The businessman version especially so, since he is so understandable, even sympathetic in his way. A man whose life is based on the assumption that there are no miracles and we have to rise to the challenge of "rescuing" ourselves, only to witness some superpowered doofus descend from the heavens and style himself as the long awaited savior.

Whoa. Simon Stagg. That's dead on. Cuz he's the one who always seems like he wants to bone his own daughter.

Not to discount the great Stagg comparison at all, an idea I've been toying with is that Trump has capitalized on the thinking of Romanticism, rejecting Enlightenment thinking in favor of a personal, emotional world view where individuals should strive to prove that they're heroic no matter what they do with their abilities. It's interesting that Lex has a long history of the very same principles, despite his near-obsession with technology, rejecting the humanity of Superman and using everything from the Powerstone to armor to Everymen to (Supergirl's version of) the Cadmus Project to assert that he's the real hero despite any of his actions.

Wouldn't it be nice if the DCU were pushed into embracing the ideals of the Enlightenment (equality, liberty, progress, rationality) to genuinely offend the sensibilities of the villains? I mean, when even Marvel sees which way the wind is blowing, you'd think a franchise steeped in detective and science fiction lore would be all about a future that everybody feels an integral part of...

Take heart, Scipio. Maybe the recount will be successful and Granny Goodness and the creepy clown from Spawn will get into the White House.

Off topic, but since you are comparing comics and real life, I thought you might appreciate another comparison. I have spent some time in Haiti and I am of the opinion it is a little Apokolips, complete with its own Darkseid. (Aristide, when I was there.) I was surrounded by burning garbage, haitian hunger dogs, chaos, and posters praising Aristide everywhere. (Praise Darkseid!) Except for being sunny, it was a perfect Apokolips.

This is true. Horribly horribly true.

God, I am so depressed.

You're not alone, Sally.

Scipio (and I apologize that ended up anonymous - I could've sworn I used "John" as always), I started on the path after reading this Quartz article loosely connecting Trumpism with a rejection of Enlightenment values, and later noticed that Umberto Eco said something similar about fascism in general.

Those reminded me that these movements aren't just a rejection of science, comity, equality, and liberty, but is usually wrapped up in Wagnerian leitmotifs, Nietzschean assertions, Byronic heroes, and returning to medieval ideas: In a word, Romanticism. It's an assertion that "personal, emotional truths" are more important than...facts, and that the indeterminate past was glorious.

The more I look, the more I see the two positions as the major factions throughout Western politics.

(If we charitably assume that Malcolm Gladwell isn't full of crap with his connection between coffee and the Enlightenment, the "would have a beer with him" political test is eerily interesting, too.)

And while writing has obviously never been consistent, that's mostly Lex Luthor in a nutshell, too. For all his obsession in the '60s and '70s with Einstein and Newton, he somewhat consistently objects to Superman's presence for messing up "the natural order," for lack of a more DC-ish phrase. When we see another side of him (that isn't trying to precipitate World War II), he's the Wanderer above Sea and Fog, standing (in green, no less!) in his brooding, heroic pose while he Dr. Frankensteins his way through making his mark on the world.

Like the Nazis and the Fascists, Lex is excited about science and technology, but only in the service of bending the world to how he thinks it should work. Hell, he even became the hero of Lexor defending it against "villains" like a Superman who was powerless there, like traditional enemies that are inexplicably both omnipotent and powerless.

And like I said, DC could do far worse than capitalize on this division by making its heroes more representative of Enlightenment ideals. Grounding detective work in (some variation of) the scientific method, working with utopian science fiction, and so forth, DC is all but designed to do it. I'd love to see the heroes work to empower normal people instead of jealously guarding their methods and secret bases and real identities, kind of like the CW shows do, treating the mundane supporting casts as full members of the team, though they really need to get rid of their secret prisons...

We could be looking at the wrong universe. I've come across multiple articles (including a couple by conservatives) suggesting that Trump is really Loki.

Doesn't feel like a Loki scheme, not yet anyway. Trump's big trick was simply to appeal to people's worst instincts, and in doing so, he got enough votes in the right places to win. Loki would probably consider that too artless for a guy like him, unless it is cover for some other goal he's hoping to accomplish (for example to punish the hotel where he got mugged by the guy who became The Wrecker).

Funky Flashman, maybe? Or Glorious Godfrey? Bringing out the worst in people is Darkseid's bailiwick.

Side note, i was watching a "Hogan's Heroes" rerun last night, and it turns out we used to think Nazis were the enemies of America, not the most Americanest of patriots. Who would have imagined?

What? The Nazis were the bad guys? I thought it was the French because their government surrendered before Hitler's war machine. And then the French got to live under Nazi and Vichy rule for six years as hundreds of thousands got to stay in those nice concentration camps.

Look at animated Maxwell Lord instead.

Plot twist: Trump did nothing to cause this, you are the villain today.