Today's Haikuesday post returns us to the sanctuary of the Nine Unknowns thousands of years ago where the miraculous Talking Bronze Head and the Deva Solar Battery (a.k.a. "Miss Sparklejuice") have just been stolen... 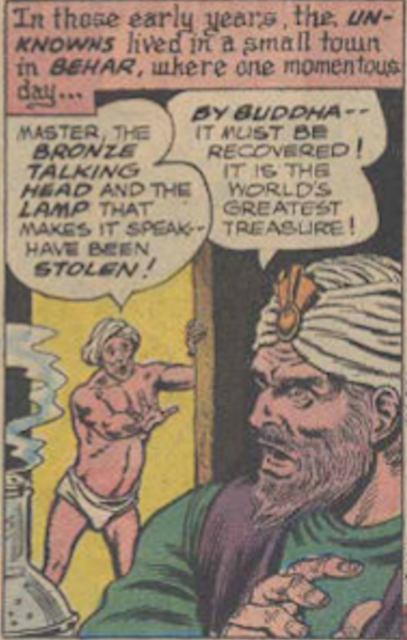 BY BUDDHA! IT MUST
BE RECOVERED! IT IS THE
WORLD'S GREATEST TREASURE!

This is how you know the Nine Unknowns are cool. Even in the most dire circumstances, such as the theft of the world's greatest treasure, they can still react in haiku.

How cool are YOU?  What haiku can you compose to celebrate the Nine Unknowns, their wondrous devices, and the general battle between the Hawk and the Criminal Alliance of the World in which they eventually find themselves embroiled?

Hawkman and Hawkgirl
Take flight to locate the Head
Lojack it next time.

The first rule of CAW:
criminal masterminds must
always wear a hat.