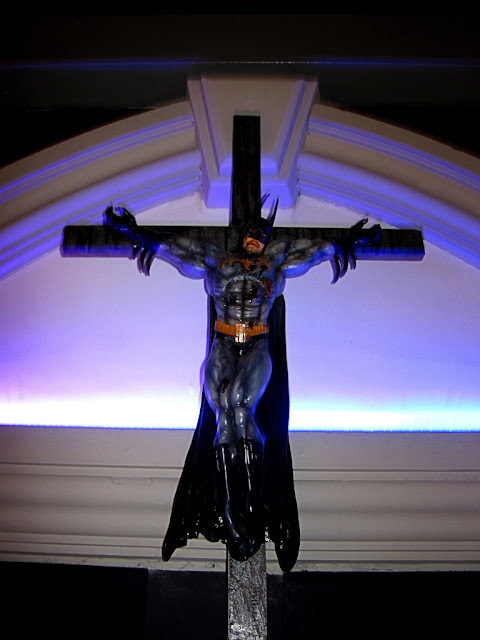 You know...I have always had my suspicions that Batman was... well... bats, but this only confirms it.

Perhaps they should name this "Resurrection" instead of "Rebirth"....

I'm less curious about Superman- or Batman-as-Jesus (since DC has generally been fixated on cramming "superheroes as modern mythology" down everybody's throats in recent years) as I am about DC's weird obsession with Batman being psychologically damaged. I would have thought all of that Frank Miller type stuff would have played itself out, by now, and we could go back to a Batman that doesn't think he's Wolverine, because that story is really boring and I think says more about the writers than the character...

There's no escaping the fact (to such extent as anything in comics is a "fact") that the death of Bruce's parents was a traumatic, formative thing for him. But in terms of Bruce being psychologically damaged, I like the note Snyder hit with it: the main thing their deaths did is make Bruce acutely aware of how we're ALL one unfortunate event away from dying. This has him deeply bugged, and he feels the need to do something about it on as many levels as he can.

I can't see Bruce as a normal, well-adjusted guy, but I can see him as pretty close to that, provided he keeps working to save lives. It's not about punishing criminals, it's not about exorcising his rage, it's about making sure as many people can make it to tomorrow as possible. It feels like a good place for Bruce to be in, where he's still spurred to risk his life but not because he's still a poor broken child.

"What's next? Sacrificing the entire DCU so that it can have rebirth as new hero...?!"

Off topic, but have you ever considered a new Central City geography piece using the Flash tv show? Last night in particular had Barry running down an "alley" as wide as a boulevard.

So someone tore down the building that was between two other buildings, thereby making the two alleys on either side of said building into one much wider alley between the other two buildings. It happens. The bigger and older the city, the more room for anomalies.

Very representative of the West, interesting!