I cannot fully express how pleased I was to read this week's issue of Aquaman (#49, by Not-Cullen-Bunn-Thankfully). 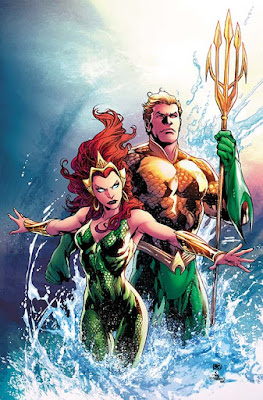 Writer Dan Abnett did everything he need to right Aquaman's sinking ship rapidly and efficiently.
He checked nearly all the possible boxes for signaling a return to Aquaman's previously schedule life and direction.  Salty the Aquadog, Tula, Murk, and Garth in non-combatant supporting roles.  Amnesty Bay smalltown life. The lighthouse, both as a physical home and as a metaphor for Aquaman.  The strength of Mera and Arthur's relationship. Mera's sense of duty. Erika the police officer.  Humanizing scenes for the entire cast (because, really, if you are from Atlantis, there isn't a reason you would know not to feed cotton candy to a dog). Aquaman running around with his shirt off at home and wearing that little necklace that makes him look like a lifeguard (oh, and Mera in towel, if you like that sort of thing, which apparently some do).  And, in defiance of the Gods of Gritty, a sense of FUN. 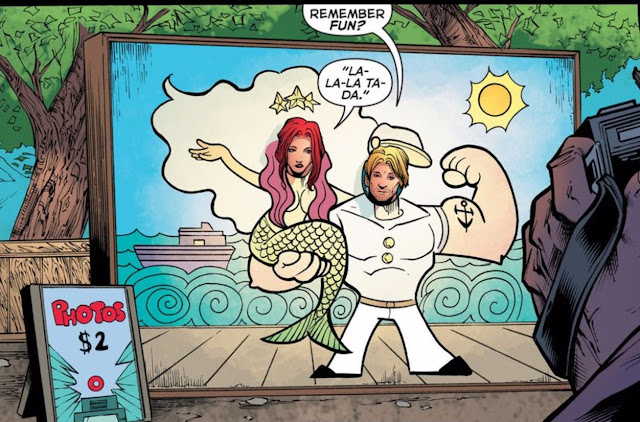 Beyond that, he hit all the beats that the plot has a sensible direction to go and that all the elements of the Aquaworld are being position for proper storytelling.  Various scary scenes of apparently random water-based attacks from barely seen monsters provide contrast to the calm domestic humor of Amnesty Bay and promise a Dire Threat from which Our Hero must Save The Innocent.  Aquaman uses his trademark combination of common sense and kingly wisdom to place his teammates on the storytelling board: Atlantis as just another country that happens to be under the sea and needs to be part of the world community, Tula as regent of Atlantis, Mera as the Ambassador to the land, Arthur as the border guard between land and sea with (I assume) Murk and Garth as his 'sidekicks'.  Abnett shows that he understand Aquaman's role in the DCU by showing that Aquaman himself understands it.  Plus some truly marvelous character work with Mera.

Sure, it's a talk-centric rather than action-centric issue. But that what was needed and the exposition, while extensive, still felt natural and discursive.

For all the many many important and positive things about the issue there's one that stands out as the MOST important:

While I have lots of hope that Johns can re-rail a lot of derailed characters in the DCU (and the DCu itself), my concern has been he can't write it all himself.  DC has to start finding other writers who can embrace the essence of their iconic characters while following and extending their worlds and stories, rather than writers who only know how to break things.

THIS is the issue that gave me hope that that can happen.

Thank you, Dan Abnett.  It's not easy to become one of my favorite writers in one issue...but you did.

Very astute about how it's not Johns doing the writing -- it's all right that not everyone has a feel for Aquaman, the point is to put someone on the book who does have a feel. So maybe it's a matter of having the right editors in place more than anything, with the authority to find an appropriate writer?

About Superman, what if Dan Jurgens were to become group editor? I'm not crazy about most of his writing, but he has a good feel for who Superman should be. So maybe promote him to editor, and use his talents where they can do the most good?

Abnett (working with Lanning) earned my respect on the Legion, and I'm certain he's up to this. I'll read this issue tonight and have more to say anon, but I was cautiously optimistic when I saw his name on the cover. Sounds like I was correct in that assumption.

One other thing I wish they'd play up: except for aliens and demigoddesses, Aquaman is the strongest guy on earth. (Maybe Abnett has done that; I haven't been to the comic book store yet.) Over at Marvel, the Sub-Mariner is considered one of the very toughest characters they've got, with only Thor and the Hulk being stronger. That's kind of how Aquaman "should" be regarded in the DC Universe; there just happens to be a much larger pool of insanely powerful characters at DC to steal the spotlight.

"except for aliens and demigoddesses, Aquaman is the strongest guy on earth"

This has always bothered me. Arthur is too frequently depicted as a human that can breathe water, and can be taken out by any random gang of thugs. I never understood quite where this came from - as a child I remember Superman tossing a bulldozer blade to Aquaman, who casually catches it, on Super Friends. So I've always thought he was one of the stronger dudes around.

Johns did emphasize that, as well as the fact that Arthur can take small arms fire with only a bit of damage (like a nick).

"as a child I remember Superman tossing a bulldozer blade to Aquaman, who casually catches it"

I remember that scene; as a seven-year-old I was like "holy crap, Aquaman is actually incredibly strong, I never knew that".

They were fighting Dr. Pelagian I believe, one of the very few supervillains with the self-confidence to wear clamdiggers.

"So I've always thought he was one of the stronger dudes around."

He is, but sadly he's usually standing next to at least two people who can lift entire continents if the plot requires it. Which is why I have occasionally recommended moving Aquaman away from the JLA and put him in a team of B-Listers, including Green Arrow and maybe a Martian Manhunter who has his sneaky powers but not his Flying Brick powers. They're not the team to take down Darkseid, but for most threats they'll do just fine.

When it comes to power levels, this is one area where I like Marvel's approach a little better, where there is a continuum of power levels. You've got normal strength (J Jonah Jameson), above average (Cyclops), well above average (Daredevil), peak human strength (Captain America (the super soldier serum and vita-rays pushed him to peak human and not superhuman and that is FINAL)), super-strong (Spider-Man), crazy super strong (Sub-Mariner), maximum super strength (Thor and the Hulk), and then cosmic level beings. At DC you've got very little between Batman and Wonder Woman; Aquaman, that's about it.

This is a bit of sidebar topic, but I'll go with. I have always wanted the JLA to have designated "combos" of their members that they employ (like the Legion did to some degree).

I agree totally with this review. It restored my hope as an Aquafan.

I agree totally with this review. It restored my hope as an Aquafan.

Yes. It's utterly senseless to throw the whole team into every situation. Also, a mix'n'match approach forces the writers to be more creative in developing menaces. It's the same old power creep -- once Superman is omnipotent, he can only fight cosmic foes. When augmented by the rest of the JLA, everything is an end-of-the-world scenario.

We need more Dr. Pelagians and less Darkseids. On so many levels.

I've been saying for years, there is NOTHING wrong with DC characters--they just need good writing. Geoff Johns understands that. DC tends to hire too many writers who don't.

Review has me excited to read Aquaman. I must admit, AM's been on my pull list all along but I haven't read any of them for months. Too dull to care about but didn't want holes in my collection. (Same for Hal Jordan Green Lantern.)

As for the "right editors," I agree completely. Too many editors looking to make their mark instead of being stewards of the franchise.

We went through this in the 1990s with Kevin Dooley, who--for his own self-aggrandizement--ruined the Green Lantern and Aquaman titles. (Yes, I hated the "harpoon man" version by Peter David.) I didn't enjoy Aquaman again until the Sub-Diego storyline.