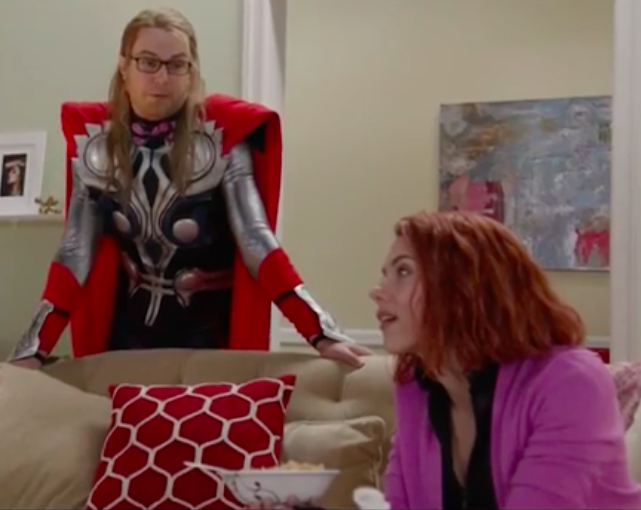 Definitely agreed. The only things they've shown to give me any reason to worry are "Captain Friendzone" or whoever he's supposed to be and a sister who just happens to work for a vague yet menacing government agency that needs Kryptonian help while undoubtedly not trusting aliens as the city is besieged with aliens. And everything else they've shown screams "just trust them."

Another difference with the Black Widow gag is that it was meant to be her entire story, whereas Supergirl's talking about doing that for about forty minutes out of probably a couple of years.

(And crap, really, Smallville was only ten years...? I I feel like I skipped half the series and still got at least fifteen years of passive aggressive, "I always put cream in my coffee, Clark, and I don't keep any secrets about it, unlike some people" Lana harangues.)

I am so jazzed for this show. Supergirl and I grew up together. Given how time passes differently in comics then real life, we managed to overlap for high school and then were in college at the same time for a while. The original version of Supergirl is my all-time favorite comic book character and this is her, modernized for the present. I can't wait to watch the show.

All solid points. I hope and trust that constant self-doubt won't be a running theme on the show; there are enough good examples of writing a woman these days that they should be able to do better than that. (The second trailer is much more promising than the first.)

I would assume that Superman put Jimmy into that machine Lois used that one time. Except he improved it so that it will turn you black AND buff.

That said, DC still does its best work on the cartoons. Just watched "Batman vs. Robin" this weekend, they managed to merge the "Court of Owls" and "Nobody" storylines together and it actually worked.

... though to be fair, why make Kara Danvers work for a powerful fashion magazine (or whatever) at all? There are at least six or seven other career paths in a big city, why give her the "Devil Wears Prada" route and try to live that sort of life?

There's a part of me that wants her to be befriended by Abby and Ilana from "Broad City".

It's a news conglomerate. Most people aren't paying attention to that because the boss is a woman.

The tradition of superheroes being involved in news media is pretty strong. Before the internet, newsreporters were the first people to hear about stuff. Instead of nowadays where they just try to keep up.

So, being a reporter of some kind helped heroes get INTO trouble as fast as possible.

Okay, I like the news conglomerate thing. But about "the boss is a woman" ... I think the problem is that Callista is being played more like Prada-Devil and less like Perry White.

Hah, I just realized that "The Devil Wears Pravda" could be an alternate title for "Superman: Red Son".

"Super Horse" is the name of our next quartet.


What was I saying?

I don't get the Devil Wears Prada issue - so basically in the entire history of film and TV, we can only have one woman in one movie who is a demanding boss? And this is Cat Grant not Lois Lane. Accounting for changing roles, she makes more sense than Not Jimmy Olsen.

I know fans of the Great Integrated Universe must be upset but I'm glad that DC is allowing their properties to be explored with multiple sensibilities across different platforms.

Scipio, the question is - "National City," a preexisting fictionopolis or a new creation?

I kind of love how TV and filmmakers are embracing DC's history of fictional cities while the people in comics desperately run away from them.

I would watch a TV show where Supergirl was governor of Florida, just btw. I imagine it as like The West Wing, but with more giant robot punching.

Mark: The times when DC wanted a proxy for Washington, they have traditionally used "Federal City". I have read "National City" in an old comic book before, but it was obscure enough that I don't remember where.

Dean: Yes, I knew someone would feel that way. And if there is a state of which a superhero would be the governor, it would be Florida.

Linda Danvers would be a much better Florida governor than what we've got.

Hey, Scipio, coming to DC first week in June. Any can't miss comic shops I should see (now that yours isn't open)?

I could't actually watch the trailer yet, kept forgetting then no internet for the moment.

That guy ins't not-Jimmy, he's closer to Bizarro-Jimmy. Pretty sure Jimmy Olsen is supposed to be:
a) Audience surrogate. Most of the audience are nerds, geeks, normal dudes, etc. Probably less than 1% of the audience is composed of black, buff male models. This might actually be obsolete - because in the Silver Age, Jimmy was needed because it was hard for the young audience to relate with the older, archieving Superman who was like the ultimate perfect authority figure.

b) A geek, nerd, total dork, etc. Barry Allen should look cool and hip next to Jimmy Olsen. I believe in keeping close in everything (including appearance), but if they want a black Jimmy, they should go with a urkel-style look - unless they want to play Not-Jimmy as one of these new age nerds who are also into getting buff and stuff (could work, but...).

c) A total weirdness magnet. Yet, while average and nerdy and sometimes even a goober, Jimmy was not cowardly, often charging head-fist into situations most people would run from.

I was never a big fan of Jimmy Olson, so they can make him whatever they want.

In a purely hypothetical world where someone in the production line leaked the pilot episode to BitTorrent sites, and were someone to then very hypothetically either not care about the copyright implications or figure he (or she) was going to watch the show when it aired regardless, and so hypothetically download and watch said leaked pilot...

In a world where all those hypothetical conditions happened to come true, it would be well worth that hypothetical person's time, because the show is amazing. Henshaw's attitude is a bit of a cliche. Captain Friendzone is too stalker-y for my tastes and (of course!) the IT guy. The flying-in-flight effects or choreography need work. Oh, and they strongly imply a few times that they don't live in the Flash/Arrow universe.

But other than that, I'm impressed and excited for the fall. They're not afraid to put women front and center of the show, and not afraid to make them worthwhile characters. It works every bit as well as you'd expect from creators that made Felicity Smoak more than just Ronnie Raymond's hot, rich stepmom who steals every scene she's in.

(And it's an older Jimmy Olsen, so the fact that he's buff and successful makes sense, at least to me.)

Hopefully, it can pull high enough ratings to stay on the air, since CBS isn't going to be happy with CW numbers.

Vartox, though? I gotta think about that one.