For those who don't know, in the recent "Ulysses" storyline, Geoff Johns had Superman accidentally discover a new power: SUPER-FLARE!

Although Jeremy Rizza would prefer: super-FLAIR.


It's like an omni-directional unfocused version of heat vision that basically incinerates everything within an 1/8 of a mile.  In Heroclix terms, if Heat Vision is Ranged Combat Expert, then Super-Flare is Pulse Wave.

First off; sure, it's a little crazy.  But for that matter, so is most of what Superman does.  Heat vision?  Wait, light comes OUT of your eyes instead of.. INTO them? How does that even work?  Freeze breath? Wait, you inhale and then, um, draw the kinetic energy OUT OF it, to make it really cold?  What?  Telescopic vision, and micro--well, you get the idea.  Suffice it to say, "Superman can do the Captain Atom blow up thing, without blowing himself up" is probably more consistent with the rest of his powers than superventriloquism.  Sure, why not?


Second: do not let Batman name your powers.  He's not good at it.  Anyone else who saw Superman blow out all the solar energy stored in him in one all-engulfing shock wave would call it what it is: a super-nova.  We've got a word that describes that exact phenomenon that already has the word super in it.  Perhaps Batman thought "super-nova" wasn't a stupid enough name for it and picked something goofier on purpose.  Because making sure that Superman seems cool--let's just say it's probably not one of Batman's highest priorities. 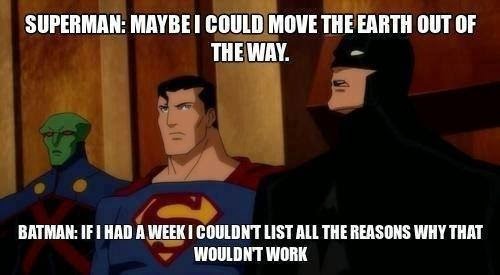 Third; it's only for extreme circumstances because he can't control it. That's good. Because being at the center of a big explosion is one of the ONLY things Shazam has on Superman, and now he's lost that edge.  He's not going to be using it in the middle of Metropolis because that would result in untold loss of life and property damage, which Superman would never do. Except in a major motion picture.


Fourth: it robs him of super-powers for 24 hours.  This is so patently absurd that... okay, I love that, actually.  It's completely ridiculous and totally Silver Age science.  Because in the Silver Age, the unit of time for ALL silver-science phenomena is 24 hours.  Aquaman can survive without water... until  exactly 24 hours have passed.  Green Lantern's ring can do anything at all ... until exactly 24 hours have passed, when it shuts down completely.  The effects of Red Kryptonite, though unpredictable, often expire after 24 hours.  Besides, it is such an unabashed set-up plot device!  Superman needs to protect his secret ID for the office physical? Superflare those pesky powers away! Oh but then.... there's an emergency! WHAT WILL HE DO?!


Fifth; yeah, you may not care, but this means Superman needs a new Heroclix dial! One that has an extra power Pulse Wave at his end dial, that double-action pushes him onto a powerless click that has Regen.  Oh, yeah, that'll happen, no question.  And it will be kind of awesome.

Super-Mathematics also lets you add an extra zero on the end, because you're super.

I can buy the Super-Flare (not to be confused with Johnny Storm's Super-Nova), but Johns is missing the point if he thinks a new power is what Superman needs. What makes Superman work is that he's human, not that he can process vast amounts of solar energy.

Everyone's favorite Superman scene from the past decade is that one in "All-Star Superman" where he talks the girl out of committing suicide. (Except for me; my favorite scene is from JSA a couple months before that, where Kingdom Come Superman caught that same girl in mid-air and thus foiled her earlier suicide attempt.) The powers aren't what people like; the kindness is.

I don't know. I just feel like it's yet another attempt (since you mention the Shazam "edge" and movies) to make Superman "edgy." Guaranteed, we'll see stories where he can't control this new ability because of Lex Luthor, he'll have to choose between destroying Metropolis and allowing Metropolis to be destroyed, using his power as an actual flare to get picked up on an alien planet while he fights off the savages without his powers, and...

OK, I just put my finger on it: This is a setup to replay plots from the Byrne Superman, but with higher stakes.

But maybe they'll do something good with it. And if it draws the esteemed Mr. Rizza back into the fold, so much the better!

Another thought: perhaps they felt that Superman, of all people, ought to have a Wave Motion Gun (or if you're one of "those" people, a "focused totality of his solar powers"):

Though I suspect Johns wants it more as a reason to power Superman down when he needs to, rather than for blowing things up.

Would still rather read a story where Superman is kind to someone who is lonely and scared, and the more I think about it, the less excuse they have for not figuring this out. Like that whole "Grounded" trainwreck, the first story was one with a jobless woman who was going to jump off a building, and Superman was going to let her die ... Silver Age Superman would have found her a freakin' job.

Christ, it's enough to make a person lose all his hair and turn to villainy.

Does he have his trunks back yet?

Johns' run was quite lame, frankly. Weaksauce stuff at best. I mean, Ulysses is boring, and people used as a fuel source for a advanced civilization from another universe? At least give us a cool explanation - like the Great World being fueled by time, therefore needing to leech people's lifespans as fuels (tie it to Multiversity's Suspedium and you're set). Also Romita art is crap, seriously. My eye hurts.

Geoff Johns used to write a smashing Superman in Action Comics, this is weaksauce.

Super-Flare should't make Superman powerless, it should send him back to Golden Age levels, because kryptonians are heavy-worlders.

"Super-Flare should't make Superman powerless, it should send him back to Golden Age levels, because kryptonians are heavy-worlders."

Good point. There's really no good reason Super-Flare should make him "human." Particularly since, in the new 52, he literally started by leaping tall buildings, etc. Also, why should he have to completely "discharge," as it were? Couldn't he just half-Super-Flare and stop?