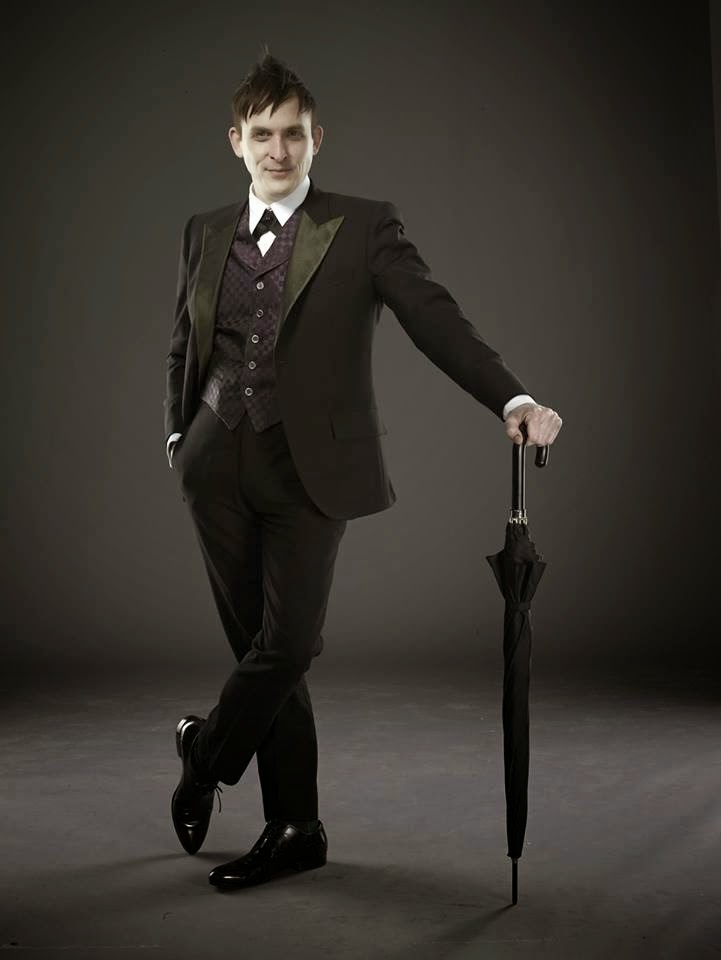 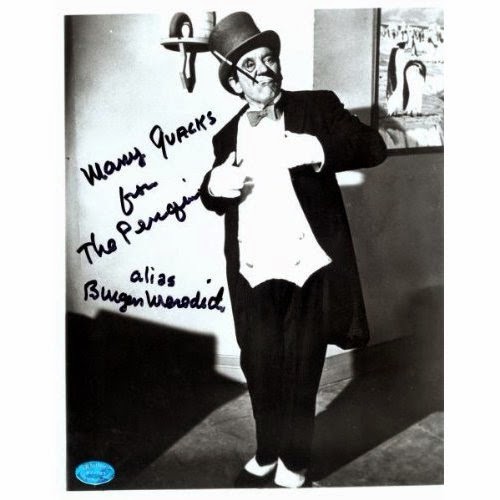 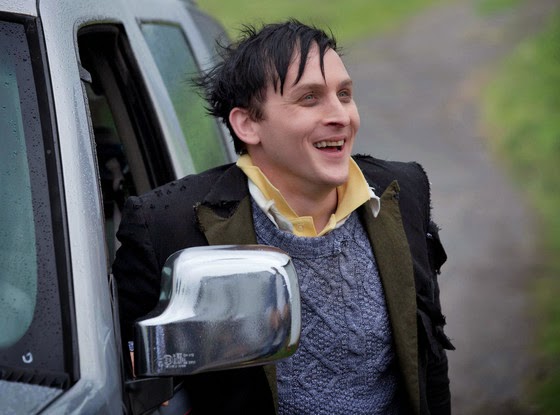 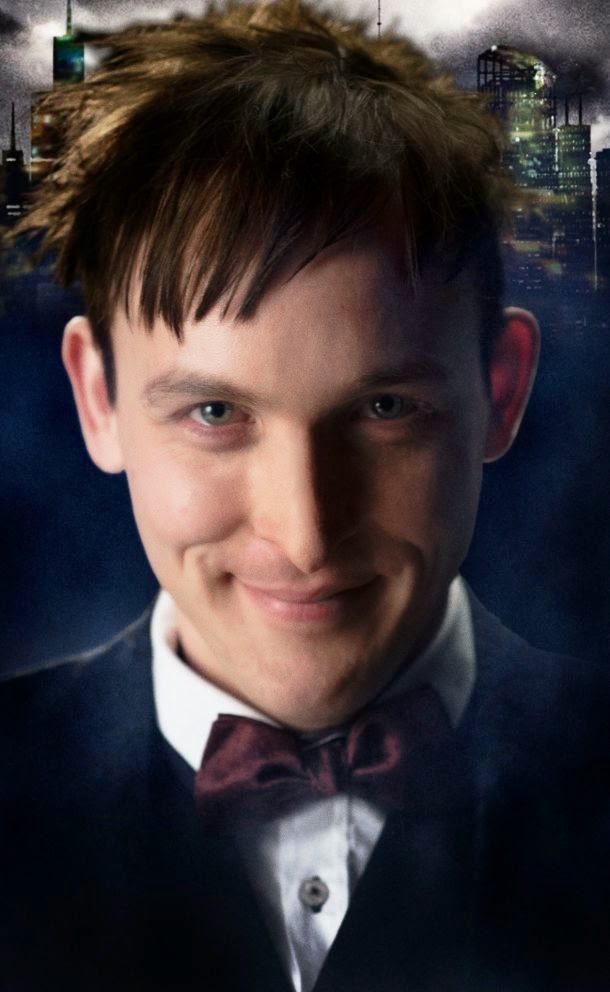 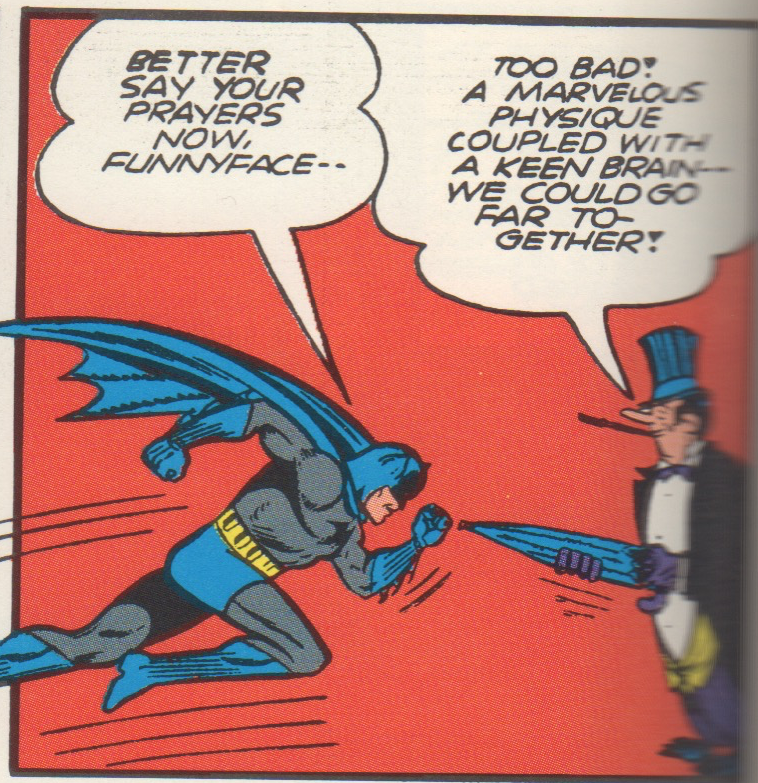 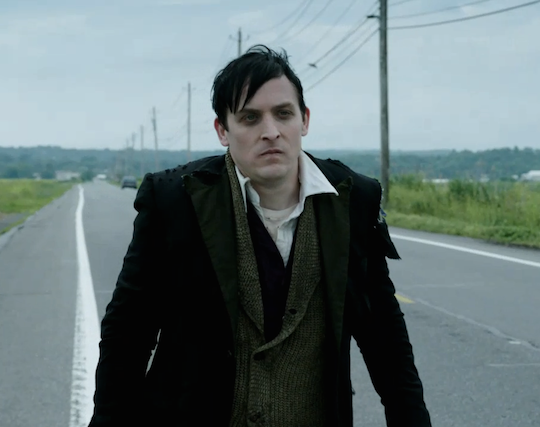 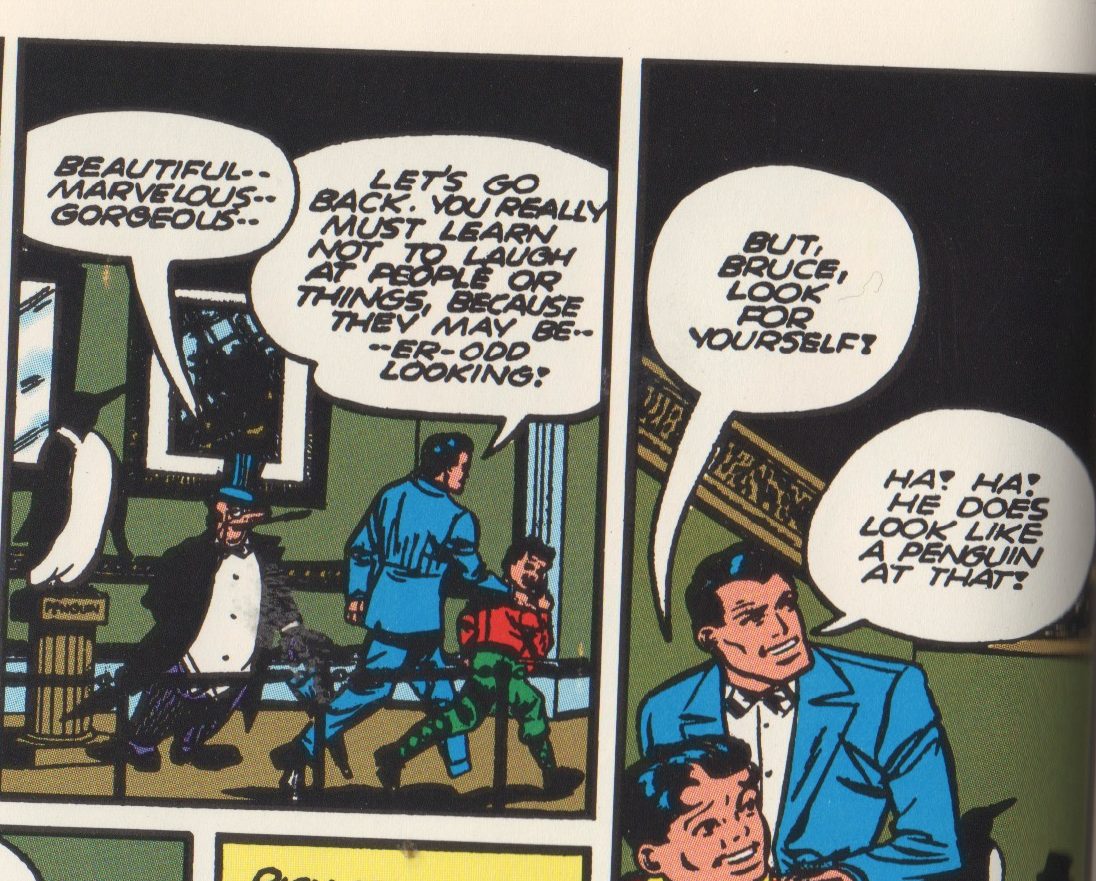 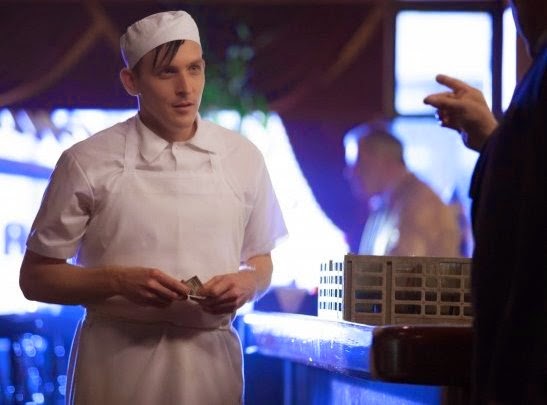 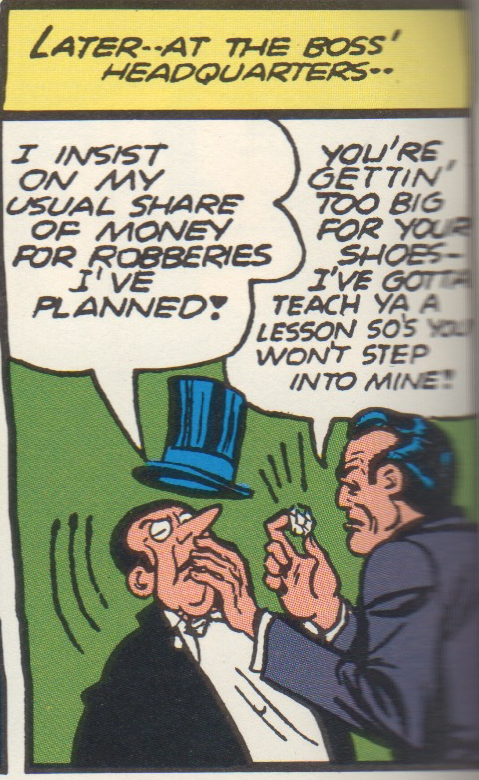 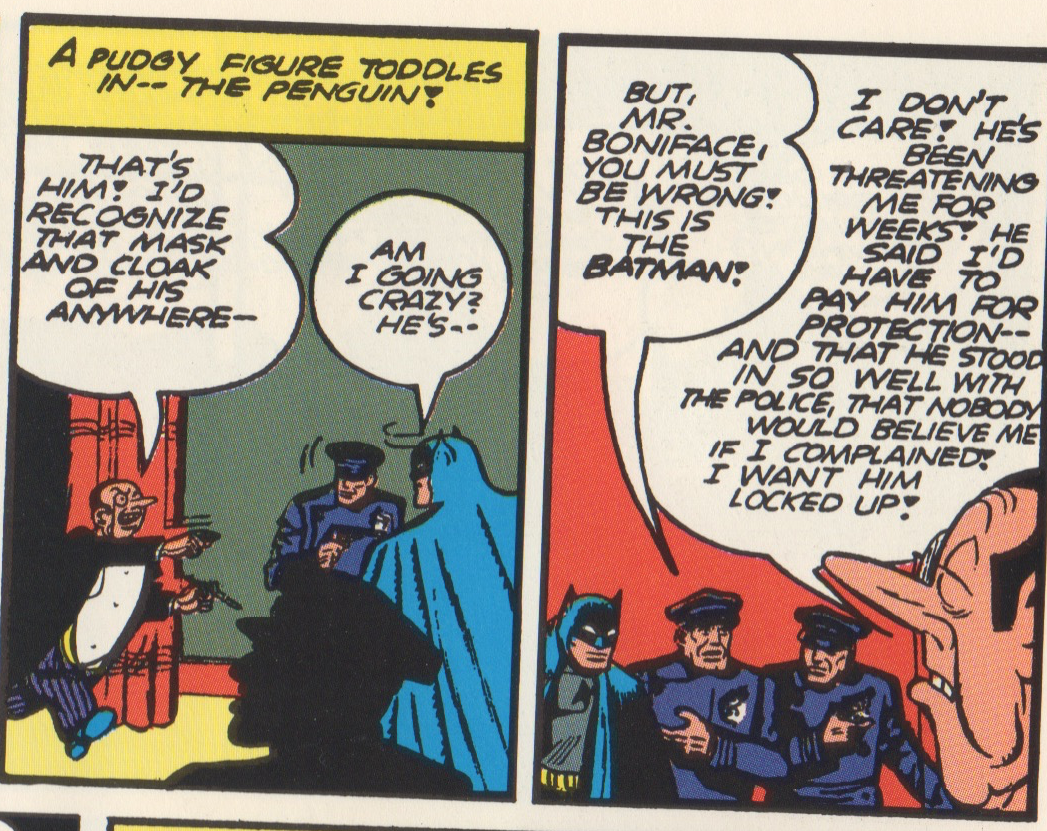 The Penguin is the best part of "Gotham". I wouldn't have thought it possible to do a live action Penguin who didn't seem like a joke, but they went ahead and did it. (Not that he doesn't make me laugh; the hand gesture and body language when he's declining a cannoli is hilarious. Oh you well-mannered scamp!)

Young Bruce Wayne getting worse and worse every week is worth watching too. Oh he's not putting his hand over flames any longer, but at the same time it's clear he's not coping with his parents' death either. And yet he's growing into the sort of man who could carry the weight of the world on his shoulders. They're handling the paradox well.

Some folks have complained that Bruce Wayne is way too smart to be a kid ... well don't forget who we're talking about here, someone who will eventually be celebrated as one of the great minds of the DC Universe.

I'm wondering about the significance of the umbrella's position in that 'We could go far together' panel...

Yeah, He's one of the best parts of the show.

Finally an adaptation that shows why he's an actual threat to the "worlds greatest detective" through a combination of brilliance, ruthlessness, and getting everyone to underestimate him.

The age thing is still bugging me. I always thought of most of Batman's rogues as being close to him in age. Here, Penguin is - what - ten years older? And Nigma - old enough to get a college degree, at least. In this timeline, Batman is less of a man in physical perfection as much as he is a healthy bully who targets old men.

What's weird to me is that anybody would think there's some sort of canonical Penguin (not a Linux reference). I feel like the only reason the Penguin is considered anything more than a Dick Tracy nod is that we all remember Burgess Meredith being hilarious.

So, the idea that this guy isn't sufficiently like the Penguin? I don't know that I'd recognize their Penguin.

The one objection I have with this actor is that the long nose, exaggerated by his fake-respectful bow (along with the wide grin) makes him look like he was cast to play Dini's version of the Joker, rather than the Penguin. But "he looks like he could also play a different character" isn't exactly grounds to dismiss him.

(I also don't care about him enough for him to be the partial focus of so many episodes, but it's not like I care for the Bruce and Alfred bits, either...)

Is there a chunk of this post missing? I feel like there was supposed to be a rejoinder to the claim that the Penguin would never kill anybody over a sandwich. (Though the Penguin I know would happily kill for a sandwich, if the murder could be tied up with a minimum of fuss.)

Observant! There is indeed.

I failed to include the scene where Penguin casually shoots his boss and takes over his gang...

All I know is that the new Penguin scares me to death...which is certainly appropriate.

Oh god, Jim Gordon's terrible terrible plan. No wonder the Penguin's running (er, waddling) rings around him. No wonder he's eventually going to have to turn to a trust-fund furry to take care of crime in Gotham.

I'm liking him fine, now that we've moved past the murdering for sandwiches/shoes thing (I still think that was unnecessary) and he's shown himself to be a cunning schemer. My biggest remaining objection is the broken ankles/funny walk. I'd prefer they skipped that part. He was already known as Penguin, so adding that seems a little too "on the nose."

And seriously, too skinny? Very few overweight people actually start out that way.

This one has stuck with me for a while:

I don't know the origin of it, but a number of sites have posted the rumor that in Gotham Cobblepot actually turns over his potential Penguin guise to someone else and becomes the Joker instead.

I think that (other than the fact I now won't be surprised) would be awesome, if just for the "this is not your dad's Gotham".

Anonymous, yeah, I kept assuming that there was actually a plan involved. "Maybe someone'll notice when we get killed" seems to be missing some meat...

Between that and Barbara, I now understand why Batgirl was always moaning about how she wasn't good enough or couldn't hack it.

Nygma' s age is an issue, but I always assumed that the Penguin was at least a decade older than Bruce. Less of an issue. What I have enjoyed about the take here is that as brilliant as he is, the Penguin almost always goes straight to murder as a solution, even if it isn't anywhere near the best solution, or even the easiest. I mean, he murdered the waiter for his shoes, even though we know he had the money to buy some! It makes him genuinely menacing. Good stuff.

Anyone else notice that in the beginning, he was working for Fish?

A penguin. Working for Fish.

Alfred driving Bruce to beat up another kid, and even giving him something to put around his knuckles ... oh god Alfred Pennyworth you are the best/worst guardian a kid could hope for.

(Spoiler: that other kid was Hush.)

What was the casting call for that one? Boy wanted with maximally-punchable face? I wanted to punch him as soon as he sat down.

It was surprisingly funny seeing Alfred light up at the end. I'm tempted to say that all of DC's post-Crisis hand-wringing over what to do about the Golden Age heroes probably could've been solved by making Alfred an ex-vigilante instead of the overly-complicated military background.

Penguin is an outcast, not just because of personality. His traditional physique showed a person whom was not blessed in any way, a physical reality to match his social reality.

Short, fat, awkward, unattractive, and damn bitter about it. THAT is the real Penguin. Not this career actor.