I've said it before, and I'll say it again:

Grant Morrison can never exceed the weirdness of the Silver Age, no matter how hard he tries.
Posted by Scipio at 11:25 PM 14 comments:

In a previous posts, we introduced the idea of the 'persona-cycle' as a means for varying the characterization of long-running comic book icons, and explored how the idea applied to Superman.
Batman, of course, has his own cycles. 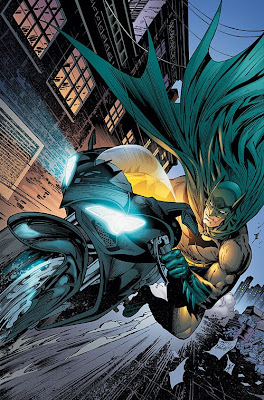 *Sigh*. No, not the Bat-cycle. I'm referring to Batman's personality cycling between vigilante/lawman, loner/paterfamilias, night/day, old look/new look.
If Batman's literary depiction were controlled by a giant sound mixing board, some of the "levels" that one could adjust to ones preference would be:
You may be noticing that Batman's 'cycles' aren't nearly as independent of one another as Superman's are. That is, there's a much greater correlation between their "settings". If Batman set at a 'low level of sanction" (operating in defiance of or at least without contact with the police), he is much more like to be a lone vigilante (low level of Chumminess), operating exclusively at night (low level of Diurnalism) in darker costume (high level of Spookiness) in Gotham only (high level of Localism).
In many ways, all these "settings" tend to be secondary aspects of one major choice in which version of Batman to portray, specifically:
Happy Batman 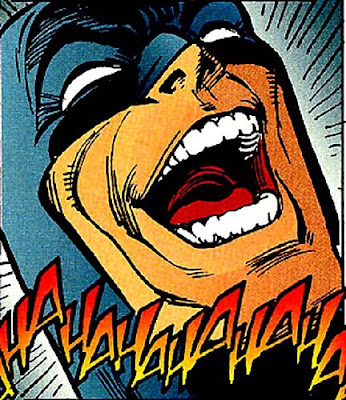 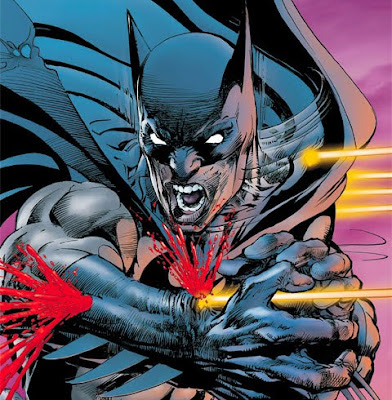 Have you ever noticed that Happy Batman is often a lot creepier than Crabby Batman?
Batman's Crabbiness factor tends to determine the rest of his portrayal. However, it's not an absolute rule. For example, when Batman left the JLA to form the Outsider, or when he was in the JLI, he was pretty darned crabby... but had a high level of chumminess because he was working very actively with others.
But there are some other "levels" to Batman's depiction that operate more independently, such as:
Whether Batman is fighting the Joker or Two-Face or their ilk is charmingly unrelated to whether he's the grim figure of the night or ribbon-cutting Batman with a platinum police badge. Batman's villains are just as adaptable as he is, and tend to adjust their levels to whatever his are at the time. I've see Two-Face torture victims and steal shipments of chewing gum; I've also seen him act at intermediary between talking statues of Napolean, Caesar, and Benjamin Franklin possessed by alien Dronndarians and the Justice League. Batman's villains are nothing if not adaptable.
At first glance, you'd think fantastical elements in Batman would be inversely correlated to whether he's being all dark and gritty. That's not exactly what happens. If Batman's depiction is set to 'dark levels' it doesn't preclude fantastical elements; it just means that those elements are much more likely to be mystical rather than sci-fi. After all, one the first thing the grim Batman of the early Golden Age does is... fight vampires.
Are there other cycles that Batman goes through in his depiction that have occurred to you...?
Posted by Scipio at 2:22 PM 9 comments: